Expressions of emotions in metal 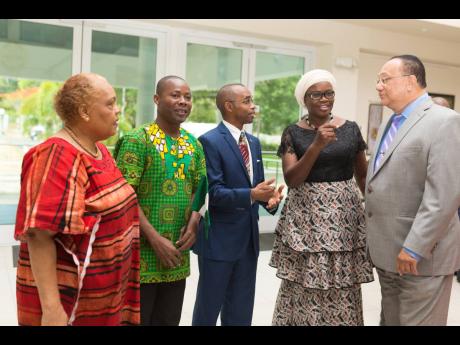 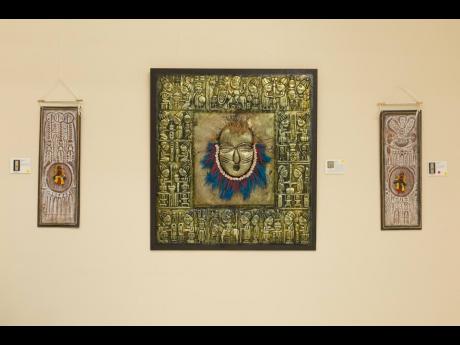 Terry-Ann Miller
Some of Alao Luqman’s works on display at ‘Stories with Metal’, at University of the West Indies Regional Headquarters.
1
2

A purple strip in the middle of a piece of repousse art hanging on the wall catches the eye of the viewer instantly. A closer look reveals that they are the tightly squeezed bodies of people – the story of the Middle Passage.

This is one of 54 pieces created by Nigerian artist and Volunteer/Cultural diplomat Alao Luqman currently on exhibition at the University of the West Indies Regional Headquarters.

Several members of the diplomatic corps, government and private sector personnel gathered for the official opening of ‘Stories with Metal’ on July 8 – a collaborative effort between the Nigerian High Commission and the Jamaica Business Development Corporation (JBDC).

‘Stories with Metal’ is a repousse collection that aims to revive and highlight the rich cultural heritages of Nigeria and Jamaica that are at risk of becoming extinct in our society, according to the artist.

Luqman said his artwork takes a critical view of traditional African and Caribbean art in social, political, and cultural practice of day-to-day life. Recycling and reusing disused lithography plates for chasing and repousse technique, the images are drawn directly on the plates, carefully brought out and detailed, given the true story of cultural life and the relations of traditional Yoruba, Benin of Nigeria, and Taino, Maroon and Rastafari of Jamaica.

“Working with disused lithography plates is something I enjoy despite its technicality. My work comes to prove that African and Caribbean art is one of the best and has a great appeal. African art is more intense and widespread than any artwork in the world, which shows a variety of styles ranging from naturalism to the most abstract stylisation,” he explained.

Luqman was appointed to Jamaica in 2017 and has worked with the Tourism Product Development Company (TPDCo) and is currently with the Ministry of Culture, Gender, Entertainment and Sport and the JBDC.

Stories with Metal also includes pieces titled ‘Resistance to Slavery’, ‘Abeng, Emancipation, Maroon Festival, Ancestral Worship’, ‘Taino Image(Zemis)’, among others. The exhibition is open to the public until July 30, 2019.