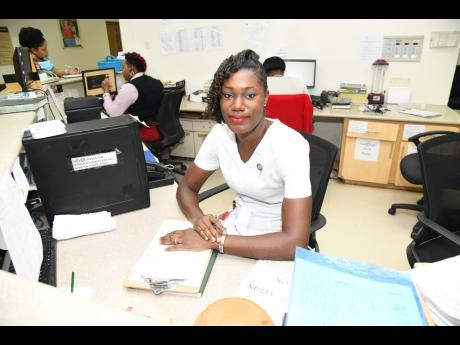 Contributed
Adine Rose-Laing rose above adversities to realise her dreams of becoming a nurse.

“When you’re a nurse, you know that every day, you will touch a life or a life will touch yours.” This comment from a retired nurse who served for years at The University Hospital of the West Indies holds true for a young woman who dreamed of becoming a nurse but resigned herself to only dreaming because of lack of financial support.

One of six children, with her father a small-scale farmer living in St Thomas, and a mother who sold bag juice and sweets at the gates of Calabar Primary and Junior High School, Adine Rose-Laing decided that if she could not afford to go to nursing school, as was her father’s dream for her, she could at least work in an environment where there were nurses. She started working at The University Hospital as a Patient Care Assistant.

Rose-Laing’s dedication to her duties caught the attention of Sister Violet Lawrence, who encouraged her to pursue Registered Nurse certification. Not having certification in mathematics at the time, she prepared herself to attend evening classes at Maths Unlimited.

She had two small children to care for, shuttling with them back and forth to school and daycare, studying while on the bus to and from work and keeping up with her full-time job while attending Math classes. She admitted to being challenged, but she had excellent support from her ever-encouraging husband, Nathaniel Laing, and her mother, who, thankfully, helped out by keeping her two young daughters when she had classes. She was successful in obtaining a distinction in Maths and was on her way to new heights. However, more challenges arose and that’s when she knew God had placed her where she was supposed to be at that point in time.

“My older daughter was five-years old at the time while the other was just a toddler. My five-year-old was on the afternoon shift at her school while I was on the morning shift at work and had to be on the job at 7 a.m.,” she recalled. “I went to Sister Lawrence to explain my predicament and she said with a warm smile, “Don’t worry. I am a mother, too, and I understand.”

“She told me to bring my ­daughter to work with me, put her in the nurses’ lounge, and let her have breakfast and then sleep, and when it was time for her to go to school, I could take her.”

Rose-Laing taught her five-year-old daughter to fend for herself. She gave her a cell phone, instructed her on how to take the bus to the hospital where she worked, and told her to call when the bus got to Papine, at the bus stop in front of the hospital.

“One day, I looked up from work to see my daughter skipping through the door. I was shocked, but she told me ‘Don’t worry, mommy. I asked somebody to help me cross the road.’”

Realising that she wanted a better future for her family, she had set her sights on joining the staff of the Tony Thwaites Wing as a patient care assistant. What she did not know was that her mentors, two senior nurses, including Director of Nursing Sister Christine Wilson along with the Director of the Tony Thwaites Wing, Marie Martin, were working behind the scenes to secure her a scholarship.

Martin directed her to the director of training and encouraged her to apply to study at a nursing school of her choice, which she did with much misgiving, knowing that she had no money to pay the fees. A month before the academic year was to begin, she got a telephone call from Excelsior Community College that she had been accepted and was instructed to turn up for the start of the academic year, and that was when she realised that the Tony Thwaites Wing had arranged for a full scholarship for her to attend the institution.

“I really believe that God always puts people in your path to guide you,” she said with fervour.

The next four years tested her mettle to the utmost. With very limited disposable funds, she often had to forego lunch. Her husband, a former security guard, had taken a position on a cruise ship and would send money back home, but it was never enough.

“They used to call me Miss Birdie at Excelsior,” she recalls. “Two Birdie crackers and a bottle of water was lunch on many days. My two friends, Tanisha Williams and Addijah Willis Walker, would offer me lunch, but I didn’t always want to take it from them, so many days, I would take myself off to the library … to distract myself from the hunger.

“The devil gave me a fight, but I fought back. My computer broke down, and I had to take out a loan to buy a second-hand computer. My big challenge was English – and you had to pass it. You could pass all your nursing courses, but if you didn’t get English, you couldn’t graduate.”

Rose-Laing benefited from a strong support system. Her friend Addijah skipped her own classes to assist with brainstorming for English.

“She, along with Tanisha, were both my motivators throughout school when I felt like giving up and then there was my husband, who also gave me that extra push. But knowing I wanted a more secure future for my girls gave me that added fuel to drive.” Having overcome challenges that might have broken a lesser spirit, Adine Rose-Laing is now a graduate registered nurse, fully employed at The University Hospital Tony Thwaites Wing and the pride and joy of especially her mother.

“I am the first person in my ­family to become a professional,” she beamed. ” I want to buy my mother a house and for her to stop selling at Calabar School gate, but she is adamant she wants to stay where she is, but she introduces her daughter ‘the nurse’ to even people I have known since I was a child.”

Adine Rose-Laing’s dream has become a reality through the ­helping hands and hearts of two senior nurses and the manager at the Tony Thwaites Wing of the University Hospital.