Artists struggle to save Haiti museum after 2010 earthquake 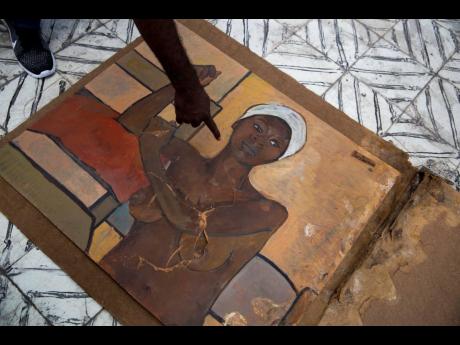 Franck Louissaint sighed and frowned as he stepped on to his patio and flung aside shower curtains protecting a painting by a former voodoo priest who became a renowned Haitian artist.

The painting from the 1960s once depicted a seemingly joyous voodoo spirit known as a loa, but it warped into something that looked like a three-dimensional satellite image of mountains after it was damaged by rubble and waterlogged when a 2010 earthquake hit the museum where it was displayed.

“It’s like the skin of a crocodile!” exclaimed Louissaint, an artist who expects seven more months of work to fully restore the painting by Robert Saint-Brice.

It is one of dozens of well-known paintings that artists are still ­trying to rescue nearly a decade after the magnitude 7.0 quake killed an ­estimated 300,000 people or more and struck countless buildings, including the Museum of Haitian Art of St Pierre College – one of the country’s top institutions. More than 600 other watercolours and paintings by prominent artists are still in storage and in danger of decaying as a small group of artists struggles to restore the damaged works.

While life has begun anew for much of Haiti since the quake, the museum has been shuttered for nine years and only recently opened a tiny room to display a small ­quantity of art.

On a recent day, 91-year-old museum president Louis Du Bois walked briskly through the building, pointing out the damaged roof and walls as he occasionally put on his glasses to inspect certain paintings.

“We have to reopen to the public,” he said. “All the great artists are here.”

The quake also devastated other public spaces dedicated to art across Haiti, with US$30 million in losses reported at the Museum d’Art Nader, which had one of the world’s most extensive collections of Haitian art.

But the Museum of Haitian Art is one of the few worldwide to host Haitian paintings from the 20th century. The museum, which previously drew 9,000 visitors a year, was established in the 1970s by art lovers to commemorate US painter DeWitt Peters and is tucked into the southeast corner of Port-au-Prince’s historic area. It features mostly donated artwork.

Fewer than a dozen paintings are currently on display, including one titled ‘Marriage of Interest’ by Rigaud Benoit, who is considered a master of Haitian painting, and ‘Tower of Babel’ by Préfète Duffaut, whose work was collected by Jacqueline Kennedy Onassis. Both men also painted murals inside a cathedral in Port-au-Prince that was flattened by the earthquake.

The museum’s oldest painting dates to 1945 and is by seminal Haitian artist Hector Hyppolite.

The Smithsonian Institution has helped the museum restore some paintings, as has the Louvre, which also donated 1,000 copies of a ­catalogue illustrating all of Hyppolite’s paintings so local officials could sell them to help generate money.

But the museum still has blank, white walls, with hundreds of works stacked in a narrow storage area exposed to heat, humidity and other dangers. They are taken out only for the occasional cleaning while the more than 30 earthquake-damaged works are being restored.

Among those needing attention is a 1960s lush jungle scene by Jean-Claude Toussaint, which is nearly ripped in half and also slashed diagonally. The painting remains rolled up with yellowed masking tape that has lost its stickiness.

Du Bois estimates that the museum needs US$50,000 to ­reopen, noting that the roof must be fixed and the electricity repaired before additional paintings can be displayed.

For now, he and others are ­relying solely on the restoration efforts of artists such as Erntz Jeudy of nearby Quisqueya University.

Jeudy recently sat in front of a 71-by-79-inch (180-by-200-­centimetre) painting by Miami-based artist Edouard Duval Carrié titled ‘The Republican Army of Santo Domingo’, which was stripped down to blank canvas in certain areas.

“This means a lot to me because it’s the restoration of a very rich heritage,” he said. “It’s great to be able to work and transmit this to future generations.”

It’s a feeling familiar for Louissaint, who works up to 10 hours at a time to restore Brice’s painting. He said it makes him proud to have permission to touch such artwork.

“It’s the story of the old Haiti,” he said. “It starts to live again.”