Bonding through arts and culture 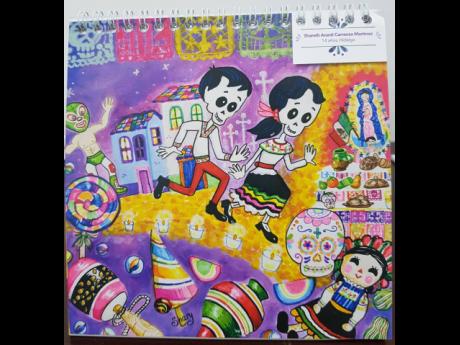 “Feet,” once said Mexican painter Frida Kahlo, “what do I need you for when I have wings to fly?” – True, ‘cause imagination is meant to soar, go beyond the perceivable, explore places, connect with people and experience cuisines and cultures.

What could be a better way to bridge the lacunae of the human perceptions and interpretations than to bring the children of the world closer to each other.

Este es mi México (This is my Mexico) – an initiative of Mexico’s Ministry of Foreign Affairs, through the Institute for Mexicans Abroad (IME) – has, for the last 23 years invited children around the world to a drawing contest to give flight to their ­imagination, dab colours, and create artwork that, essentially, is their perception of Mexico, her culture, people, and the arts.

The theme for this year’s contest is ‘Mexico’s Idols and Personalities – Who Has Inspired You the Most?’ Kahlo and footballer Hugo Sánchez are the leading personalities that the schoolchildren have idolised.

“Mexico is not only an integral part of the Caribbean, but also intrinsically connected – historically, culturally, and politically – with Jamaica,” said Ernesto Malda, deputy head of mission, Embassy of Mexico in Jamaica.

“This competition (Este es mi México) is more than a painting competition,” Malda said. “It encourages students from around the world to learn more about Mexico and its rich culture in an engaging way.

“Indeed,” he added, “children are among the best cultural ambassadors.”

Each year, 40 art pieces are chosen to form an exhibit, which is inaugurated in Mexico City. The exhibition travels to several countries around the world.

“This year,” Malda said. “students were encouraged to learn about their Caribbean neighbour by drawing or painting their favourite Mexican personality who has made valuable contributions to the world in the fields of art, history, science, sport, technology, politics, or business.”

From Jamaica, five entries were selected from artwork submitted by schoolchildren ranging from six to 14 years old. Twelve winners will be selected (based on a public vote), each of whom will receive a diploma: the winning entries will also be featured in IME’s 2020 calendar. Voting will take place from August 12 to 16 on the Facebook page of the Instituto de los Mexicanos en el Exterior (IME).

In 2016, the theme was Mexico: A Caribbean Country, and the competition was won by Ebonique Taylor, a student of the Drew’s Avenue Primary School, with her entry “The Colours of Mexico and Jamaica”.

Taylor was awarded a trip to Mexico with her mother. It was her first time traveling outside of Jamaica. She was able to visit a children’s museum and Mayan pyramids, among other sites.

Apart from this initiative, Embassy of Mexico reaches out to schools across the island to complement the Spanish lessons by highlighting the arts and culture of their Caribbean neighbour.

The embassy organises periodic screenings of films and cultural activities. One of the key highlights is the observance of Day of the Dead, (Día de los Muertos), which encompasses rituals honouring departed souls.

Día de los Muertos dates back to the Aztecs, who believed in the cyclical view of the universe, where death, is absolute and an integral truth of life.

The belief goes that when a person dies, that person travels to Chicunamictlán, the Land of the Dead. According to the History Channel, only after getting through nine challenging levels, a journey of several years, can the person’s soul finally reach Mictlán, the final resting place.

In Nahua rituals honouring the dead, traditionally held in August, family members provided food, water and tools to aid the deceased in this difficult journey. This inspired the contemporary Day of the Dead practice in which people leave food or other offerings on their loved ones’ graves or set them out on makeshift altars called ofrendas in their homes.

Observance of Día de los Muertos is also significant to dispel myths and misconceptions around rituals, which are more encased in spiritualism than ­voodoo practices.

A traditional altar – with three levels, is built with candles, ­marigold flowers, bread, and items that reflect the personality of the person’s life – is prepared, and that person’s life is celebrated.

“We (Mexico and Jamaica) have so many things in common. There is a lot we can learn from each other’s experiences and critically develop strong bonds through the culture and arts,” Malda said. “Initiatives like Este es mi México help to bring children closer, and we would love for more Jamaican school children to participate in the future as we strengthen our relationship.”