An ode to Caribbean life and people 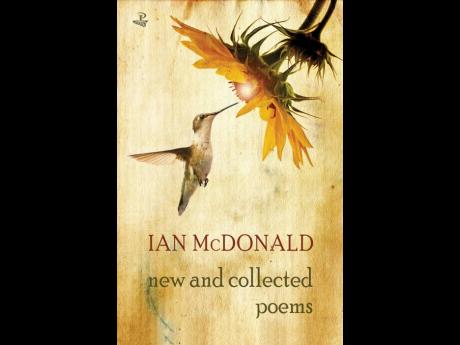 In his New and Collected Poems (Peepal Tree Press 2018), we travel from Ian McDonald, the dad watching his new-born son sleep to Ian McDonald, the grandpa, watching his granddaughter sleep; from a young man marvelling at the mystery, wander, and beauty of life as he studies on the banks of the Essequibo River in Guyana, to a man in his senior years still spending copious time with nature, whether by the river, or in his wife’s garden, admiring and wandering at the mystery that is nature, that is life.

Utilising sonnets, free verse, various forms of rhyming schemes, rhythm, whether iambic pentameter or other forms, dwelling on the various representations of love, whether paternal, maternal, eros, or the ever-present love for nature and sport, the over 400 pages of poetry is indeed a rewarding read.

Having read McDonald’s newest collection, you get the feel of the quintessential Caribbean man who loves his country, loves and is grieved by the West Indies Cricket Team, having witnessed its glory days and who, in his 80th decade, leaves for his Caribbean family a gift of his collected works.

Apart from the obvious mastery of the poetry-writing skill, which McDonald shares with his contemporaries such as Mervyn Morris, Eddie Baugh, and the deceased Wayne Brown and Derek Walcott, what is constant in the collection of six anthologies and his new poems, so seven in all, is the poet’s caring heart.

From the poems of his youth in the collections Jaffo the Calypsonian, Mercy Ward, Essequibo to those of his middle and senior years, collected in Between Silence and Silence, The Comfort of All Things, River Dancer and New Poems, McDonald’s real and not affected concern for the welfare of others, including animals, is a common thread and a reminder that much of poetry looks at and reflects the heart of the poet and mankind in general.

State of the heart

In the Mercy Ward collection, for example, McDonald, through his fine writing, introduces us to the aged or poor and dying in the ward of a hospital that we otherwise would not have met and come to know. In Fuss-pot we meet an old woman “who never stopped complaining”, for whom “the food was bad or salt or made her sick,” and for whom “water had the bitter taste of aloes in her mouth. The bed was lumpy or flea-infested, the light was bad, and the place was either too hot or too cold, and so on. However, at death’s door,

She takes on strength and certainty and love,

She summons seriousness in place of spite.

Death for her is drama worth her while,

too big it seems to make a fuss about.”

In Nurse Guyadeeen and the Preacher, also in Mercy Ward, we meet the preacher man who had the daily cuss-out with Nurse Guyadeen, but whose death, said nurse mourned. Yes, she uttered “the good riddance” expected from her mouth when she came on her shift and heard he had died at noon, but she also ”cried a little bit”, after “making sure the night lamps were all lit”.

Linked closely with the state-of-the-heart theme is that of honesty. McDonald’s poems are beautifully and painfully honest. In Testimony, Life Goes Off in All Directions and other poems, we see the poet, who writes often autobiographically, putting a mirror up to the moments in his life that he knows that he was not as kind as he should have been or did not do as much as he could have done.

See the lines below in Testimony:

I saw a child, a thin girl, about six,

Carrying a weight of water, two pails on a stick.

She made staggering, small steps; the water splashed

and wasted in the burning sun.

I could not bring myself to run to her,

I told myself it would be no good;

The child would be frightened, drop the pails.

Whatever good I did in my life is cancelled

by such deeds, these anguished memories.”

Below is from Life Goes Off in All Directions:

Dog barks loud. I shout down: Don’t want any.

He walks on, right arm severed at the shoulder.

Later, I ask my wife if we needed plantains.”

Another poem in which honesty plays a main role is Betrothal. McDonald, though born in Trinidad and Tobago, is Antiguan by ancestry and lives most, his life in Guyana.

In Guyana, and also Trinidad and Tobago, practices common to the Indian culture are a given. In Bethrothal, set in Guyana, McDonald, who’s ancestry is not Indian but more Caucasian, seems to have friends, or neighbours, along the Essequibo who have promised their 15-year-old daughter to the goldsmith’s son, who is thirty-four. Ensuing from that situation is a finely crafted poem with a brilliant, pungently honest ending.

Parents want the best for her:

cows and coconuts up Essequibo Coast.

The thing is done, families agree:

a marriage is arranged for all to see …

She will not talk to family or friends

except to say she does not wish to live

If this be the burden of her days:

… All are summoned against this stubbornness:

I say the sensible things I must

storm-light on a sunless shore.

“She is young!” What does she know of life!”

Yes, she is young as the new moon,

green as young grass after rain,

but what she has is her heart –

…And yes, she will kill herself

should you bring this goldsmith’s son of yours.”

McDonald has achieved much. In 1970, he was elected a fellow of the Royal Society of Literature, and in 1986, received the Golden Arrow of Achievement Guyana National Award. In 1997, he received the Honorary Doctors of Letters for services to sugar, sport, and literature from the University of the West Indies. In 2009, his selected Poems was short-listed for the Royal Society of Literature Ondaatje Literary Prize. He won the Guyana Prize for Literature (poetry) in 1992, 2004, and 2012. In 2013, he received the Theatre Guild of Guyana Lifetime Achievement Award, and there is so much more, including being member of the 2007 West Indies Cricket Board – elected panel, chaired by former Prime Minister P.J. Patterson – to report and make recommendations on the governance of West Indies cricket.

With all that, however, the book reviewer’s main focus is the book at hand, and so from marvellous lines on death, life, love to bringing the appreciation of and the mystery of the Essequibo River right to the reader’s fingertips, through poems that are often spellbinding odes to nature, Ian McDonald’s New and Collected Poems is a book that rewards, over and over – must have.

- Ann-Margaret Lim is a poet and author. Her collection of poetry, ‘Kingston Buttercup’, was among the Bocas Prize 2017 poetry shortlist. Her books are available at Bookophilia, amazon.com, peepaltreepress.com and various outlets islandwide. Feedback: annyinpin@hotmail.com