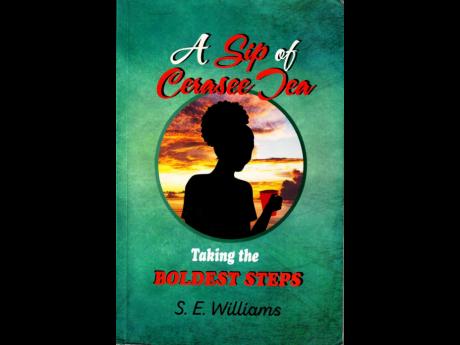 In A Sip of Cerasee Tea: Taking the Boldest Steps, we see the author, Sandra E. Williams chronicling the life of a young woman – Sanaa Wallenston –whose social awareness awakening coincided with the lead up years to the 1980 election in Jamaica.

Since there is no author statement confirming the book as an autobiography, it can be described as a Bildungs Romans, (where the reader witnesses the main character grow into adulthood) in first person narrative.

In Epihina, the book’s prologue, Sanaa, the main character meets a brother on her father’s side, for the first time. She also meets up with a sister whom for most of her life she never knew, but met prior to meeting this brother. Following the pre sentence Epiphany, Sanaa uses the flashback method to tell her story.

In the first chapter, titled Simple and Unspoilt, we meet Sanaa and her older brother Gary, who live with their mom in Kingston, who despite not being well-off, is always welcoming, and whose home throughout the books can be described as a safe home for close and distant relatives, even non-relatives. The family is visited by the children’s father, a businessman who lives in Montego Bay. The visits however become less, as the times of scarcity during the late 70s in Jamaica, grow more unbearable, with small businesses closing and an increase in outward migration.

A fourteen-year-old Sanaa decides to relate the family’s hardship to her father via a letter. Although both often communicate through this method, the father does not take the letter kindly. As Sanaa sees it, the letter is her father’s reason for his apparent ‘disowning’ of her – an act she reciprocates, as he becomes dead to her from then. This moment, in 1978 is an important milestone in Sanaa’s life, as she embarks on a fatherless existence, throughout high school and college, until a reunion of sorts, following college graduation.

During the periods when, as the author puts it, ’subliminal longing for love, forgiveness and approval would prevail’, Sanaa would write poems.

Here it is important to note that the author is a graduate of the Sir Arthur Lewis Institute of Social Sciences (SALISES) at the University of the West Indies (UWI), Mona, as A Sip of Cerasee Tea is, in the main, the product of a social scientist who also has an interest in literature.

There are moments when the social commentary is not as intertwined in the story as it could be, especially since successful examples of this exist. Marlon James’ Book of Night Women, for example, brilliantly fuses the historical time of Jamaican plantation slavery, whilst telling the fictional story of Lilith, born with an independent mind, but born into slavery. He does this also in A Brief History of Seven Killings, placing the book partially in the same period of Williams’ book, therefore covering some of the same iconic moments such as the One Love Peace concert for example.

The books compelling parts are therefore those entered on the personal struggles and epiphanies of Sanaa. For example when Jay, the more ideal candidate for Sanaa’s affection dies, we mourn. When Sanna hobbles through certain life experiences without a father’s advice or watching eyes, we go back to the moment on her verandah when her dad’ disowned’ her, perhaps we vilify him, but we certainly know where it began.

As you read A Sip of Cerasee Tea, you realize that there are two physical losses in Sanaa’s life, the father who disappeared and Jay, the man who proposed to her, whilst battling a terminal illness. Sadly he succumbed to that illness. There is also another loss, a spiritual loss. Jay, the would be husband and a Christian, came into Sanaa’s life during her time of being closer to God, but Brad, the one she spent most of her adult life with, was, in essence, the apple Eve at of, in the Eden.

There is much in A Sip of Cerasee Tea that the Jamaican reader can relate to. Apart from the depiction of Jamaica from the late 70s to at least the 2010 Tivoli incursion, there’s the male/female interaction involving visiting families, half brothers and sisters, long-lost, or newly discovered siblings, which, interestingly, often happens after the death of a parent. Perhaps we should name that phenomenon, the ‘hidden sibling syndrome’.

In hindsight, one of the strengths of Williams’ book is that it puts this Jamaican phenomenon of ‘distant parenting’ and separated families in the forefront and tells us that this is one of our weaknesses, causing bruised and weakened persons. The beauty about this lesson that the book teaches is that it was never directly said, but shines through the story.

Although below is a serious depiction of the state of mind and behaviour of many Jamaican fathers, it is one of the funnier moments in the book. It follows after Sanaa establishes how strictly her father ran one of his households, despite his lack of constant presence. The rule was that there were to be no boys in the house, or even at the gate – a rule, I suspect more than a few Jamaican households have lived by.

One afternoon, one barefaced young man from the neighbourhood decided that the unwritten’ do not enter’ rule was no longer applicable to him.

He pushed the gate, moving in towards the house, even though he saw our father’s car parked in the driveway!

Ou father was in the shower and had apparently spied the gate crasher approaching from his vantage point of the bathroom window. As the youngster drew closer and before Simone could caution him, our father came bounding out onto the verandah, a towel tightly draped around his hips, licensed firearm swinging in the direction of the intruder, shouting,

If we assume that Sanaa is Sandra E. Williams, then A (cleansing) Sip of Cerasee Tea – the book – seems exactly what the author needed for the healing journey she seems to be on.

A Sip of Cerasee Tea: Taking the Boldest Steps

- Ann-Margaret Lim is a poet and author, her collection of poetry, Kingston Buttercup was amongst the Bocas Prize 2017 poetry short-list. Her books are available at Bookophilia, amazon.com and peepaltreepress.com. Email her at: annyinpin@hotmail.com