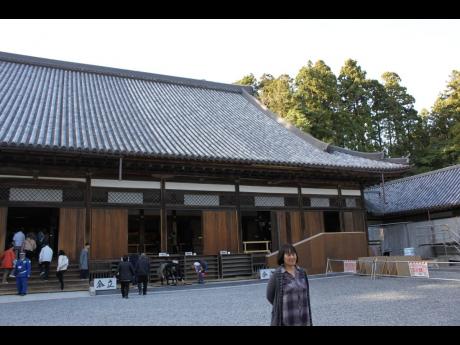 The land of the rising sun has distinct nuances that permeate the air and meet the eye – humility, meticulousness, precision, and spirituality - each intertwined by threads of unequivocal faith, woven by the invisible hands of the Supreme Being.

Godaido, an icon of the city of Matsushima, in north Japan, sits on a small island off the coast. This area is one of the country’s most scenic spots and is also famous for the cultivation of oysters.

There is something magnetic about Godaido temple, which attracts scores of visitors, who cross a wooden bridge that connects the island where Godaido stands with the mainland.

Walking on this bright-red painted bridge, which is a simple structure – spaced wooden boards attached horizontally to the two railings and over them two long long vertical planks, over which the visitors walk to and fro from the temple. One can see the sea splashing on to the rocky edifice.

The intentionally precarious red bridges connecting the island to the shore are known as sukashibashi. The gaps between the boards are deliberate, existing to compel worshippers’ concentration as they cross.

The wooden building has distinctive architecture - an arched roof, a latticework façade. The work is intricate yet simple and minimalist, incorporating inherent Japanese characteristics.

The present building, which was built by local ruler Date (pronounced Da –Tay) Masamune in 1604, has aged over the centuries, its surface bearing the distinct hues etched by Mother Nature – saline water, sunshine, rain, and snow.

Visitors make a beeline to the shrine, their steps crackling on the gravel surface as the waves splash on to the island’s rocky surface and the sounds of the seagulls in the distance permeate the air.

The sanctum sanctorum is home to five Nyorai statues (derived from Sanskrit, ancient language of India, and used in reference to Buddha, the enlightened and the omnipresent one), installed in 828 AD.

These statues are open for public viewing once in 33 years, the last time in 2006.

Devotees light incense sticks, fold their hands and say their solemn prayers before bowing and placing the incense sticks on a wooden container before taking a walk around the temple, which is small carvings of the twelve animals of the zodiac.

Godaido is a living example of the influence of Buddhism in Japanese culture and society. Nothing ostentatious, devoid of any flamboyant rituals, the recognition of the divine forces of the universe is in the fabric of life and being in Japan. Through this harmony, the country has withstood natural calamities that have struck, with Zen as their saviour and guiding light. (Zen is a derivative from ancient India Dhyan, which means deep in meditation, complete concentration and synergies of one’s positive energies).

March 11, 2011, is etched in living memory. On this day, the world sat transfixed by video feed as a devastating tsunami, which engulfed the region, hit.

In Matsushima, nature’s fury was minimal, locals attributing it to the divine presence and intervention that looked upon the people that saved them from the catastrophic waves.

“It is the power of Jizo (the Buddhist deity, who is protector of the vulnerable, especially children, travellers, and expectant mothers) and the god of Shiyogama that saved us,” Yuasa Tsunoda, a tour guide, said.

Godaido was unscathed. The power of Zen, the serenity it exudes, perhaps, calmed the fury of the tsunami waves that stopped at the gate of Zuigan-ji temple, which is a walking distance away.

A mystery of the unexplained for many, perhaps, but the presence of the forces of divinity reaffirmed the faith of the people of Matsushima and God’s abundant blessings.

As one walks away from this shrine, one is blessed by the calm, soothing, serene energies, feelings that are hard to explain, but they resonate in one’s mind, body, and spirit.