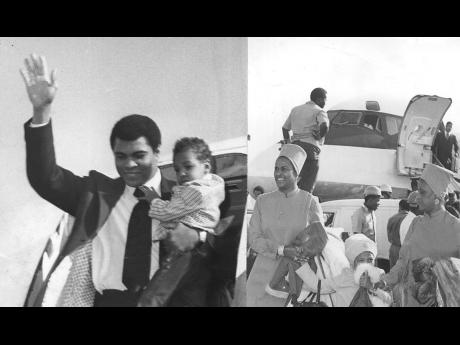 File
1974: World heavy weight boxing champion Muhammad Ali (left) alights with his son from the Air Jamaica aircraft which took them from Chicago to the Norman Manley International Airport in Kingston on December 28 for a four-day stay in Jamaica. At left (immediately to the right of baby Ali) is the champion’s wife Belinda seen holding their daughter Maryum. 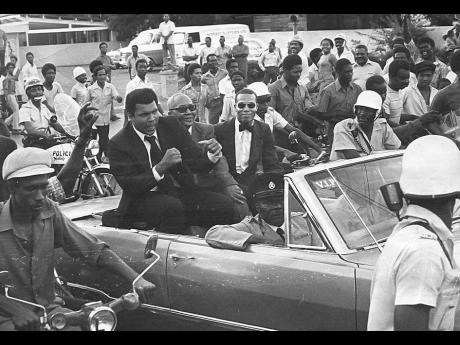 File
Muhammad Ali (left) responds to a request from hero-worshipping onlookers to “show us your fists”, during the 22-car motorcade from the Norman Manley International Airport on December 28, to The Jamaica Pegasus hotel shortly after the champion and his party arrived from Chicago for their four-day stay in Jamaica. Immediately beside Ali in the back is Minister Jam Muhammad, brother of the Messenger of Allah Elijah Muhammad of the Black Muslim Faith in the USA. While at right is Minister Louis Farrakhan. 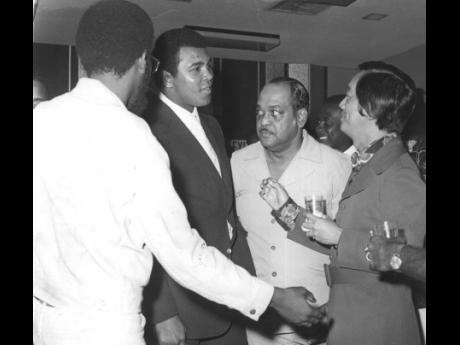 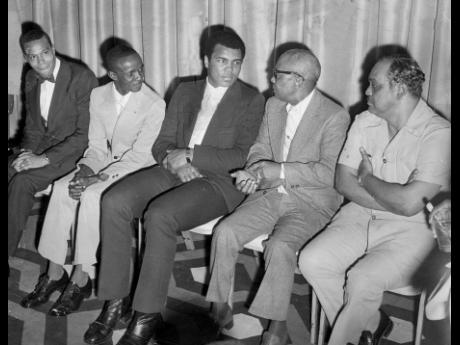 File
Muhammad Ali (centre) listens intently to Muslim Minister Jam Muhammad (in glasses) in the lobby of The Jamaica Pegasus hotel shortly before the start of reception for him on December 28, 1974. Others in picture from left are Louis Farrakhan, another Muslim minister who accompanied Ali. 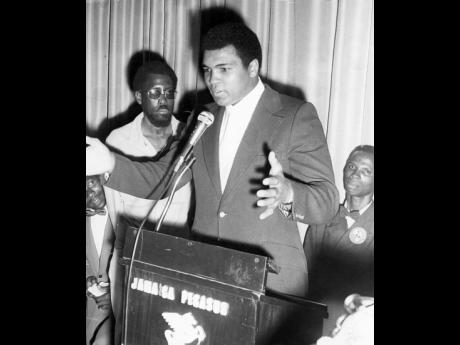 File
Muhammad Ali speaking at the reception at the Jamaica Pegasus Hotel. 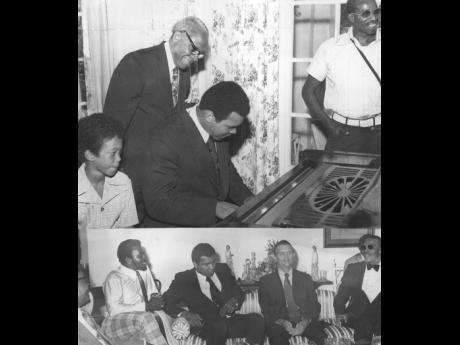 File
JIVING AT TOP AND PENSIVE BELOW: Muhammad Ali tickles the ivories (above) at King’s House on December 30, as his host, Governor General Sir Florizel Glasspole (behind him), smilingly approves the choice and the beat of the music, while Roger, son of the Governor General’s Secretary, Neville ‘Fifi’ Smith seems engrossed in sounds coming from the Baby Grand. Below: Ali (third from left) is pensive and very serious as Opposition Leader, Edward Seaga, (second from right) makes a point during the reception he and Mrs. Seaga gave for the champion’s Muslim Party at Temple Meads. Minister Louis Farrakhan is smiling at extreme right, while Senator Pearnel Charles (second from left) and Muslim Minister Jam Muhammad (extreme left) listen intently. 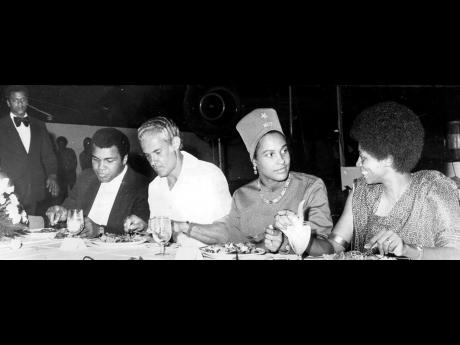 File
THE CLIMAX: The climax of the enthusiastic and hero-worshipping, historic visit of Muhammad Ali to Jamaica was the dinner given by the Prime Minister, Michael Manley, at Jamaica House on December 29. The Prime Minister hailed Ali as the superb athlete and a man of conscience who, in transcending the mountain didn’t forget his people. Ali in turn said both are champions in their own rights - Mr. Manley as the greatest leader of a country who was so humble. They are seen with their respective wives, Belinda (second right) and Beverley at the head table. 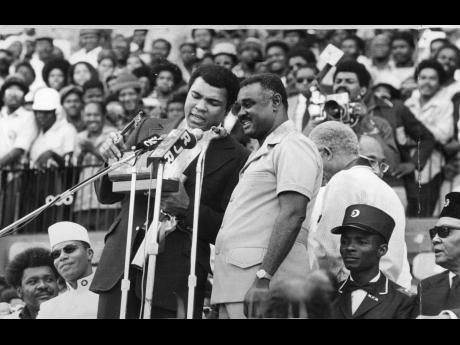 File
World heavyweight boxing champion Muhammad Ali (left) saying thanks as he holds the Key to the City of Kingston. The Key symbolizes freedom of the city and was presented to him on December 29 by the Mayor of Kingston, Councillor Ralph Brown, at the grand rally at the National Stadium. 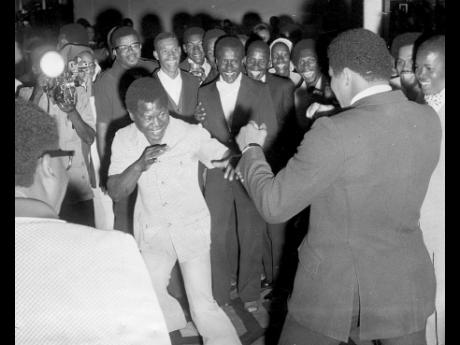 File
Bunny Grant (left) is all smiles as he spars with Muhammad Ali at the reception given by National Sports Limited at the Jamaica Pegasus Hotel on December 28.
1
2
3
4
5
6
7
8
9

As 2020 winds down, we take a walk down the lanes of history. World heavyweight boxing champion Muhammad Ali visited Jamaica in December 1974 at the invitation of Prime Minister Michael Manley. His four-day visit was considered to be a spectacular affair.

He was presented with the symbolic key to the City of Kingston by Mayor Ralph Brown at a mass rally attended by more than 20,000 people at the National Stadium on December 29.

In acknowledging the honour conferred on him, the “People’s Champion”, as he is commonly called, Ali said: “With you all behind me there is not a man in the world that can whip me.”

Ali expressed his desire to buy a home in Jamaica.

Manley described Ali as “a symbol of courage – a man who has climbed the mountaintop and stretched out a helping hand to suffering people of this earth”. Ali was also given a reception by Manley at Jamaica House. He also paid a courtesy call to Governor General Sir Florizel Glasspole at King’s House.

We showcase some images of his visit to the island.