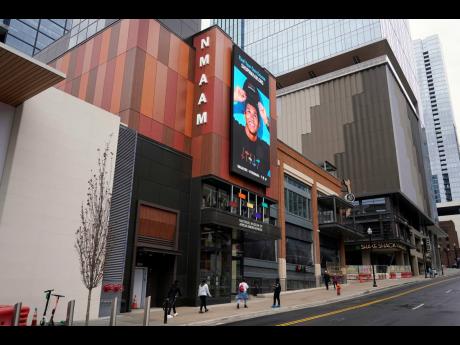 AP
People walk to the entrance of the National Museum of African American Music, in Nashville, Tenn. Unlike other museums that focus on a genre or label, this new museum is the first to span multiple genres including gospel, blues, jazz, R&B and hip hop. 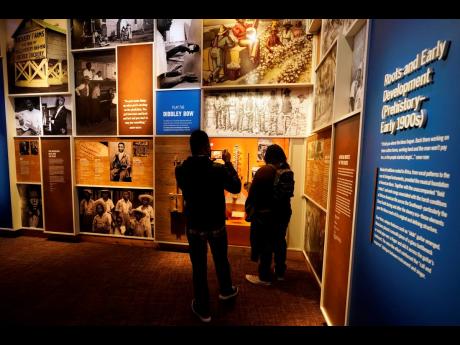 AP
People look at an exhibit in the National Museum of African American Music. 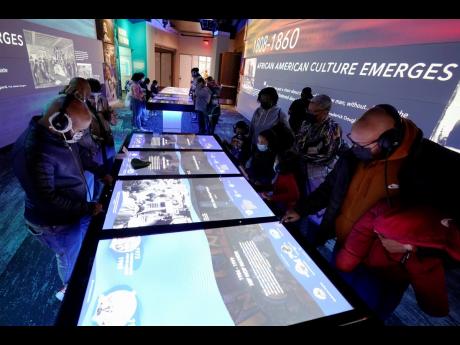 AP
People look at an interactive exhibit in the National Museum of African American Music. 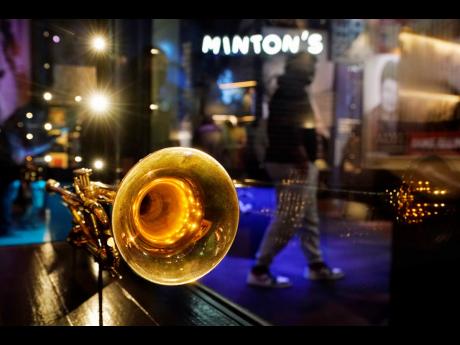 AP
A trumpet belonging to Louis Armstrong is displayed at the National Museum of African American Music. The museum has 1,600 artifacts in the collection, which also includes clothes and a Grammy Award belonging to Ella Fitzgerald, and a guitar owned by B.B. King. But to make the best use out of the space, the exhibits are layered with interactive features, including 25 stations that allow visitors to virtually explore the music. 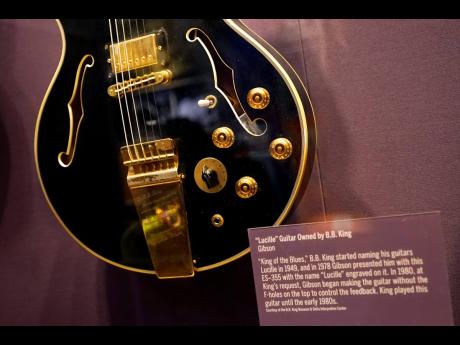 AP
Lucille, a guitar owned by blues legend B.B. King, is displayed at the National Museum of African American Music. 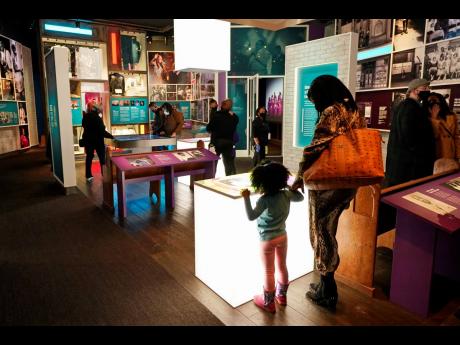 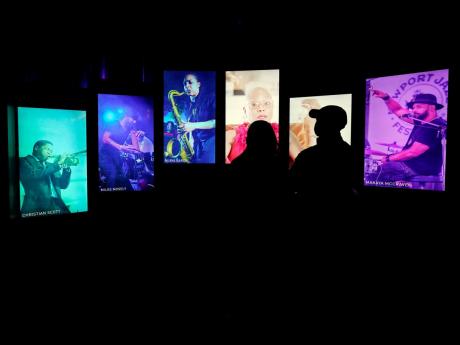 AP
Visitors watch an exhibit at the National Museum of African American Music. 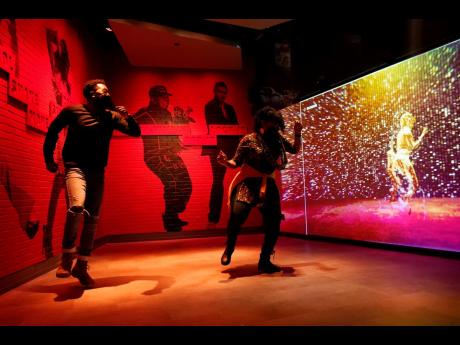 AP
Armond Carter (left) of Atlanta and his mother, Latonya Carter, dance together in an exhibit at the National Museum of African American Music.
1
2
3
4
5
6
7
8

A new museum two decades in the making is telling the inter-connected story of black musical genres through the lens of American history.

The National Museum of African American Music, which opened with a virtual ribbon-cutting on Martin Luther King Jr Day, is seated in the heart of Nashville’s musical tourism district, alongside honky-tonks and the famed Ryman Auditorium, and blocks from the Country Music Hall of Fame and Museum.

Even as Nashville has long celebrated its role in the history of music, the new museum fills a gap by telling an important and often overlooked story about the roots of American popular music, including gospel, blues, jazz, R&B, and hip-hop.

“When we think of the history of African American music and the important part it has played in our country, it was long overdue to honour it in this type of way,” said gospel great CeCe Winans, who serves as a national chair for the museum.

The idea for the museum came from two Nashville business and civic leaders, Francis Guess and T.B. Boyd, back in 1998, who wanted a museum dedicated to Black arts and culture. And while there are museums around the country that focus on certain aspects of Black music, this museum bills itself as the first of its kind to be all encompassing.

“Most music museums deal with a label, a genre, or an artist,” said H. Beecher Hicks III, the museum’s president and CEO. “So it’s one thing to say that I’m a hip hop fan or I’m a blues fan, but why? What was going on in our country and our lived experience and our political environment that made that music so moving, so inspirational, such the soundtrack for that part of our lives?”

The museum tells a chronological story of Black music, starting in the 1600s through present day and framed around major cultural movements, including the music and instruments brought by African slaves, the emergence of blues through the Great Migration, the Harlem Renaissance, and the civil rights movement.

When Winans recently took a tour of the museum, she saw her own family of gospel singers, The Winans, represented in the museum’s exhibit on spiritual music alongside the artists that influenced her own musical career.

“You never start out doing what you’re doing to be a part of history or even be a part of a museum,” said the 12-time Grammy-winning singer.

She noted that the museum put gospel music in context with how it inspired social change, especially during the civil rights era.

“When you look at all the different movements that have happened down through the years, and Martin Luther King Jr, it was always with the church behind them,” said Winans. “It was the gospel music that inspired us to love one another, to build bridges.”

The museum has 1,600 artefacts in their collection, including clothes and a Grammy Award belonging to Ella Fitzgerald, a guitar owned by B.B. King, and a trumpet played by Louis Armstrong. To make the best use out of the space, the exhibits are layered with interactive features, including 25 stations that allow visitors to virtually explore the music.

Visitors can learn choreographed dance moves with a virtual instructor, sing Oh Happy Day with a choir led by gospel legend Bobby Jones, and make their own hip-hop beats. Visitors can take home their recordings to share via a personal RFID wristband.

There will be a changing exhibit gallery, with the first topic to be the Fisk Jubilee Singers, an a cappella group originally formed in 1871 to raise money for Fisk University. The group sang slave spirituals at their concerts. The tradition continues today.

After a year of racial reckoning through the movement of Black Lives Matter, Hicks said that the timing couldn’t be more perfect to highlight the contributions of Black music to our shared American experience.

“[It] is not an accident that we are able to finish and get the museum open in this moment, in this moment where we need to be reminded, perhaps more than others or more than in the recent past, that we are brothers and we share more together than we do our differences,” said Hicks.