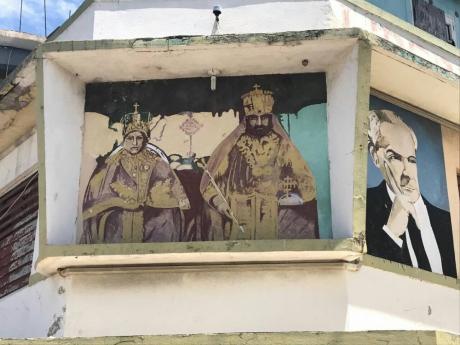 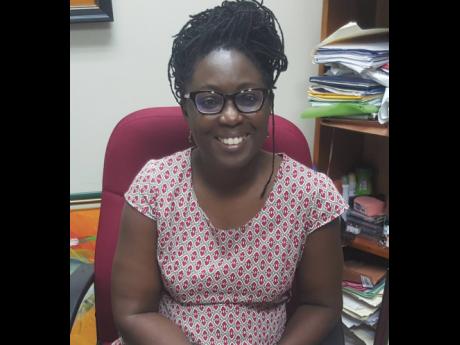 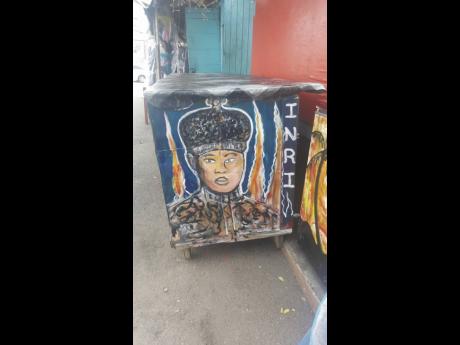 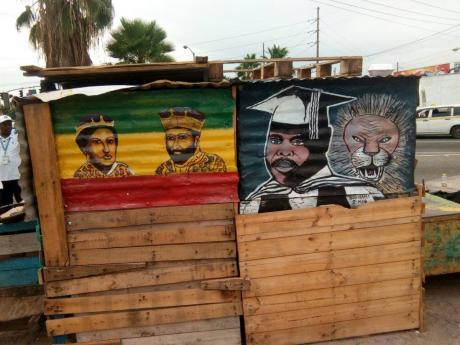 Photo by Maurice Graham
Emperor and Empress with Marcus and the Lion on a roadside stall at Portia Simpson Miller Square. 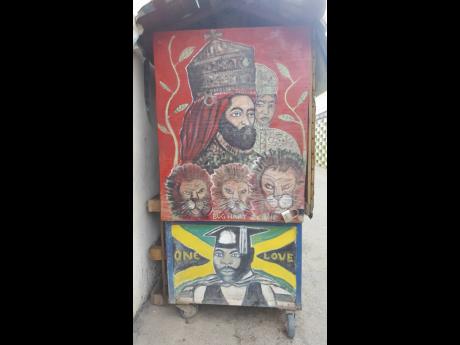 Recently, I surveyed religious street art and graffiti in Kingston, Jamaica. I saw numerous Rastafari-related images, such as His Imperial Majesty (HIM), the Lion of Judah and the Rasta Ites, on wall, carts, stalls, shops, fences, and buses. One unexpected but recurring representation of Rastafari that I found was of the divine duo: King Alpha and Queen Omega/Emperor Haile Selassie I and Her Royal Highness (HRH) Empress Menen Asfaw. Alpha and Omega, the first and last letters of the Greek alphabet (ΑΩ), are titles claimed by Jesus in the Book of Revelation 1.8, 1.17, 21.6, 22.13. Together both letters represent the idea of fullness, completion. For example, Revelation 1.8 states, “I am the Alpha and the Omega,” says the Lord God, “the one who is and who was and who is to come, the almighty is the beginning and the end”. In the eyes of Rastafari, these verses refer to HIM.

The drawings of the royal couple capture their likeness as seen in widely available photographs in the public domain, especially of their coronation on November 2, 1930. Their identity in the street drawings are, therefore, unquestionable. Images of the emperor are especially popular and easily recognisable with his distinctive features and prominent beard. Indeed, Selassie continues to have iconic status and is recognised across the globe. Queen Menen is less known but revered among women of the Rastafari faith. Her presence alongside the emperor in the drawings serves to identify her even when an artist may find it necessary to write the word “Empress”.

From time to time, the couple were also accompanied by renown Jamaicans like national hero Marcus Mosiah Garvey and reggae icon Bob Marley. At other times, they are joined by the Lion of Judah alone or alongside the other worthies. They are always resplendent in regal robes and often, elaborate crowns and headdresses. The emperor on his own appears in various guises such as in his military garb. However, he is always in full regalia when he accompanies the queen.

These portraits of the king and queen together represent the Godhead in which both male and female principles are present, as Leonard Howell, the first person to preach the divinity of Selassie, notes in The Promised Key, a foundational Rastafari text. Recognition and acceptance of the presence of the feminine in the fullness of the Rastafari Godhead has developed overtime and so is not often acknowledged, especially as Jah has been given such a central and pre-eminent role as God incarnate, the Black Messiah. The fullness of the Godhead is present in King Alpha himself, for he is both Alpha and Omega and earth’s rightful ruler. The empress’s divinity is derived from the emperor, so on her own, she would not represent the fullness. Of course, this interpretation of the role and presence of the female in the Rastafari Godhead would not be accepted by all Rastafari, who hold varying beliefs in this regard.

In the art seen across town, Queen Omega, therefore, rarely appears on her own but is usually with the emperor. One notable exception to this is HRH En-flamed, on a roadside stall at Friendship Lane, Cross Roads. Interestingly, that image, which shows the empress in an ornate robe and crown, is accompanied by the letters INRI, which, according to the Gospel of John 19.19, is translated “Jesus of Nazareth, King of the Jews” (Iesus Nazarenus Rex Iudaeorum), identifying the charge which led to Jesus’ crucifixion. For the Rastafari, this means “I, Negus Rule Israel” and speaks to the emperor’s status as king (Negus in Amharic) and “King of Kings” (Negus Negusti in Amharic). Selassie’s full title was “His Imperial Majesty Haile Selassie I, Conquering Lion of the Tribe of Judah, King of Kings and Elect of God”. By including those letters (INRI) alongside the portrait of the emperor, the artist may be suggesting that the emperor is present and so the fullness of the Godhead is there also.

Of course, representing this divine totality (beginning and end) as male and female does not necessarily translate into full respect for women in a livity which is often critiqued for its patriarchy and subordination of women (no more than belief in the resurrection of the body in Christianity engenders true respect for the body). Nonetheless, in such depictions of divinity in both its dimensions, Rasta critiques the traditional churches since their Trinitarian Godhead is wholly male. This representation of the female principle in the Black Godhead does call into question the relationship between Black men and women. What does a female principle represent for the lives of women struggling with the challenges of urban life?

And [Prince Charming] left {Sleeping’s Beauty] to be a woman alone, and that is why black people have to wait another four hundred years before King Alpha and Queen Omega will appear to settle them in their kingdom in the promised land. For Sleeping’s beauty is still only half awake, drugged in its woman’s pain, and she cannot properly put body and soul together, for that needs the help of Charming.

In her story, Brodber speaks of the rift existing between Black men and women and expresses the hope for the coming of a divine duo, King Alpha and Queen Omega. She presents the brokenness of the male-female relationship as resulting from the ravages of enslavement; the Black man is unable to bear the pains associated with being Black and female. The reality of life and love based in complementarity has been sundered. The royal couple are the ideal of equality and harmony as their equal coronation and life together demonstrate after whom Black men and women aspire, but more so, they are saviours who will rescue Black Jamaicans from this drugged, drunken, broken state. Selah!

*All titles given by the author