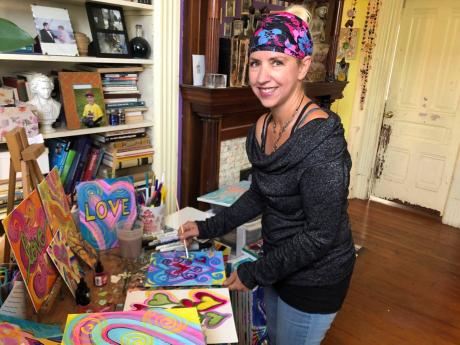 AP
Artist Deirdre Freeman poses in her studio in Alameda, California. Freeman, who has hung over 120 pieces of artwork on telephone poles to spread joy to others, says, “It’s starting a love and kindness movement, which is what we need.” 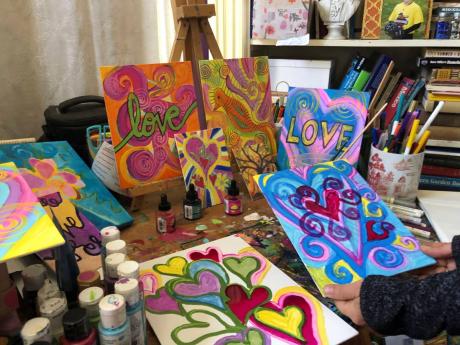 AP
Artwork made by Deirdre Freeman is seen in her studio in Alameda, California. 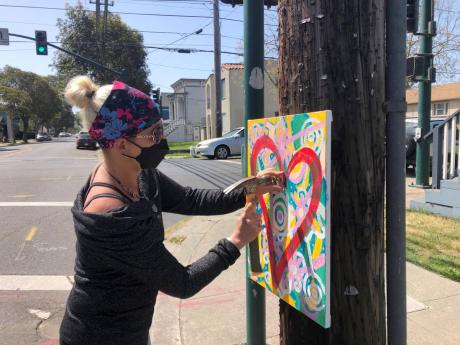 Deirdre Freeman walks the mile from her home, lugging a large, colourful painting and tote bag with her hammer and nails. Her destination is a telephone pole at a busy intersection, where she will hang her largest “heartwork” painting yet.

Her goal is simple: to spread smiles and some much-needed love to the masses through this 18-by-24-inch acrylic on canvas, which features a red heart shape over whimsical designs – typical of the paintings she has been sharing in public places.

“Hopefully, it stays here for a little while,” she says, hammering away as traffic bustles by. “Sometimes cars will beep and wave when they see me doing it.”

She is recognised around town, too. “Oh, you’re the heart lady,” people tell her.

This project began two years ago with Freeman cutting out small paper heart prints of her work, writing messages on the backs, pinning them to trees around town and sending them all over the world. Some 6,500 hearts made it to places like Italy, France, Portugal, and Japan.

“It was really a labour of love,” she says.

Now, she paints larger pieces. Freeman has hung more than 120 heartworks, each of them taking between an hour and four hours to finish. She dreams of having her art on billboards.

A speech pathologist who stepped away from her profession 12 years ago to raise her two children, Freeman always wanted to be an artist, but the timing wasn’t right until more recently.

At age 50, she is overjoyed to make a difference in someone’s day, week, or month; to put a smile on a face; or simply provide a sweet distraction from the challenges of everyday life, especially during the pandemic. One man told her he was suicidal when he encountered a heartwork that pulled him from that debilitating, dark space. A mom shared how her young son saw Freeman’s paintings on poles and how the love they projected made him feel safe in his community.

She never asked formal permission from the city of Alameda to do this project — but nobody has objected or stopped her yet. She posts heartworks-in-progress on her Facebook page with a simple message: “for the poles.”

“Sometimes I hide them in little surprise places,” she says. Occasionally, she shares a photo clue on social media to see who might find one first in this close-knit East Bay suburb of San Francisco.

Some have been defaced, have deteriorated, or been destroyed by exposure to the elements. Freeman just patches them up when possible or replaces a painting with another.

She has work that stayed put on a pole for more than a year and a half while other paintings have disappeared in just a few days. Some are taken. In fact, she saw one painting on a porch in her neighbourhood. She accepts that, realising her work has likely resonated with someone in a meaningful way.

“No, no, no, love will overcome,” she says, because “love is a magnet. A lot of magic can happen just from this one little project that I’m doing. It’s inspiring some others, and it makes me so happy.”

One piece at the end of her street now has a friend, too. A child added a painting that hangs beneath one of hers, with the message, “Be awesome.”

“My happiest part of this is there are children and others who are starting to put things up,” Freeman says. “It’s starting a love and kindness movement, which is what we need.”