Fossil leaves may reveal climate in last era of dinosaurs 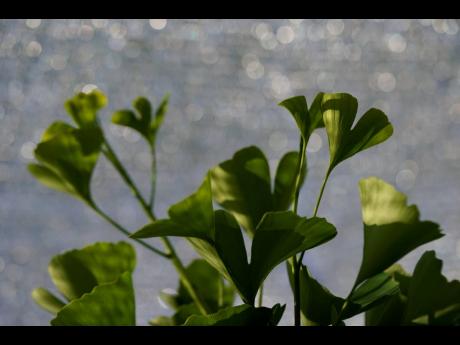 AP
Distinctive fan-shaped ginkgo leaves are seen in the Fossils Atmospheres Project at the Smithsonian Research Center in Edgewater, Maryland. The Smithsonian is using the ginkgo to study climate change. 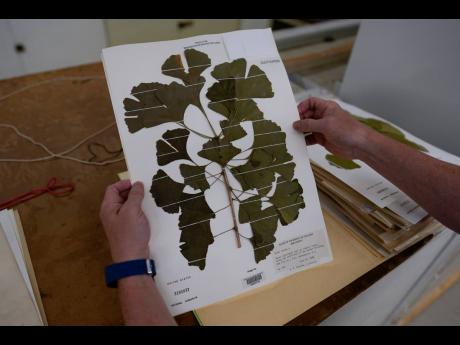 AP
Rich Barclay, Smithsonian research geologist and Director of the Fossil Atmospheres Project, holds a display of ginkgo leaves taken from a tree in S.W. Washington D.C., in 1988. 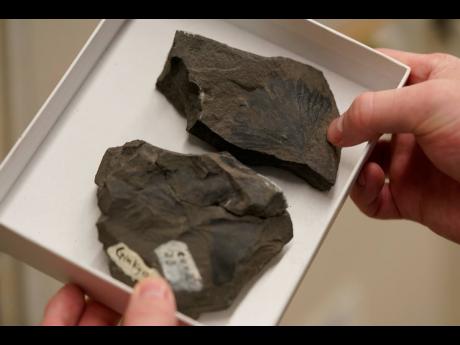 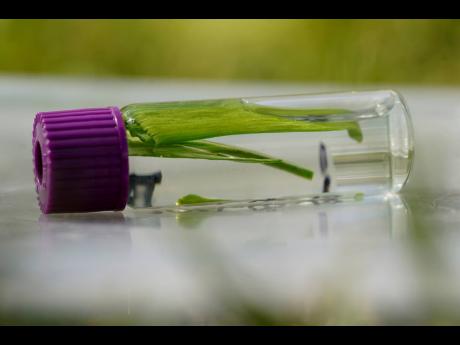 AP
Slivers of a ginkgo tree leaf is put into a test tube for the Fossils Atmospheres Project at the Smithsonian Research Center. 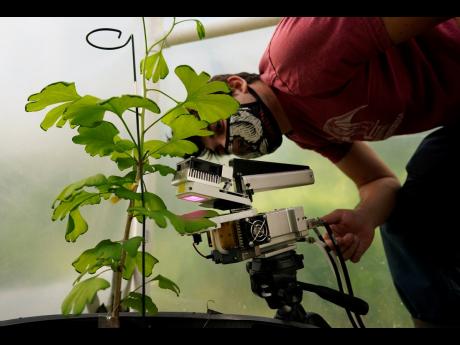 AP
Ben Lloyd, director of experimental operations, uses a machine to examine the exchange of gases between ginkgo leaves and their environment inside a chamber at the Fossils Atmospheres Project at the Smithsonian Research Center. 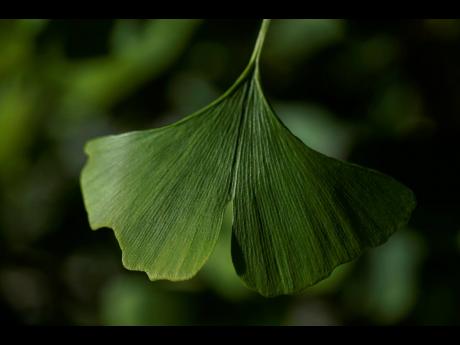 AP
A distinctive fan-shaped ginkgo leaf in the Fossils Atmospheres Project is seen in the morning sun at the Smithsonian Research Center in Edgewater, Md., Tuesday, May 18, 2021. “Ginkgo is a pretty unique time capsule,” said Peter Crane, a Yale University palaeobotanist. “It is hard to imagine that these trees, now towering above cars and commuters, grew up with the dinosaurs and have come down to us almost unchanged for 200 million years.” 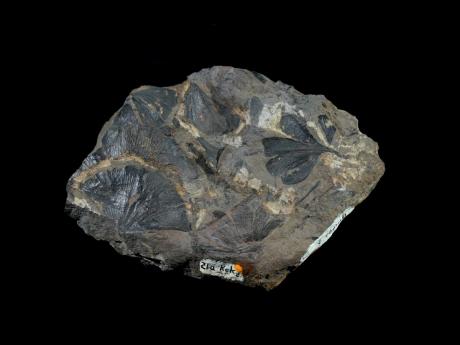 AP
A Late Cretaceous ginkgo leaf fossils from Alaska’s North Slope is seen at the National Museum of Natural History in Washington.
1
2
3
4
5
6
7

Richard Barclay opens a metal drawer in archives of the Smithsonian Natural History Museum containing fossils that are nearly 100 million years old. Despite their age, these rocks aren’t fragile. The geologist and botanist handles them with casual ease, placing one in his palm for closer examination.

Embedded in the ancient rock is a triangular leaf with rounded upper lobes. This leaf fell off a tree around the time that T-rex and triceratops roamed prehistoric forests, but the plant is instantly recognisable. “You can tell this is ginkgo. It’s a unique shape,” said Barclay. “It hasn’t changed much in many millions of years.”

What is also special about ginkgo trees is that their fossils often preserve actual plant material, not simply a leaf’s impression. And that thin sheet of organic matter may be key to understanding the ancient climate system – and the possible future of our warming planet.

But Barclay and his team first need to crack the plant’s code to read information contained in the ancient leaf.

“Ginkgo is a pretty unique time capsule,” said Peter Crane, a Yale University palaeobotanist. As he wrote in “Ginkgo,” his book on the plant, “It is hard to imagine that these trees, now towering above cars and commuters, grew up with the dinosaurs and have come down to us almost unchanged for 200 million years.”

If a tree fell in an ancient forest, what can it tell scientists today?

“The reason scientists look back in the past is to understand what ios coming in the future,” said Kevin Anchukaitis, a climate researcher at the University of Arizona. “We want to understand how the planet has responded in the past to large-scale changes in climate – how ecosystems changed, how ocean chemistry and sea levels changed, how forests worked.”

Of particular interest to scientists are “ hothouse “ periods when they believe carbon levels and temperatures were significantly higher than today. One such time occurred during the late Cretaceous period (66 million to 100 million years ago), the last era of the dinosaurs before a meteor slammed into Earth and most species went extinct.

But climate information about the distant past is limited. Air bubbles trapped in ancient ice cores allow scientists to study ancient carbon dioxide levels, but those only go back about 800,000 years.

That is where the Smithsonian’s collection of ginkgo leaves comes in. Down a warren of corridors, Barclay hops across millennia – as is only possible in a museum – to the 19th century, when the Industrial Revolution had started changing the climate.

From a cabinet, he withdraws sheets of paper where Victorian-era scientists taped and tied ginkgo leaves plucked from botanical gardens of their time. Many specimens have labels written in beautiful cursive, including one dated August 22, 1896.

The leaf shape is virtually identical to the fossil from around 100 million years ago and to a modern leaf Barclay holds in his hand. But one key difference can be viewed with a microscope: how the leaf has responded to changing carbon in the air.

Tiny pores on a leaf’s underside are arranged to take in carbon dioxide and respire water, allowing the plant to transform sunlight into energy. When there is a lot of carbon in the air, the plant needs fewer pores to absorb the carbon it needs. When carbon levels drop, the leaves produce more pores to compensate.

Today, scientists know that the global average level of carbon dioxide in the atmosphere is about 410 parts per million – and Barclay knows what that makes the leaf look like. Thanks to the Victorian botanical sheets, he knows what ginkgo leaves looked like before humans had significantly transformed the planet’s atmosphere.

Now he wants to know what pores in the fossilised ginkgo leaves can tell him about the atmosphere 100 million years ago.

But first he needs a codebreaker, a translation sheet – sort of a Rosetta stone to decipher the handwriting of the ancient atmosphere.

That is why he is running an experiment in a forest clearing in Maryland.

One morning earlier this year, Barclay and project assistant Ben Lloyd tended rows of ginkgo trees within open-topped enclosures of plastic sheeting that expose them to rain, sunlight, and changing seasons. “We are growing them this way so the plants experience natural cycles,” Barclay said.

The researchers adjust the carbon dioxide pumped into each chamber, and an electronic monitor outside flashes the levels every five seconds.

Some trees are growing at current carbon dioxide levels. Others are growing at significantly elevated levels, approximating levels in the distant past or, perhaps, the future.

“We’re looking for analogues – we need something to compare with,” said Barclay. If there is a match between what the leaves in the experiment look like and what the fossil leaves look like, that will give researchers a rough guide to the ancient atmosphere.

They also are studying what happens when trees grow in supercharged environments, and they found that more carbon dioxide makes them grow faster.

But adds Barclay: “If plants grow very quickly, they are more likely to make mistakes and be more susceptible to damage. ... It’s like a race car driver that’s more likely to go off the rails at high speeds.”