New Caribbean writing anyone? Then PREE this 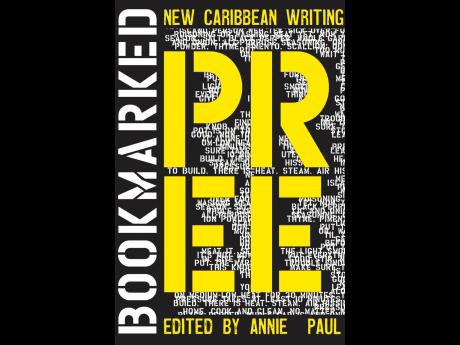 What makes one want to pick up a book? For some, it’s a catchy title and distinctive cover design. For others, an author’s name trumps every other factor. ‘Bookmarked: New Caribbean Writing’, edited by Annie Paul, has all of the above. For anyone engaged with the Caribbean literary scene and familiar with PREE (https://preelit.com/) — the digital magazine of writing started in 2018 by noted writers Annie Paul, Isis Semaj-Hall and Diana McCaulay — Bookmarked, PREE’s first print anthology, would be irresistible, especially with contributors such as Ingrid Persaud, Leone Ross, Kei Miller, and Ishion Hutchinson.

Bookmarked’s visionary curation of fiction, non-fiction, poetry and art will excite your senses, challenge your assumptions, interrogate long-held beliefs, entertain, dazzle, and expand past, present, and future visions not only of the region, or any particular country, but of yourself. To the already evangelised: You done know. Drop the coin (or tek time save) and support the first book from the new local publisher, PREE ink.

What exactly is PREE? The simple answer is that it is a free (open access) online magazine launched in April 2018 to increase the visibility of Caribbean writing. In back-cover blurbs, Kei Miller calls PREE “the literary platform the Caribbean didn’t realise it was in desperate need of” while Marlon James says “PREE is our most vital argument that art is worth fighting for, and fighting over.” As co-founder and the editor who had the honour of naming the platform, Isis Semaj-Hall’s essay, ‘A Brief History of the Word ‘Pree’, provides further insight into the etymology and use of this vernacular term.

PREE’s openness to all the ways we exist and create, including local inflections often dismissed as “incorrect”, is a wonderful aspect of the magazine’s curatorial ethos in which a Twitter thread by Javed Jaghai is placed alongside more traditional forms of writing. As literary critic Shalini Puri says in her foreword, “A literary language that can hold Caribbean reality today must take stock of how digital culture mediates everyday life … PREE explores in literature the ways that patwa and hashtag, literature and visual art, are folded together and the new expressive possibilities that arise out of that contact. It celebrates the mutual shaping of literary and digital culture.”

Bookmarked features selected writings and art from PREE’s first five issues. In ‘Is Joke You Joking?’, Kris Singh closely considers the myriad/different kinds of laughter and how as a processing tool for reframing reality these can both reveal and obscure. Moving from Stuart Hall’s 1991 BBC2 docuseries Redemption Song, to a Lady Saw radio interview, and the novels of Samuel Selvon and Austin Clarke, he asks, “What are laughter’s insights and limits?”

In ‘On Non-Renewable Energy’, K. M. Agard reframes and refracts history by troubling a facile colour story deployed in service of a publicist’s romanticised account of oil development in Trinidad and Tobago with a white Martinican creole’s exhaustive black and white racial taxonomy, as represented in a CXC chemistry textbook’s illustration of the oil distillation process. The remix generates new ways of knowing, of viewing histories and societies, layered on top of previous records, whether from the 18th century or the 21st.

The two stories that lead the ecocide issue, Lise Ragbir’s ‘All That Would Be’ and Sara Bastian’s ‘When We Die’, are speculative fictions in which ecological disasters render the land inhabitable. Rather than the steady, progressive march towards better futures, or even the luxury of stagnation, what will we do when rising sea levels and increasingly more devastating natural disasters definitively destroy the nation states, the islands, that we call home?

Ragbir’s nameless narrator’s denial of her queerness parallels climate change denial — not the aggressive kind but the more passive one in which we are afraid of the future and what a commitment to change would mean. Bastian’s story starts in a present that quickly shifts to a future in which the Bahamas is under the sea. An unnamed, genderless narrator switches between the singular and plural first person, speaking as individual and community to answer, in the main, five questions: “What happens when we die? Do we forget? Do we reincarnate into something else? Were we human to begin with? When we die, why do they forget?” Bahamians adapt by evolving into a kind of merpeople and foreigners adapt by turning the area into a disaster tourism site with scenes that recall how the media behaved towards black New Orleans residents after Hurricane Katrina.

CONVERSE WITH EACH OTHER

Bookmarked stories converse with each other across magazine issues. Roland Watson-Grant’s short story Everybody Live Uptown Now renders glimpses of Kingston after and before a tsunami swallows much of the city. The author is chilling in his subtle defamiliarisation of a dystopian Kingston so near to the present I wasn’t quite sure what I was reading until a child noted that the ocean is visible if one stands on a bench in Emancipation Park.

In similar vein, Diana McCaulay’s essay, ‘Pear Tree Bottom: Land at the Crossroads’, is a lyrical yet grim glimpse of the realpolitik behind the rape of the environment. But whither hope? Can you imagine it between two men in a canefield? Award-winning Topher Allen adds this image to that plot’s history of oppressive violence and continuous exploitative labour “to reveal a new truth”: two men “gasping smoke” together using “ropes, handcuffs, chains, whips”.

In ‘Better Spent: Gender and Energy in the Caribbean’ Marsha Pearce concisely captures how six artists from across the Dutch, Spanish, and English-speaking Caribbean position their work, not within the constant struggle to explain their humanity to various oppressive groups, but beyond it, into new frontiers of self.

“Our writers and artists are among the bold visionaries we need in this “impossible reality in which we are enmeshed”, as Sylvia Wynter observed in her essay ‘Novel and History, Plot and Plantation’. We ignore them at our peril as the pandemic starkly reminds us of what we already knew: the old ways of doing things cannot sustain us. Give Bookmarked a serious pree, return to it again and again. Let new visions bloom.