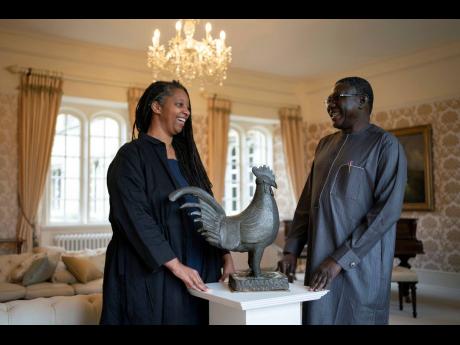 AP
Master of Jesus College Sonita Alleyne, left and Director General of Nigeria’s National Commission for Museums and Monuments Professor Abba Isa Tijani pose for a photo ahead of a ceremony at Jesus College Cambridge, where the looted bronze cockerel, known as the Okukur, will be returned to Nigeria, in Cambridge, England. 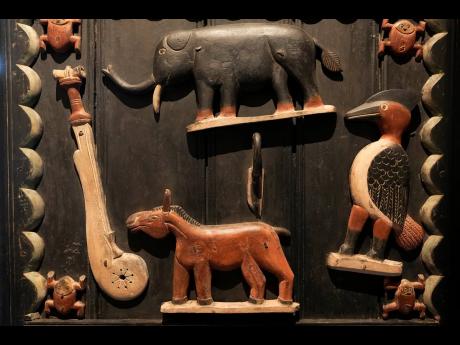 AP
A detail in a the door of King Glele ‘palace, from Benin 19th century, is pictured at the Quai Branly – Jacques Chirac museum, in Paris. In a decision with potential ramifications across European museums, France is displaying 26 looted colonial-era artefacts for one last time before returning them home to Benin. 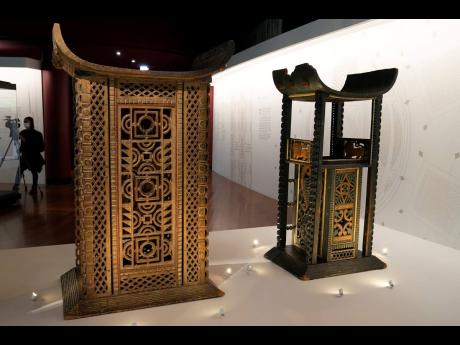 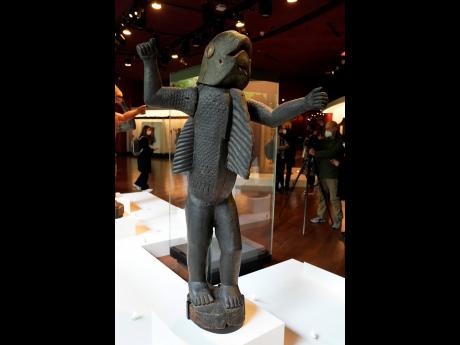 A Cambridge University college handed over a bronze cockerel looted from Africa in the 19th century to Nigerian authorities as part of a modest but growing effort in some European countries to return African art taken by colonial powers.

Jesus College is the first UK institution to give back one of the artefacts known as the Benin Bronzes. Speaking ahead of Wednesday’s ceremony, college master Sonita Alleyne called it a “momentous occasion”.

British colonial forces took the Okukor statue in 1897 from the Court of Benin in what is now Nigeria – among thousands of artworks seized by occupying troops – and it was given to the college in 1905.

The college removed the bronze from public view in 2016 after students protested, saying it represented a colonial narrative. The college set up a working group that concluded that the statue belongs to the Oba of Benin, head of the historic Eweka dynasty of the Benin Empire. The empire centred on Benin City in modern-day Nigeria.

His Royal Majesty, Oba of Benin, Omo N’Oba N’Edo Uku Akpolokpolo, Ewuare II, welcomed the handover decision. “We truly hope that others will expedite the return of our artworks, which in many cases are of religious importance to us,” he said in a statement.

Hundreds of seized Benin Bronzes ended up in the British Museum in London, and hundreds more were sold to other collections such as the Ethnological Museum in Berlin. Germany this year said it would return the items in its possession.

The British Museum said it is working on a collaboration with Nigeria, linked to the construction of a new museum in the West African country, which will allow to “reunite Benin artworks from international collections.” The museum is also in a decades-long tug-of-war with the Greek government over a restitution of the Elgin, or Parthenon, Marbles.

Such returns are controversial in Europe, where many museums hold works acquired during colonial times.

Across the English Channel, France’s president on Wednesday announced the “rightful return home” of 26 looted colonial-era artifacts being sent to the government of Benin – some of the estimated 90,000 African artworks held in French museums.

The wooden anthropomorphic statues, royal thrones, and sacred altars from the collection known as the “Abomey Treasures” were pilfered by the French army 129 years ago and are currently on display in Paris before being handed over to Benin on November 9.

President Emmanuel Macron visited the exhibit on Wednesday with Benin Foreign Minister Aurélien Agbenonci, who called it a “historic moment”.

Describing his long-standing efforts to get the works back, the foreign minister said, “No one could have predicted this happy outcome ... given how numerous the obstacles were.”

The 26 works are “an undeniable part of the cultural and religious identity of our country”, he said, calling the restitution a key step toward Benin’s efforts to develop its cultural sector and create jobs.

Macron is the first French president to call for systematic restitution of colonial art but acknowledged that only two items have been returned so far: a sword to Senegal and a crown to Madagascar. He called for “a law that would create a long-term framework for restitution” to make such art handovers smoother.

“These works will return home. They will find the men and women who will be able to understand the full power behind these works,” Macron said. “Their return home is a rightful return home.”