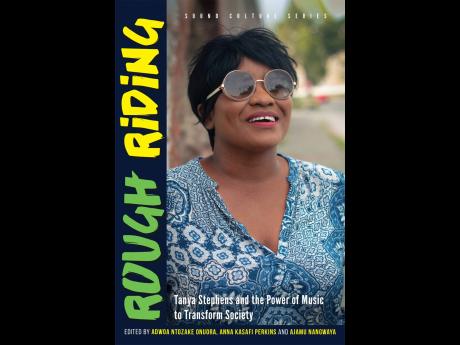 This collection of essays is the first of its kind to critically engage the oeuvre of Jamaican dancehall reggae artiste Tanya Stephens. Riding the hard-hitting, sensual, realness of Stephens, the contributors tackle her lyricism, social justice commentary, religious concern and political stance to argue for the importance of popular artistes in inspiring shifts in consciousness and, ultimately, the social order.

The book explores Stephens’ contribution via her socially conscious and transformative music produced over several decades. This, however, is the first volume to treat with her work and how it challenges taken-for-granted approaches to interpersonal and social life, in a class-divided, racially conscious national space.

Stephens is a cultural worker, an organic intellectual, who is very aware of the role of songs in consciousness raising, and deliberately sets out to educate everyone within earshot. She does not resile from controversy and is hard-charging in her approach on matters such as justice, treatment of the poor, sexuality, male-female relationships, and Christianity.

While the book recognises that social change is a long-term process, the work of conscientisation, through protest songs, can inspire our youth to become socially active. Contributors are a diverse group of scholars, activists and reggae professionals, including Professor Carolyn Cooper, who wrote the foreword; Mel Cooke; Tanya Batson-Savage; Nicole Plummer; Elsa Calliard-Burton; and Alpha Obika, to name a few.

Adwoa Ntozake Onuora lectures in the Institute for Gender and Development Studies, The University of the West Indies, Mona, Jamaica. She is the author of Anansesem: Telling Stories and Storytelling African Maternal Pedagogies.

Anna Kasafi Perkins is senior programme officer, Quality Assurance Unit, Office of the Board for Undergraduate Studies, The University of the West Indies, Vice Chancellery, Regional Headquarters, Jamaica. Her publications include Justice as Equality: Michael Manley’s Caribbean Theory of Justice and Justice and Peace in a Renewed Caribbean: Contemporary Catholic Reflections (co-edited with Donald Chambers and Jacqueline Porter).

Ajamu Nangwaya is a former lecturer in the Institute of Caribbean Studies, The University of the West Indies, Mona, Jamaica. He is co-editor (with Michael Truscello) of Why Don’t the People Rise Up? Organizing the Twenty-First Century Resistance and (with Kali Akuno) of Jackson Rising: The Struggle for Economic Democracy and Black Self-Determination in Jackson, Mississippi.