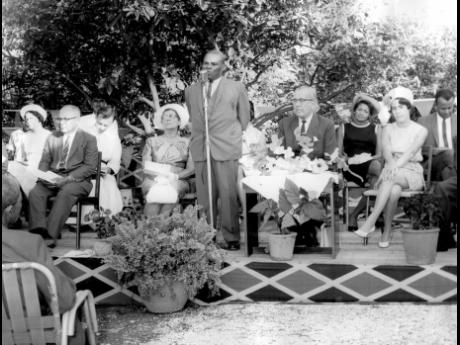 Gleaner Archives
In this 1967 photo, then Minister of Education, Edwin Allen, gives his address at the official opening of the Clare McWhinnie Memorial Branch Library, Race Course, Clarendon. Seated on platform in the front row are (from left) Mr. C. L. Stuart, Mrs. A. M. Pawsey, wife of the Custos of Clarendon; Mr. H. R. Sharp and Mrs. K. J. Pearson, secretary of the McWhinnie Memorial Library Committee. In second row, between Mr. Sharp and Mrs. Pearson is Mrs. Joyce Robinson, director of the Jamaica Library Services.

The McWhinnie Abrahams were a prominent family of merchants and planters in and around Chapelton, Race Course, and May Pen in Clarendon, in St Catherine, and in Kingston and St Andrew during the 19th and 20th centuries. The family is linked to Clarendon College as the site of their family home, Tavenore, has been the location of this college since 1943.

I think there can be no doubt that members of this large family, in various fields, have contributed to Jamaica’s development at the parish and national levels. This week, I am focusing on one member of this family, Clarence Ian McWhinnie.

It seems that with other male family members having the same name by Abrahams family tradition, in 1926, Thomas decided to change his name by deed poll to Thomas McWhinnie, removing Abrahams. His family’s surname would thenceforth be McWhinnie.

Clarence McWhinnie, known as Clare, attended Munro College and universities in England, where he qualified as an engineer. He married Briton, Dorothy Bishop, and lived at Milk Pen, Milk River, in Clarendon.

He established the Waterwell Engineering and Construction Company Limited of which he was managing director. This company was involved in the development of the Vere Plains underground water resources, improving the water supply in the parish. He was also involved in instituting a skills training programme (the Accelerated Training Scheme) for workers in the sugar industry centred on Moneymusk. In addition, Clare McWhinnie was a planter working in partnership with Jonathan Ezekiel Plummer (Ba John). McWhinnie was actively engaged in agriculture and education. He was known in the parish for his engineering work, these other interests, and his philanthropy. It is reported that he was well respected and very popular.

The year 1963 was extremely difficult for the McWhinnie family. Clare McWhinnie’s father, Thomas, died in Kingston on February 9, aged 81. On March 17, on an outing, Clare’s young son, Ian, aged about four, drowned, and, on March 19, on returning home from his son’s funeral, Clare McWhinnie, aged 52, died suddenly.

His funeral was held at St Peter’s Anglican Church, Alley, Clarendon, on April 1, 1963, and was attended by Prime Minister, Sir Alexander Bustamante and Lady Bustamante, family members, other dignitaries, and children from various local schools reflecting his interest in education.

The community in Clarendon wanted to honour the memory of Clare McWhinnie. Through public fundraising, the McWhinnie Committee raised £7,000. It was decided to use this money to establish a library. The land in Race Course was donated by the McWhinnie family, and the Clarendon Parish Council and the Jamaica Library Board also contributed.

The Clare McWhinnie Memorial Library was opened at a ceremony on January 19, 1967. It was attended by the Minister of Education, Edwin Allen (JLP MP for Clarendon North-West) , the Custos of Clarendon, Alfred Maxwell Pawsey, and the Mayor of May Pen, Councillor George Atkinson. The opening was done by the wife of the Custos, Mrs Amy Kathleen Pawsey, Mrs Dorothy Moxsy McWhinnie, mother of Clare McWhinnie, and his wife, Mrs Dorothy Bishop McWhinnie. A photograph of Clare McWhinnie was unveiled. The library would be operated by the Clarendon Parish Library and the first librarian was Miss Winsome Gibson.

With continuing interest from family members, the McWhinnie Branch Library has been serving the community in Race Course and surrounding areas for over 55 years.

My thanks to those associated with Race Course, Clarendon, who shared memories.