Gleaner’s BEST IN CLASS: Candid Essays by Top Students is a must-have 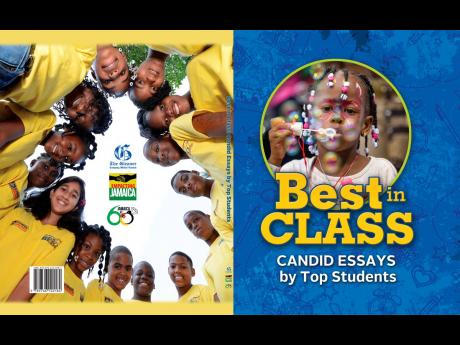 The Gleaner, one of the oldest newspapers in the western hemisphere, predates the abolition of chattel slavery in Jamaica in 1838. It has reported on every major national event and milestone since then. And, its archives are an enviable repository of the stories of the failures and triumphs of the Jamaican people.

To commemorate the 60th anniversary of Jamaica’s political Independence from Britain and to observe Child Month 2022, The Gleaner Company (Media) Limited delved into its archives and extracted some of its ‘photo of the day’. Students across the length and breadth of the country were tasked with creating essays from such photos.

The best essays were selected and are now compiled as a book called, BEST IN CLASS: Candid Essays by Top Students.

In the Foreword, Maureen Samms-Vaughan, professor of child health, child development and behaviour at The University of the West Indies, Mona, writes, inter alia, “ The Gleaner has through the years been a beacon in highlighting both our strengths and our challenges as a country in upholding the rights of children. This publication, in which the voices of children are heard through their social commentary, epitomises the participation rights of children, allows us to understand their perceptions of themselves as citizens of Independent Jamaica and their perceptions of the attainments of their rights accorded by the Jamaican Constitution and the UNCRC (United Nations Convention on the Rights of the Child).”

In the Introduction, Diahann Gordon Harrison says, “As Jamaica’s Children’s Advocate, therefore, I am heartened that our children are being included through this medium and it is my hope that this very public acknowledgement of the importance with which our children are regarded will serve as a catalyst across diverse sectors of our nation and in all our communities.

“It was the late Nelson Mandela who said, ‘There can be no keener revelation of a society’s soul than the way in which it treats its children’.”