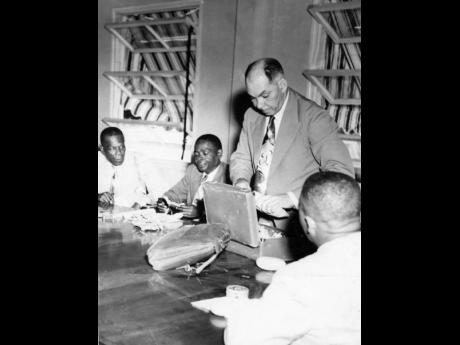 In Jamaica’s history, anecdotes abound about people, places and events. Growing up, I heard stories which indicated that some of those elected to the Legislature in 1944 were not qualified. One such was Isaac William Augustus Barrant, who was elected the Jamaica Labour Party’s (JLP) representative for Eastern St Thomas in the 1944 general election. I heard that he was only functionally literate and had been a sideman on a truck.

A letter to the editor in The Gleaner of September 20, 2011 titled ‘Isaac Barrant deserves more appreciation’, says: “His success confounded many since he had limited education and rose from a manual worker. He beat the colonial stigma to become an MP and a government minister.”

Barrant was born in Bath, St Thomas, on September 21, 1907. He was the son of Alexander McMion Barrant, a cultivator, and Catherine Barrett. He was raised by his aunt, Mary Barrant. Isaac was educated at Bath Elementary School, 1914-1923. He apparently also received private tuition. The Gleaner does indicate that his first job was as a sideman on a truck. He went on to become a supervisor, labourers’ headman, with Parochial Roads in St Thomas. He was a banana dealer with the United Fruit Company. From 1933-38, he worked at the Pringle Estates and Jamaica Sugar Estates Limited. He was appointed supervising secretary of the Bustamante Industrial Trade Union (BITU) in St Thomas in 1939 at age 32.

Barrant retained his Eastern St Thomas seat in the 1949 general election, which was also won by the JLP. In 1950, he was elevated to ministerial post when he was appointed the second minister of agriculture and lands following Edward Rupert Dudley Evans. He held this position until 1954. General election was held in January 1955, and although he retained his seat, the JLP lost to the People’s National Party (PNP) led by Norman Manley. According to C. Roy Reynolds in a 1997 commentary, Barrant was quite a successful minister of agriculture and lands. He took advice and got things done.

Barrant died on August 18, 1956, aged 49, after a brief illness. He was buried on August 21. He was described in The Gleaner as a loyal and fearless representative of the people.

There were many other tributes to Isaac Barrant but I choose this one. In The Gleaner of September 2, 1956, the column ‘Parliament and Politics’ referred to Isaac Barrant as a truly remarkable man, who was genuinely representative of the social change which had been wrought in Jamaica from 1938-1944. He was considered a symbol of good sense, of the practical ability of Jamaicans to govern themselves in free democratic institutions. Barrant epitomised that fact as no other politician had done, and he was the outstanding evidence in Jamaica’s claim for self-government.

On July 24, 1954, Isaac Barrant’s constituents had a function in his honour to show their appreciation for his service as their representative. The Gleaner records his response in part as follows:

“I have listened intently to the address read to me, and I wonder in my heart of hearts if I do really merit all the kind things said to me. I have faith in myself and I know that I shall continue to do the job entrusted to me. My character, politically, is clean, and anyone who comes to me must be dignified and clean too. In my task of representing you, I will stop at nothing to bring you the things that you need most.”

He did not have a secondary or tertiary education, but my impression is that Barrant’s achievements in the political arena is an example for today. He served and delivered.