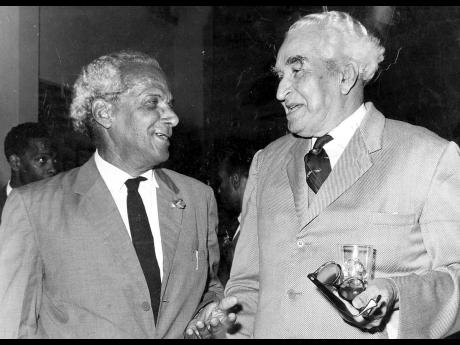 Gleaner Archives
In this 1969 photo, two famous cousins and national heroes, Sir Alexander Bustamante (right) and Norman Manley, greet each other at the Jamaica Broadcasting Corporation’s building in Kingston.

On January 30, I wrote about the first government ministers appointed following Constitutional Reform and the first general election for the House of Representatives held under Universal Adult Suffrage in December 1944. This election was won by the Jamaica Labour Party (JLP) led by Alexander Bustamante. After also winning the 1949 general election, Bustamante became the first chief minister when the Constitution was further reformed in May 1953, establishing this position and a more conventional Cabinet with expanded members within the executive council.

Another general election was held in January 1955, which was won for the first time by the People’s National Party (PNP) led by Norman Manley. Manley then assumed the post of chief minister and appointed his Cabinet members.

The Cabinet was as follows:

The Constitution was further reformed and proclaimed on July 4, 1959. A general election was held on July 28. This election saw Norman Manley and the PNP returned to Government. Manley was appointed the first premier of Jamaica.

The new Cabinet was sworn in on August 15, 1959. While some names remained from the previous Cabinet, there were portfolio changes and new appointments.

Some of these ministers and parliamentarians became well known in Jamaica’s progression through Federation, Independence, and into the post-Independence period. Others have faded from Jamaica’s political history, even when communities and schools bear their names.

I find that both the JLP and PNP, as organisations, need to do more to ensure that the history of their members are recorded, keeping the memory of their service both to the parties, their constituencies, and the country alive for posterity. What about having members’ legacy databases and ensuring that the museums to founders/leaders, such as former homes, are well maintained and utilised. After all, they tell your story.