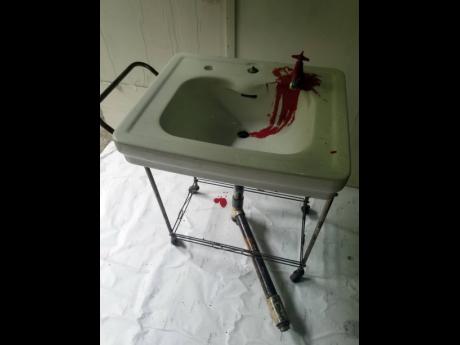 Paul Williams
Standpipe – The blood from the tap splashing on to a white basin created by Mazola. 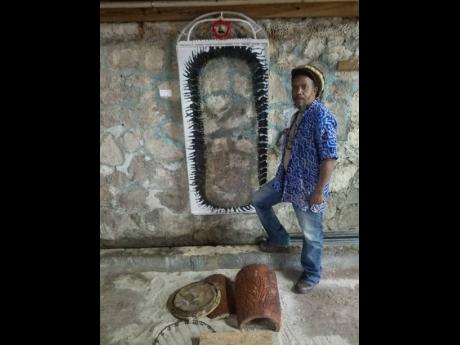 Paul Williams
Mazola standing in front of his artwork, ‘At the gate of no return’. 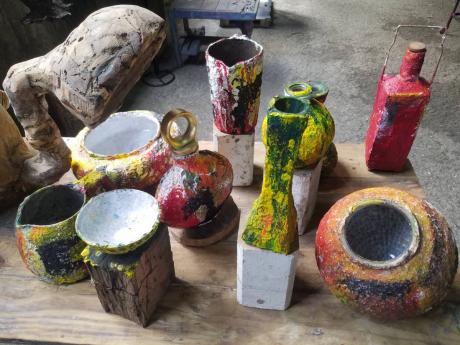 Paul Williams
Out of many by Mazola. 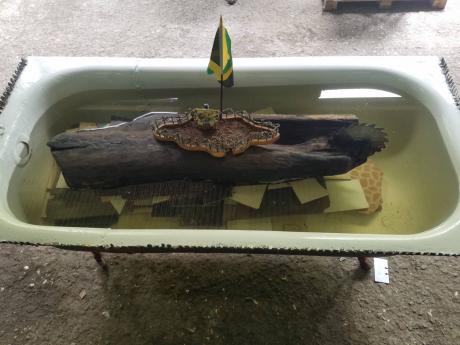 It is said that the name Jamaica evolved from Xaymaca, an Arawak word meaning land of wood and water. It was Paradise, an idyllic garden in which the Tainos, an Arawak-speaking people, lived, worked, and played. That idyll was brutally disrupted and eliminated when the Europeans chanced upon it in the late 1400s.

Over 500 years afterwards there is still trouble in Xaymaca. Mazola, the prolific Kenyan-Jamaican artist, an assemblage specialist, has documented it with found objects. The thought-provoking pieces were on display in a show called The Garden of Xaymaca from May 7-14 at ‘The Playground’, situated at Craig Hill in east rural St Andrew.

Mazola has been working at that spot since 2016, and now it is time to take off again. It is a major turning point in his life, which actually started late last year with another show. And instead of removing the pieces as mere material, he has put some of them together as “structural installations” for he wanted to go out with a bang, and what a noise these pieces of ‘bangarang’ have been making.

They are socio-political commentaries, depicting genocide, ancestral stories, colonial vestiges, generational trauma, rebellion against the institution of the Church, psycho-sexual foibles, and the need for healing and redemption. From the near annihilation of the Tainos to the vexatious issue of Crown land, which was stolen from the Tainos, Mazola has used discarded objects to expose the psycho-social ills that are permeating Paradise, Jamaica.

The blood from the tap splashing on to a white basin is jolting. The Tainos are discovering and welcoming Christopher Columbus who has a gun dangling down his back while hanging from a rosary. Paradise, on which the Jamaican flag is hoisted, is completely enclosed by a barbed-wire fence. People are wailing at the ‘Door of no return’ while broken drums lie on the beach on Goree Island, Senegal. Weapons, and not meat, are being jerked daily. The Crown land sits on a throne.

That is the type of work that he said he would like to do more of. “I’ve never had more work concentrating on issues like these,” he told Arts and Education, “work that is very powerful.” Yet his work has never been art for the sake of art. It has always been purposeful, for he is an artist who is very deliberate. He tells stories with his pieces. And as much as he does not sketch them before executing, he knows the essence of what he wants to convey and how he wants to depict them, adjusting and changing as the work progresses.

In addition, they are cautioning us about what “we are putting out there”. “We are destroying Paradise, slowly but surely, environmentally and spiritually,” Mazola remarked. Now, through the pieces, he is asking what we are going to do about the damage already done, why we continue to kill or destroy, why we are still crying, why we are still making other people cry, how we are going to sort out the mess we are in. Thus, it is time to heal, the pieces are saying indirectly. They are subliminally asking for an end to the trouble in the Garden of Xaymaca.