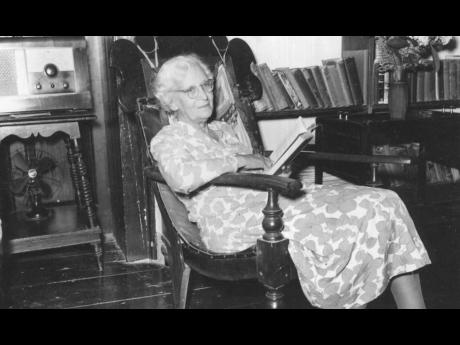 Gleaner Archives
Una Wilson, one of the five Jeffery-Smith sisters.

The Jeffery-Smith sisters, 1908 and onwards, were well-known in Jamaica in education, being teachers, and as pioneers in the Girl Guides Movement. These women made a major contribution to education and social development. The Gleaner in 1970 said the sisters always considered themselves Jamaicans. They occupied a special place in the life of the country by virtue of their abilities, character, and service.

Charles Augustus Jeffery-Smith, born in about 1854 possibly in Britain, seemed to have come to Jamaica in 1870 and joined the Public Works Department, retiring as superintendent of public roads and works in St Catherine in 1915, when he also died. His wife was Floretta Augustine Jeffery-Smith (1856-1936). They had several children, including daughters Blanche, Una, May, Daisy, and Ivy. There were brothers, Charles Constantine, who seemed to have lived in Canada and Sergeant Leslie C. Jeffrey-Smith, who was killed in WWI. The children all seemed to have been born in Jamaica and grew up at historic Durham House on White Church Street in Spanish Town, St Catherine. They attended the St James’ Anglican Cathedral there.

Una Adeline, born in 1880, married Dr Wilbert Wilson in 1913. Their six children included Dr Una Elizabeth (Beth) Jacobs, born in Alexandria, St Ann, in 1917. In 1899, Una Jeffrey-Smith wrote and published a book of Jamaican Anancy stories. In 1903, she was assistant head mistress at the Cathedral Girls High School (now St Jago) in Spanish Town. She later became headmistress at St Hilda’s High School for Girls. Una spent most of her life in Brown’s Town. She died in 1973, aged 93.

May Thorton, born 1882, was both an educator and social worker. She attended Wolmer’s Girls School and universities in England, where she also taught for a while. She was first assistant mistress from 1919 and later principal at Westwood High School from 1928-1944. She was the first woman in Jamaica to be commissioned a justice of the peace in 1945. She was associated with St Jago and St Catherine High schools. She was a lady involved in many activities in St Catherine and Trelawny, including the Girl Guides and playing cricket and birdwatching. May was awarded the MBE for her services in education and social development in 1945.

Daisy Everleigh was born in 1885. She founded the Girl Guides in Jamaica in 1915 and remained devoted to its development. She was also headmistress at the Cathedral Girls School. Daisy died at her home in Spanish Town in January 1970.

Ivy Amaryllis, born in 1892, was a student at the Cathedral Girls High School in 1907. She was also involved in education and the Guides. Her other sisters having predeceased her, she survived a fire, which destroyed her historic family home, Durham House, on June 12, 1982. Ivy died in St. Andrew in 1987 aged 95. Like May, she was interested in birdwatching, about which they wrote a book together.

The sisters, Daisy, May, and Ivy, all received the highest international honours for their leadership in the Girl Guides. If there is disappointment, it is that the Girl Guides Association does not appear to be as vibrant a movement today as it once was. Current information online does not mention the Jeffrey-Smith sisters.