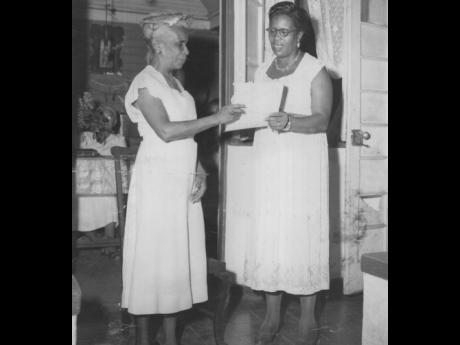 Gleaner Archives
In this 1957 photo, Leila James Tomlinson, founder of the islandwide family council, is seen with Elfreda Watson, foundation member of the council and founder of the Whitfield Town (No. 1). 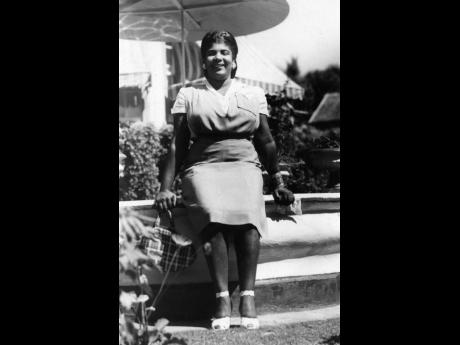 In researching the role of civil servants in the pre-Independence period, the discrimination against women has been revealed. In the struggle to have women employed in the civil service and to improve their conditions of employment, giving them equal status with men, two other women have come to my attention who should be highlighted.

These are Leila James Tomlinson and Vera Crosskill Murphy. Both were Wolmerians. Leila Frederika James, born in 1894 in Kingston, joined Wolmer’s in about 1904, and Vera Lucille Crosskill, born in 1910 in St Ann, joined in 1920.

Leila James was the first female Jamaica Scholar in 1912, which allowed her to attend the University of London. She graduated in 1915 with a BA Honours degree. This was during World War I when the British civil service had begun to employ women in significant numbers.

On returning to Jamaica, James was employed temporarily as a sub-examiner in the Department of Education, a post usually held by a man. There were those who did not approve of her employment. She remained in the Department of Education until March 1920 and would have expected to be appointed with good performance. Instead, her post was made redundant. Note that the British Sex Discrimination Removal Act had been adopted in 1919.

A Commission of Enquiry was established to look into her dismissal. The commission, in February 1921, ruled that she had been unfairly dismissed. She was, however, not reinstated in her post. It was recommended that she receive one year’s salary and another post in the service. I assume that meant a lower post appropriate for a woman. Her case was reported in The Gleaner and was considered unjust. It highlighted the depth of gender bias in the civil service. Leila James resigned and left Jamaica in 1921. She worked in Costa Rica, Bermuda and in Africa as an educator. Leila James Tomlinson returned to Jamaica in 1941 to work with Jamaica Welfare. She had a long and illustrious career in education and social work promoting the interest of women and families. She died in 1979 aged 82.

In 1943, Vera Crosskill led a deputation to the Civil Service Commission to petition for women in the civil service to have their qualifications recognised, to be eligible for study leave, to be considered for promotion, to receive equal pay for equal work, and to end the marriage bar preventing married women from working in the civil service. With the support of the Jamaica Civil Service Association, the women’s advocacy bore fruit.

In 1952, Vera Crosskill Murphy became the first woman promoted to the post of island statistician at the Bureau of Statistics, thus becoming the most senior woman in the Jamaican civil service. She had married Vincent Hubert Murphy in 1950. The marriage bar had been lifted. In addition, as my article of last week addressed, in 1953, three women entered the administrative grades as administrative assistants (cadets).

In 1959, Vera Murphy was appointed secretary to the newly established Pensions Authority. Working in the interest of pensioners islandwide, she was involved in the creation of the National Insurance Scheme (NIS), introduced in 1965. Mrs Murphy retired in 1962, and went on to a successful career in insurance.

Throughout her life, she was involved in theatre and the Girl Guides. She died in Miami in December 1987, aged 77.

Leila James Tomlinson and Vera Crosskill Murphy both received national honours. At independence, the status of women in the civil service had improved, although there was further to go.