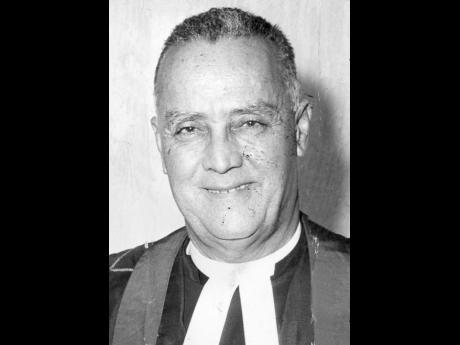 “Before God and all mankind, I pledge the love and loyalty of my heart, the wisdom and courage of my mind, the strength and vigour of my body in the service of my fellow citizens; I promise to stand up for Justice, Brotherhood and Peace, to work diligently and creatively, to think generously and honestly, so that Jamaica may, under God, increase in beauty, fellowship and prosperity, and play her part in advancing the welfare of the whole human race.” The National Pledge

This past week, we have heard, with great pride, the National Anthem played on the world stage as our athletes performed with excellence at the World Athletics Championships in Eugene, Oregon. When it comes to the National Pledge, I would bet that not many Jamaicans know it from memory. These are emblems/symbols of nationhood that had to be in place as the country made frenetic preparations for Independence Day, August 6, 1962.

I have already featured Eguene Mapletoft Poulle and Robert Charles Lightbounre who were involved in crafting of the National Anthem, “Jamaica, Land We Love”. An extremely important contributor was Reverend Hugh Braham Sherlock (1905-1998), who wrote the words, a prayer. It is reported that he said he wanted it to be a humble Christian Prayer for his country.

Rev Sherlock also wrote the National Pledge, which should be known from memory by every Jamaican and should be displayed in all public buildings as, by it, we all dedicate ourselves to be useful citizens of Jamaica and the world.

Much has been written about eminent Methodist Minister, Rev Hugh Braham Sherlock, who received many awards, including the Order of Jamaica in 1979.

Hugh Sherlock was born in Manchioneal, Portland, on March 21, 1905 to Methodist Minister, Rev Terance Manderson Sherlock (1864-1936) and his wife, Adina Alberta Troths or Trotter (1879-1973). He had possibly six siblings, one of whom was renowned historian and educator, Sir Philip Manderson Sherlock (1902-2000). K. Churchill Neita, in his 2020 article, states that Hugh grew up in a home that inculcated Christian values and a commitment to nation-building.

He attended Calabar High School. Some sources say that he also attended Beckford and Smith High School, now St Jago. He entered the civil service in 1922, where he worked for five years. Following in his father’s footsteps, he entered Caenwood Theological College and was ordained a minister of religion in the Methodist Church in 1932. He was first stationed in the Turks and Caicos Islands from 1932-1937. Returning to Jamaica, he worked in the Ocho Rios circuit of Methodist Churches and was founder/director of Boys’ Town in west Kingston, remaining there until 1956.

In 1942, he married Thelma Coole and they had two daughters.

“Father” Hugh Sherlock loved music and is known to have written hymns. He also loved sports such as cricket and football.

We sing the National Anthem with gusto on official occasions and at sporting events. Do we really reflect on the words and endeavour to live them?

The lasting tribute to Rev Hugh Sherlock should be that we actually commit to live by both the words of the National Anthem and the National Pledge as we celebrate 60 years of independence and move into the future.