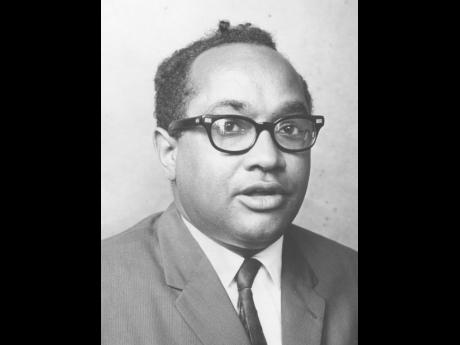 With Jamaica poised to become an independent nation on Monday, August 6, 1962, it had to be prepared not only to have its own national emblems/symbols, but it had to now assume responsibility for its own foreign policy and defence. So the Government had to determine the direction of Jamaica’s foreign policy, and it had to establish a ministry responsible for foreign relations. This also meant establishing diplomatic missions overseas, thus creating a foreign service.

So newly elected Premier Alexander Bustamante and his Cabinet turned their attention to identifying experienced staff. In my articles on the civil servants, I pointed to some of those who would be founding members of Jamaica’s Foreign Service – Edgerton Richardson, Vincent McFarlane, Patrick Burke, Frederick Degazon, and Carmen Parris.

On Wednesday, July 27, the Ministry of Foreign Affairs and Foreign Trade had its inaugural Foreign Service Day, hosting past and present members of the Foreign Service. Among the most senior retired Foreign Service oficers present was Ambassador Probyn Vivian Marsh, educator and diplomat, now 94 years old. He was among those recruited at the outset to what would become in August 1962, the Ministry of External Affairs, then in the Office of the Premier.

Probyn Marsh was born in Labyrinth, St Mary, on August 11, 1928, son of Robert Vivian Marsh, 1886-1936, a pen keeper, managing Industry Estate, and his wife, Mabel Jane Wallace, 1894-1943. They were married in 1922. Probyn had for siblings. It is said that if your surname is Marsh and you hail from Gayle, Industry, and Epping in St Mary, you are a descendant of planter, John Templeman Marsh, 1867-1927. Ambassador Marsh confirms this. The Marsh clan is large.

Marsh attended Gayle Primary School. He then went to Kingston College, 1941-1947, on a government scholarshi excelling in French and Latin. He was awarded a Jamaica Centenary Scholarship in 1947, which took him to Queen’s College, University of Cambridge in England from where he graduated with a Bachelor of Arts (Hons) degree in Ggeography, a aster’s degree, and a Diploma in Education as recorded in The Gleaner.

On returning to Jamaica in 1952, he taught at Kingston College for nearly three years. He was also involved in organising extra-mural courses at the University College of the West Indies. Thereafter, in 1954, he accepted a post as senior geography master at Fijai Secondary School, Secondi-Takoradi Township in Ghana.

Returning from Ghana, he stopped off in London, where he joined the West Indies Commission. In 1960, he married British national Christine Wright. They had a daughter, Alison.

In the same year, under the WI Federation, Marsh was awarded a Carnegie Endowment Scholarship to undertake Foreign Service studies at Columbia University, USA. He earned a Diploma in International Relations. By then, the Federal experiment was over, and Jamaica was on the path to independence. Returning in 1961, he was appointed to the Office of the Premier.

After April 1962, Ambassador Marsh recalls being summoned by the new Premier, Bustamante, who said to him “they tell me you know about diplomacy”.

Marsh was assigned to the fledgling Ministry of External Affairs. He was appointed first secretary in the newly established Permanent Mission of Jamaica to the United Nations in New York. He went on to be appointed Deputy Permanent Representative of Jamaica to the UN in Geneva, Switzerland, 1970-1972 and, after, ambassador to France, 1972-1975.

Marsh was awarded the Order of Distinction in the Commander rank in 2015. He was a long-time member of the Alliance Française.

Marsh, at 94, still has clarity of mind. He told me that through his diplomatic career, he was pleased to have helped Jamaicans to have a better understanding of the world they lived in and to have been involved in Jamaica promoting human rights and non-alignment in its foreign policy. He recalls Jamaica’s participation in the first UN Conference on Human Rights held in Tehran, Iran, in 1968 and in the third Non-Aligned Summit in Lusaka, Zambia, in 1970.

It is good to still have some of those who were there 60 years ago sharing their memories, in this case, of the challenging early days of our small foreign service.