India at 75 – evolution of the national flag 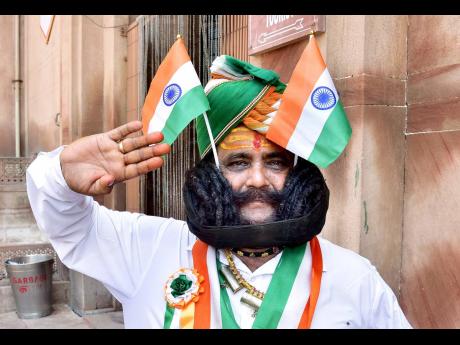 ANI
Girdhar Vyas, claiming have the longest moustaches in the world, poses with the National flags as part of the 75th Independence Day celebrations, in the western Indian city of Bikaner. 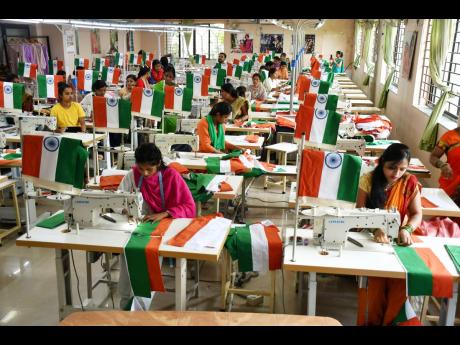 ANI
Women workers from the Khadi Board stitch the Indian national flags in the eastern Indian city of Ranchi. 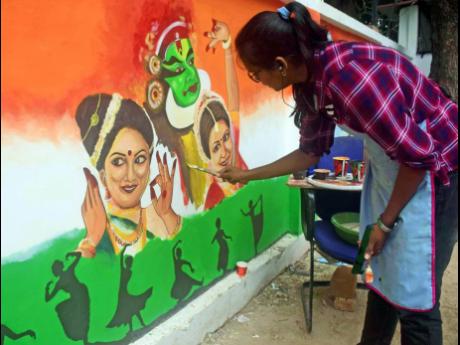 ANI
An art student gives final touches to a wall painting to celebrate India’s Independence Day, in Prayagraj (Allahabad), a city in the northern Indian state of Uttar Pradesh. 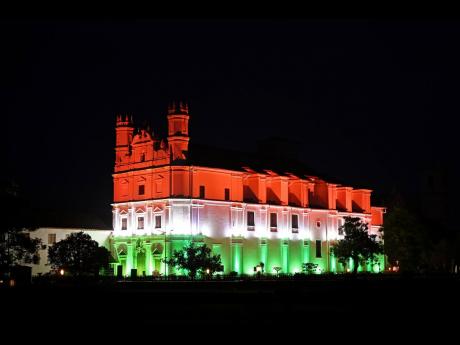 ANI
Se Cathedral Church in the west coast city of Goa is illuminated with the tricolour. 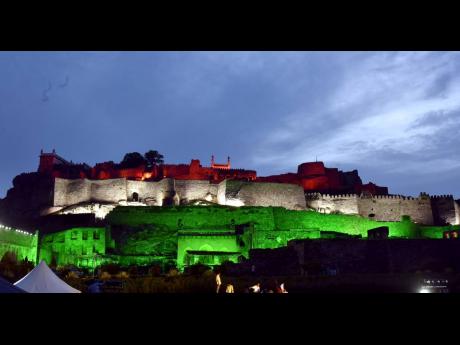 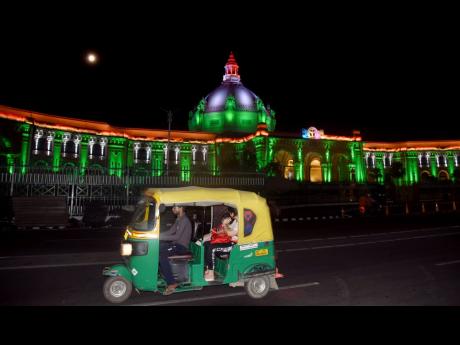 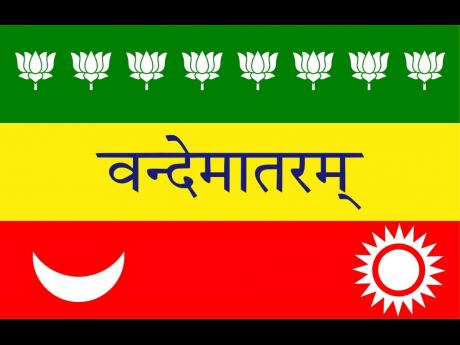 Wikimedia Commons
One of the earliest variant of the Indian flag: The Vande Mataram flag, with eight white lotuses on the upper green band representing the eight provinces, a sun and a crescent on the bottom red band, and Vande Mataram (hail thee o mother) in the middle band. 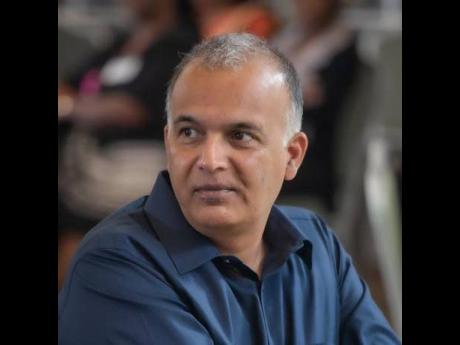 Every country has stories to tell, paths of history that it has walked on, and foundations upon which its future is built. A country’s flag, is a symbol of its freedom and identity, and its inherent value systems – the Indian tricolour encapsulates them all.

The Indian flag went through metamorphoses over the centuries. It was after the rebellion (also known as the first war of Independence) in 1857 the first flag was raised by the British. The design was similar to the flags of their other colonies. Red in colour, it included the Union Jack in the upper-left quadrant and a Star of India capped by the royal crown in the middle of the right half.

One of the earliest variants was the Vande Mataram (hail thee o mother) flag, which was part of the nationalist Swadeshi movement, comprising Indian religious symbols represented in Western heraldic fashion.

The tricolour flag included eight white lotuses on the upper green band representing the eight provinces, a sun and a crescent on the bottom red band, and the Vande Mataram slogan in Hindi on the central yellow band. The flag was launched in Calcutta. At each point of India’s history, the design of the flag was representative of that era.

The national flag of India is a horizontal tricolour of deep saffron at the top, white in the middle, and dark green at the bottom in equal proportion. The ratio of width of the flag to its length is two to three. In the centre of the white band is a navy blue wheel, which represents the chakra.

Its design is that of the wheel, with 24 spokes, which appears on the abacus of the Sarnath Lion Capital of Ashoka – which is the national symbol of India.

The saffron colour represents strength and courage of the country, the white middle personifies peace and truth, with the Dharma Chakra (wheel of law), and the at the bottom, green signifies fertility, growth, and auspiciousness of the land.

The Dharma Chakra, which is symbolic predominantly in Buddhism, was made by the Mauryan Emperor Ashoka in third century BC. The chakra depicts that there is life in movement and death in stagnation. The Indian tricolour personifies the value systems that have evolved and continue to inspire generations – truth, righteousness, humility, peace, and universal brotherhood. India earned freedom on the sacrifices of millions of people, some of them who even laid down their lives in the hope to see their country free from the British rule. The flag, in whatever variant, was a symbol of courage for these freedom fighters, most who did not live to breathe in free India. Their sacrifices did not go in vain – even with the trials and tribulations India, as a young independent nation, has thrived.

Mahatma Gandhi once said: “My religion is based on truth and non-violence. Truth is my God. Non-violence is the means of realising Him.” Let peace and happiness be our religion, too.