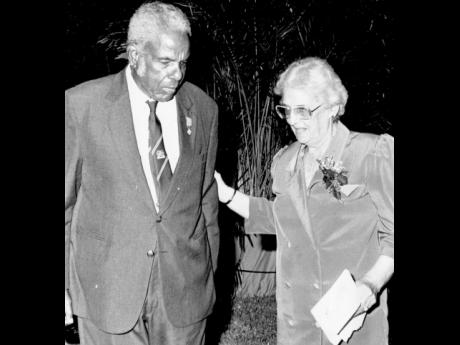 Theodore Eustace Sealy, 1909-2001, was associated with The Gleaner newspaper for over 50 years. He had a front-row seat to many events of national and regional importance after he joined the newspaper’s editorial staff at a junior level in 1928, age 19, until his retirement in 1976.

Sealy was a major figure in Jamaica’s move to independence. As the editor of The Gleaner, he was in London in February 1962 reporting on the Jamaica Independence Conference at Lancaster House. In The Gleaner of February 2, 1962, he reported on the opening day of the conference. He noted that British Colonial Secretary Reginald Maudling, in his remarks, commended Jamaica’s astonishing economic development since the end of World War II and that Premier Norman Manley, in his opening remarks, he reminded that Jamaica was still a poor country with poverty, hunger, and unemployment.

At the conference, Jamaica’s delegation, made up of representatives of government and opposition, was focused on formulating a new constitution and agreeing on the date for independence. The date was announced in Sealy’s Gleaner report on February 9, 1962, as August 6. At the close, Sealy obtained a statement from Leader of the Opposition Sir Alexander Bustamante in which he said that an issue equally as important as gaining independence was making a success of independence, which could not be done by a few, but required the entire Jamaica to unite in the great task. Bustamante also recognised the need to address unemployment, poverty, and hunger.

Sealy was appointed by Manley, and endorsed by Bustamante, to chair the Independence Celebrations Committee. So he played a central role in the preparations for the celebration of Jamaica’s Independence Day, including the selection of national symbols.

Theodore Sealy was a giant in the field of journalism in Jamaica and much has been written about him. It could be said that during his tenure, he and The Gleaner were a single unit.

He was born in Corozal, British Honduras, now Belize, on November 6, 1909, the son of Barbadian Simeon Alfred Sealy, a businessman-policeman, and his Jamaican wife, Mathilda Eliza Brown (1868-1953), a businesswoman. Following elementary school, he attended Kingston Technical High School and St John’s College. After leaving school in 1926, he went into teaching and then transferred to journalism, starting his long and distinguished career at The Gleaner. On December 16, 1936, he married Myrtle May Bayliss and they would have three daughters. In 1938, he organised the All Jamaica Art Exhibition and was founder and organizer of the Sir Edward Denham Shield annual art exhibition for schools.

In the 1940s, Sealy was awarded The Gleaner’s first Michael DeCordova Scholarship to study British newspaper methods. On returning in 1946, he was appointed associate editor at the Gleaner. He was promoted to editor in 1951. He was appointed director of the Gleaner Company in 1971 and editor-in-chief in 1973. His achievements at The Gleaner are many, including modernising the newspaper and establishing THE STAR, the Children’s Own, and the Spelling Bee.

Sealy was chair of the Jamaica Tercentenary Celebrations in 1955, commemorating 300 years of British rule, which, no doubt, made him an excellent candidate to chair the Independence Celebrations Committee.

He was involved in establishing the Caribbean Institute for Mass Communications (CARIMAC) at The University of the West Indies to train regional journalists.

His achievements and awards received are many. Sealy died on June 18, 2001, aged 91. His contributions to The Gleaner, journalism, the arts, and Jamaica’s development should be fully recorded and long remembered.