Drone superhighways and airports are coming 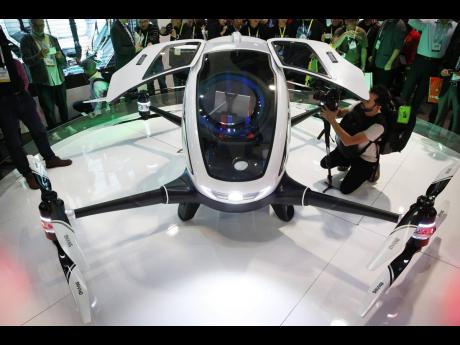 AP/ File
In this 2016 photo, EHang 184 autonomous aerial vehicle is unveiled at the EHang booth at CES International.

Within just two years, the United Kingdom (UK) could be home to the planet’s biggest drone superhighway thanks to the plans of a group of technology companies. It sounds like something out of a science fiction movie, but it is just one of a number of projects in the pipeline as part of the UK government’s drone-ambition statement announced recently.

But it is important not to get carried away. These plans could change British skies and people’s lives. Now is the time to think about whether the noise, safety risk, and disruption to family neighbourhoods is worth it.

Right now, UK laws restrict the use of pilotless drones. But the Skyway will allow automated drones, using ground-based sensors installed along the highway. These sensors provide a real-time view of where drones are in the airspace.

The 164-mile “Skyway” aims to connect the airspace above Reading, Oxford, Milton Keynes, Cambridge, Coventry, and Rugby by mid-2024 and will receive more than £12 million government funding.

Some of the other aerospace projects include air taxi services, which will transport people and cargo. They need landing pads as big as a small airport.

Next year, a pilot for the world’s first electric urban airport will start construction in Coventry. Hyundai plans to build 200 such urban airports in the next five years.

A proliferation of delivery drones is also likely to lead to new logistic centres, which could be designed as bee hive-like hubs as seen in a patent filed by Amazon.

UK planning rules will have to change dramatically to accommodate these new structures, and the public must be consulted and the community benefit made clear. Yet the UK government has presented plans for the Skyway before it has decided on the infrastructure changes needed to make way for it.

It is not alone in this respect. Several countries, including Germany, Singapore, and the United Arab Emirates, are locked in a space race to establish drone and air taxis. Technological drone innovation is being approved before regulation is established and ahead of a proper assessment of the ethical implications.

If people are to have a proper say in the plans, they need the right information about the technology involved. A recent survey (March 2022) showed that the UK public was about evenly split between those who said they had a good understanding (31 per cent) of drones and what they are used for, those who had some understanding (36 per cent), and little understanding (33 per cent). The same study found that 54% of participants would be uncomfortable if they saw drones regularly.

The transfer of military technology such as drones into public life leads to a marked difference between the pace of innovation and people’s understanding of its impact. Many benefits result – for example, transporting medical supplies to remote areas – but ethical issues are also created and governments need to communicate this.

One of the most obvious problems is privacy as drones often record and capture images. Another key issue arises from the fact that drones are likely to fly at the bottom of airspace (up to 400 feet in the air) and so will increase noise and air pollution.

Drone flight paths are likely to be built around existing transport hubs, railway corridors, and airports. The people who live in these areas will suffer the most from pollution and congested skies.

Plans to open a noisy bar, takeaway restaurant, leisure complex, or even just next door’s new extension can have a devastating impact on your quality of life. Imagine if the skies above your home slowly started to fill with buzzing drones.

Aerospace is a safety-led culture, but drone cargo delivery handover and landing carries much greater risk of collision with low level objects, buildings, structures, or people. We don’t know exactly how dangerous this will be because it hasn’t been done on this scale before.

Recent research shows that people have other red lines when it comes to drone and air-taxi development. These include protecting wildlife and taking measures to prevent pilotless drones from being hacked.

All these issues show why announcing a road map for commercial drone rollout is easier than winning public support for it. It doesn’t take much for people to become concerned about drone use. For example, nearly two thirds of the UK public say the 2018 Gatwick airport incident, in which drone sightings forced the airport to close for two days, negatively influenced how they think about drones.

As a result, there is likely to be opposition to future drone delivery, but how the mechanisms of government respond is yet unclear. However, there are some key principles that could help.

The use of data from drones should be ethical and transparent. Commercial operators need to tell the public about when their drones will record images and video in surveillance.

They need to reassure us that AI technology used in pilotless drones is trustworthy and whether facial recognition algorithms or other analytical tools are been used, outline how the public’s data will be protected and how third parties may use it.

Research has shown that people find even small-drone noise annoying. You can imagine how much worse the problem will be with air taxis and new drone designs.

Surrounding architecture and even local micro climates can amplify take-off and landing noise from drones. The simple solution to this will be for engineers to design quieter models.

The EU’s safety and regulatory frameworks for drones and drone deliveries in urban environments were set out in 2020 and updated in 2022. But national governments will need to follow through with the detail and delivery of drone regulation.

Perhaps most vital, however, is that the public is given a chance to get to grips with drone technology and how it will affect them before it’s too late to have a say.

Paul Cureton is senior lecturer in Design (People, Places, Products), at Lancaster University. This article is republished from The Conversation under a Creative Commons licence.