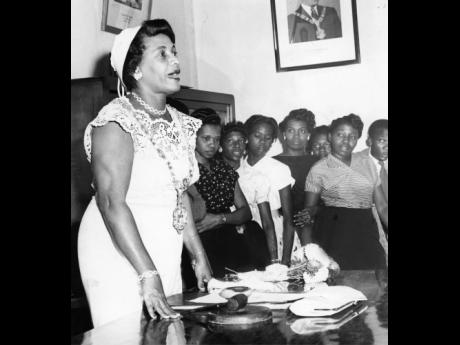 Gleaner Archives
In this April 1958 photo, the first woman mayor of the Corporate Area and the West Indies, Councillor Iris King, makes her maiden speech after she was invested with the chain of office.

Mrs Iris King is one of the women pioneers in Jamaica’s representational politics along with others such as Mary Morris Knibb, Iris Collins-Williams and Rose Leon.

She was born Iris Winifred Ewart, reportedly on September 5, 1910, to Thomas and Rebecca Ewart. She grew up in east Kingston, and attended elementary school and Kingston Technical School on Hanover Street. On leaving school, she was employed as a stenographer. On August 30, 1933, she married Seward Herman Augustus King, likely a harbour pilot. They would have four children.

She was thereafter a housewife but entered politics in 1938, becoming a campaigner for the newly founded PNP. In 1947, she was elected a parish councillor in the Kingston and St. Andrew Corporation (KSAC).

In 1950, she registered to improve her education by attending Roosevelt University in Chicago, USA. She graduated with a degree in municipal administration and political science.

In 1955, she was a candidate in the GENERAL Election and was unsuccessful. She returned successfully to the KSAC and, in 1958, was the first woman to be appointed mayor of Kingston. It seems that as mayor she was quite well regarded.

In 1959, she was again a candidate for a seat in the House of Representatives. She won the Kingston West Central seat. But, she remained KSAC councillor and mayor of Kingston. It seems she was invited to participate in Norman Manley’s Cabinet. However, I see no evidence, so far, that she was formally appointed to his Cabinet. Her continuing to hold both a KSAC seat, the post of mayor, and a seat in the House did cause some controversy.

She ran again in the general election of April 1962. The PNP lost this election but she retained her seat. She was devoted to serving the people of West Kingston and was known for her work at the Maxfield Park Children’s Home.

She migrated to the United States where she was employed as a hospital administrator. She died in New York in 2000, aged about 90.