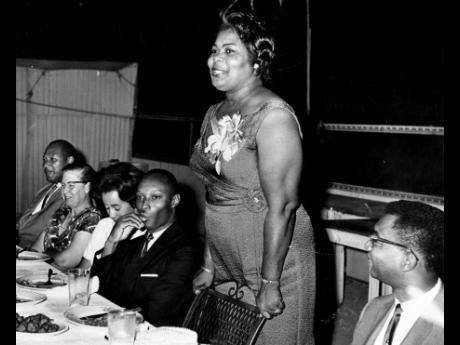 Gleaner Archives
Senator Esme Grant, parliamentary secretary in the Ministry of Education, speaking at the Annual Reunion dinner of the Ardenne High School Past Students’ Association on July 9, 1965, at the Cathay Club, Orange Street. From Left are: Ronald Douglas, Mary Olson, headmistress at Ardenne; Mrs and Rev. James Massey and Winston Roberts, chairman of the function.

Esme Melbro Muir, or Melbro Esmine Muir, was born in Cave/Bluefields, Westmoreland, on September 20, 1920. She was the daughter of Charles Edward Muir and his wife, Elizabeth Matilda Boothe, who had married in 1912. She had siblings, including brother, Hugh Isaac. Charles Muir seems to have been a cultivator/fisherman.

It appears that Esme Muir attended Mearnsville Elementary School at Cave in Westmoreland and was successful in the Pupil Teacher Examinations in 1934.

On December 22, 1940, Esme married Claude Errol Grant, a clerk, in Savanna-la-Mar. It seems that they had two daughters.

Grant was a teacher at Point Hill Government School in St Catherine in the 1950s. In July 1956, it was reported that she would be joining her husband in England where she was scheduled to do a course in librarianship at the North Western Polytechnic in London.

It seems that she joined the JLP, as was said, and was their unsuccessful candidate in April 1962, and was appointed to the senate. There, she was spokesperson on education. As parliamentary secretary in the Ministry of Education, her focus was primary education. In June 1962, she was awarded a six-month scholarship to Brandeis University in the USA to study television as an educational medium.

In 1972, the JLP lost the general election and Grant lost her seat to the PNP’s Jim Thompson. She retired from politics in 1975 because of ill health.

Esme Melbro Grant is another of the women pioneers of Jamaican politics whose career should be further researched and documented.