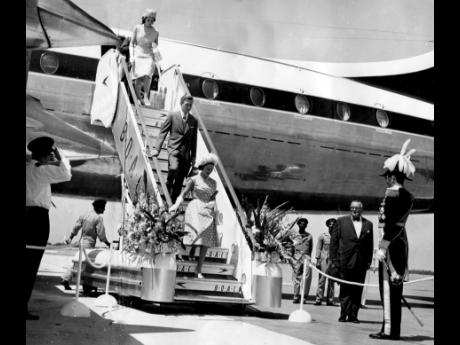 Gleaner Archives
In this 1962 photo Princess Margaret disembarks from the BOAC airliner in Kingston for Jamaica Independence Celebrations. Behind her is the Earl of Snowdon, followed by Fiona Myddelton, lady-in-waiting.

This was an enlightening discovery. At the end of World War II, Britain’s colonies began to seek independence. The first were India and Pakistan in 1947. Britain offered a parting development-aid package to some former colonies, which has become known as a “golden handshake”. African and Caribbean countries becoming Independent between 1950-1962, which included Jamaica and Trinidad and Tobago, were offered this golden handshake aid package. Trinidad and Tobago, under premier/Prime Minister Dr Eric Williams, apparently, was the only country not to accept the golden handshake offered.

From the 1940s, Britain had given aid to its colonies through the Colonial Development and Welfare Fund (CDWF). Aid to the Caribbean territories from this fund came through the 1945 Moyne West India Commission Report recommendations. The Moyne Commission was dispatched to investigate the workers’ uprisings in the BWIs in 1938. The CDWF financed projects promoting development in the region. In Jamaica, projects were funded in agriculture, education, labour, and employment to establish the University of the West Indies (UWI) Mona campus, and to construct a cement plant (Rockfort), a sugar refinery (Monymusk), and the Mona Reservoir, among others.

With Jamaica to become independent on August 6, 1962, further aid to the territory was among the issues to be discussed and settled with Britain. The Independence Conference for Jamaica was held in London in February 1962 with the delegation led by Premier Norman Manley. At that time, Colonial Secretary, Reginald Maudling, commented on Jamaica’s phenomenal economic growth in the post-war period. Jamaica’s per capita income was then £157 (population - 1.6 million), one of the highest among the African/Caribbean territories, and the future prospects looked bright.

Following the general election in April 1962, the new premier, Sir Alexander Bustamante, led a delegation to London for further discussions on economic, technical, and defence assistance to Jamaica. It was felt that this assistance was critical. Considering that Britain’s development assistance package to African countries was £20 million and more, the Jamaican delegation expected to get a significant package of grants/loans amounting to about £15 million.

The Gleaner reported that the Jamaican delegation returned with a handshake, which was not so golden. Britain felt that it had to give more to the larger African colonies with less favourable economic situations than the two Caribbean countries.

The Jamaican delegation had accepted a package, which included a loan of £1.25 million; a grant through the CDWF of £1.10 million; and military properties and installations of £2.50 million. So in total, Jamaica got £4.85 million.

It is noted from the Hansard of the British Parliament that in budget year 1964/-65, the British Government, among other things, converted the loan from the CDWF, totalling £565,500, for construction of the Mona Reservoir, to a grant. A sum of £1.25 million would be made in loans for housing projects through the Commonwealth Development Corporation. These seem to be the disbursement of the golden handshake.

It appears that an additional £1 million (supplementary capital sanctions) was also approved for housing projects. It is recorded in Hansard that all these allocated funds excluded British technical assistance for Jamaica and financial assistance to the UWI.

At independence, there was a parting discussion between Britain and Jamaica on economic assistance.

Jamaica, as an independent country, has continued to receive bilateral economic development assistance from Britain, and from 1975, following Britain’s membership of the European Economic Community in 1973, Jamaica also received grant development aid through the European Development Fund under the ACP/EC Lomé Conventions and the Cotonou Partnership Agreement.