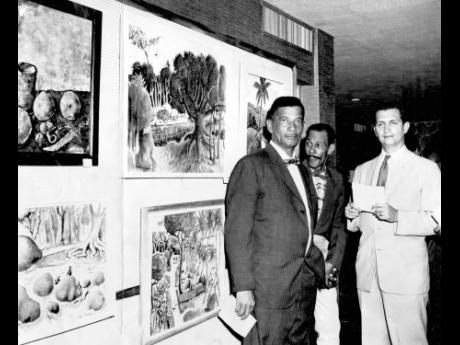 Gleaner Archives
In this 1963 photo, Carl Abrahams exhibition of paintings inaugurated by Edward Seaga, then minister of development and welfare (right) at the Sheraton Kingston Hotel. At centre is Carl Abrahams and left Sir John Mordecai, one of the trustees of a scholarship fund for Jamaican artists to be launched from proceeds of the Gallery of Jamaican Art at the Hotel.

Sir John Stanley Mordecai, 1903-1986, was an exemplary civil servant at the national and regional levels. He was a senior executive engaged in the establishment of the West Indies Federation, 1952-1962. It was said that Sir John always strived for excellence in everything he did.

Mordecai was born in Kingston on October 21, 1903, the son of Sigismund Theophilus Mordecai, a tobacconist, and his wife, Marie Adina Smith. He had an older brother, Jabez Theophilus, born in 1900.

He entered the civil service in 1920 as a clerk and was employed in the Treasury Department up to 1942. He was secretary to the War Risk Insurance Board, 1942-1943.

John Mordecai was awarded a Government Scholarship and studied at Syracuse University in New York state, earning a degree in public administration.

Thereafter, he was appointed assistant island treasurer and given responsibility for special projects, including the Mona Reservoir scheme. He later became trade administrator, 1948-1950.

From there, he was seconded to the Colonial Office in London, 1950-1952, and then went on to serve as secretary-general of the West Indies Regional Economic Committee, which did the preparatory work for establishing the West Indies Federation from 1952-58. He was appointed federal secretary and was the chief official when the federal government was established in 1958. From 1961-62, he was deputy federal governor general. He was knighted in 1956.

The WI Federation was dissolved in 1962 after Jamaica voted in a 1961 referendum to leave.

In the aftermath, Sir John received a fellowship to Princeton University to examine the break-up of the West Indies Federation. He wrote a book, The West Indies: The Federal Negotiations, and several journal articles on the Federation.

Returning to Jamaica, he was always busy. He was general manager of the Jamaica Industrial Development Corporation, 1962-1963; Chairman of the Public Service Commission, 1963-1964, Chairman of the Sugar Commission of Inquiry, 1966-68; and Director of the UWI Planning Unit until 1971. It is not clear if Sir John ever formally retired.

He was an avid sportsman who had a keen interest in cricket, which he played as a member of the Kensington Cricket Club. Sir John was a horseracing aficionado and was a founding member and a chairman of the Jamaica Racing Commission. He was described as the complete racing man and was associated with the sport as an owner and administrator for over 50 years. He was admitted to the Thoroughbred Hall of Fame.

He had also played billiards competitively.

On April 10, 1951, John Mordecai married for the second time to Phyllis Walcott, who had attended St Hilda’s and was a food control officer at the Office of the Trade Administrator. They had a son, Jeffrey, now an attorney-at-law, who also attended Wolmer’s and was a very good cricketer. Lady Mordecai died in August 2001.

Though Sir John Mordecai and his family were Christians, the Mordecais in Jamaica were most likely of Jewish origin.