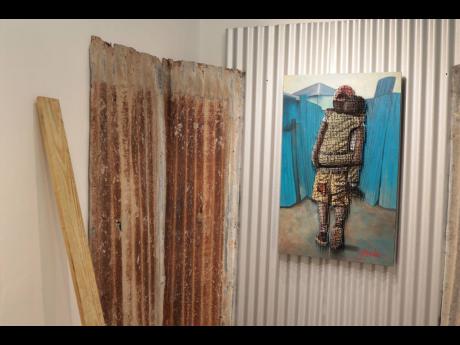 Contributed
Gavin Jordan’s creation - One step at a time 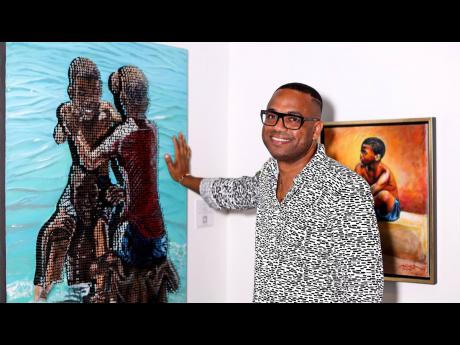 Contributed
Self-taught artist Gavin Jordan with his artwork at a recently concluded exhibition at The Sky Gallery.
1
2

On November 19, Gavin Jordan debuted Moments in Time, his first solo art exhibition at The Sky Gallery. The artworks were a captivating display – a confluence of perceptual art and traditional oil painting with a three-dimensional twist.

Jordan, a self-taught artist, calls his style of perceptual art sculptured paintings. He focuses on the human figure, which he tries to bring to life. Each painting is constructed with thousands of screws that are strategically placed at different positions and spatial depth in order to put a spotlight on the central figure or figures in each piece. Inspired by the works of Pablo Picasso, Michael Murphy, Peter Terrin, and Marcus Levine, the works can be classified as a mix of modern impressionism, pointillism, and perceptual art. Each painting, Jordan says, conveys a sense of realism and movement, capturing figures in motion and bringing a sense of joy and happiness to the collector.

“‘Moments in Time’ is a poignant expression of everyday scenes and memories from the past, creating a feeling of nostalgia and wonder. The exhibition aims to transport viewers to an emotional and imaginary place, causing them to look beyond what is on the surface and understand another side of the story,” he said.

In producing these works, Gavin travels around with a camera, taking photos of people and settings that capture his attention. He may also draw inspiration from photos or memories of his past. Once an image is selected, he captures it in a sketch and locates the human subject that will be the focus of the three-dimensional element.

The rest of the process he developed himself. It involves the use of thousands of industrial dry wall screws, which are drilled into the canvas on board in a grid pattern created for the subject of the piece. Each screw is carefully placed at a spatial depth through a process Gavin refers to as sculpting. This renders different dimensions of shadow and light, based on the angle from which the piece is viewed. Once the screws are installed, he begins the painstaking process of painting on top of each screw to bring the image to life.

He uses oil paint to finish the artwork. Due to the details that go into the pieces, one piece of art can take several weeks to complete. He still works 9 to 5 and puts on his artist’s cap after work hours. Jordan says he utilises whatever free time he can get – in the evenings when he can, weekends, and outside of his regular office hours.

Jordan says his natural talent was evident at an early age, with compatriots from primary and high school remembering him as “always drawing and sketching’”and doing well at art in class. He completed studies in art at the CXC level before going on to study accounting and economics at university. What followed was a corporate career for the next 20 years – he did not do any art during that time.

In 2016, impacted by professional rigours, Jordan picked up a sketch pad and paint brush and started drawing. He has not looked back. “Art is how he makes sense of the world,” he said.

Since then, he has spent much time perfecting his unique style and exploring different methods and media. He has worked with acrylic on canvas, pallet knife, oils on canvas, and most recently, experimented with the use of screws, in his interpretation and own brand of perceptual art.