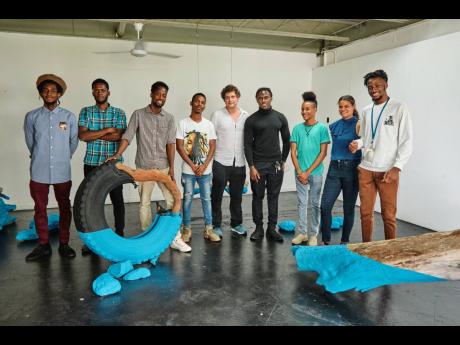 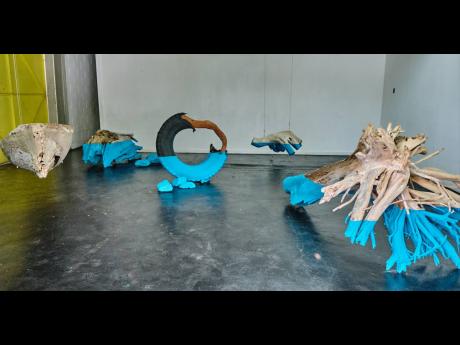 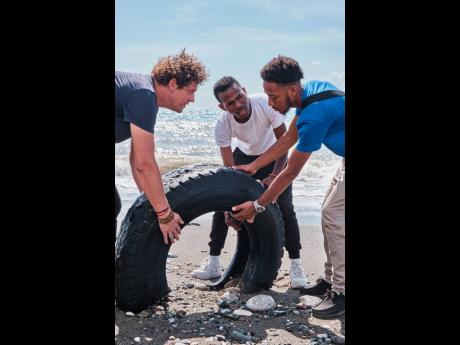 Contributed
(From left): Stephane, Thidet, and Reginald pick up a tyre at a beach in Bull Bay where they selected drift wood and other objects for their art installation. 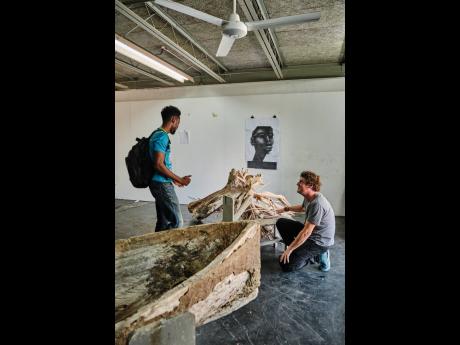 Following up on ‘The Fabric of Being” interactive art installation at the Edna Manley School of the Visual and Performing Arts, the RUBiS InPulse Art Project upped the ante with an expansive Collaborative Art Installation. The one-day exhibition took place on campus on November 25.

Led by French artist Stéphane Thidet on his first trip to Jamaica, the exhibition, titled “Staying Afloat”, marked the culmination of hands-on student workshops. Thidet shared some of his techniques of carving into and painting leather with students. Unconfined to the classrooms, the young artists and their guide embarked on a journey to collect driftwood from Bull Bay in St Thomas.

“We selected interesting pieces of wood that upon reflection, echoed human scale and were biomorphic. These fragments of the landscapes were already transformed by nature, but we wanted to use them in a way that unified us as a collective. We transported each piece from the beach and decided to create an implied sea level on to the objects using the art school benches.” Thidet said.

Based in Paris, Thidet’s work centres around the ideas of the transience of the elements and of using objects as a source of both resistance and reconstruction. His art features in many public and private collections. His work has been exhibited in La Maison Rouge, the Palais de Tokyo, and in numerous modern-art galleries internationally and now in Jamaica.

“The students learned a new way of working, to create something new from something else,” he said. RUBiS InPulse Art Project Coordinator and artist Camille Chedda concurred, adding, “By conceptualising from scratch, the students learned to transform an object to bring new meaning.”

Redji grew up in a district of downtown Port-au-Prince, near the artists and cabinet makers of the Grand-Rue. In 2010, he joined Atis Rezistans, a community of artists specialising in salvage sculpture, reclaiming discarded objects for art. Since 2011, Redji has participated in several editions of the Ghetto Biennale of Port-au-Prince.

Building on themes of reconstruction and reclaiming, the student cohort collaborated with Thidet, Senatus, and Chedda to create the exhibition which, as Thidet added, “drew allusions to Jamaica’s current situation in the context of migration, climate change, and the histories embedded in the Caribbean Sea. Each sculpture also demonstrates how humans can accomplish the seemingly impossible. If we cannot swim, we can fly. Each object has a fundamental connection with the others in that they are all struggling to stay afloat.”