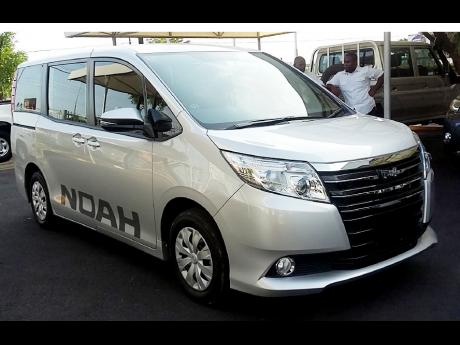 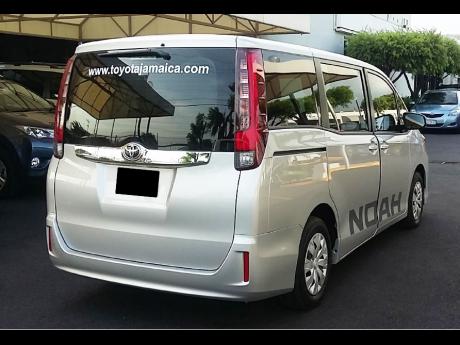 Contributed
The 2016 Toyota Noah has large windows all around, making for a great view from the inside. 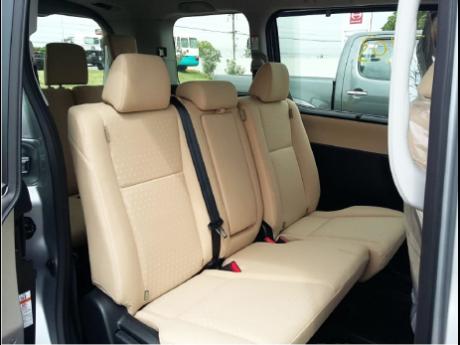 Contributed
The second row of seats. Toyota Jamaica provides black seat covers for those who do not like the light look. 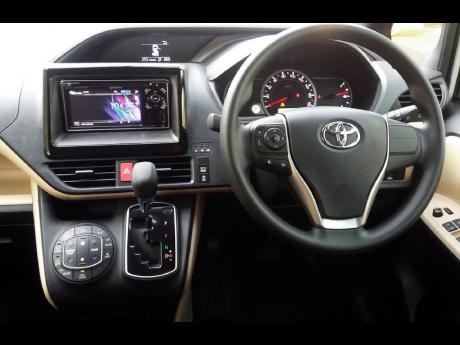 Contributed
Steering-mounted controls and dual air-conditioning are part of the Noah's creature comforts. 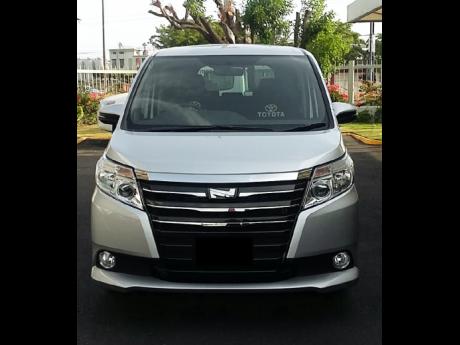 Before getting into the tale of the new Toyota Noah, there is one difference from the images which needs to be noted - those light-coloured seats are covered in black by the company at the purchaser's discretion. If my tastes, dubious as they are, and the high passenger traffic that a many-people seater naturally encourages, are anything to go by, not many will choose to see the original seats. Ok, on to other Noah matters.

Toyota Jamaica's introduction of the Noah, starting with the 2016 model, is the reverse of the accustomed trend in Jamaica's new- and used-vehicle market. The standard story is that a new-car dealer brings in a model that catches the eye of the public but, in 'plastic pon seat' state, is way above the wallet of the majority of the population.

So a used-car dealer ships in some models at a significantly lower price and they start to be seen on the streets (which means that the vehicle loses some of the prestige which comes with rare sightings).

Additionally, the used import may be a domestic market model, so the names differ enough to be noticeable. A classic current example is the Mazda 2 and Mazda Demio hatchbacks, the former sold by the new vehicle and the latter imported by several used-car sellers, with one in particular carving out a stronghold in the market.

Now comes the Noah, the same name as the second-hand imports which preceded it on the market. But this Noah does not have ancient, ark-like qualities. It is one nicely equipped, nifty people-mover and pretty fuel-efficient, too.

There are certain essentials for a pickney wagon or a toter of multiple adults and the Noah ticks numerous boxes. Dual air-conditioning for not only the front and rear, but also separate settings for the driver and passenger in the co-pilot's seat. Lots of cup holders and storage spaces for the little items which are an inherent to moving many bodies around. (These include a pull-out dual cup holder below the gear lever which easily converts from round to accommodate a rectangular base. Electric sliding door on the left side, towards the kerb. (Make that both doors for the higher grade model, which also has a dual sunroof).

The bells, whistles, buttons and Bluetooth continue with push button start, stability control, start-stop technology (which increases fuel efficiency by shutting down the engine at extended stops with a firm foot on the brake pedal) and eco mode, for ever greater 90 octane savings. We could go on and on with the brochure contents, but how does this amalgamation of parts and good family intentions drive?

Very well. I expected some top heaviness, what with the high roofline, but making the left turn from Caymanas on to Mandela Highway did not show evidence of the dreaded 'tippiness'. Not that I tried to move it like a corner hugger, which it obviously is not. But lane changes were easily effected (look Ma, one hand!) and acceleration brisk. Note, though, that this was with four persons in the Noah. Some performance reduction is normal with a full load, plus gear.

The highway construction people generously made a small part of the route a journey on to the rougher side of the road. I experienced it as a passenger and driver. Both were very tolerable, being at the helm more so than sitting in the second row of seats. From that second row, though, I had the good experience of the Noah's wide expanse of window (which comes with a privacy shade). High roofline and deep window well combine to give a great view of the surroundings and I can only imagine what it would be like combined with the dual sunroof.

Are there any drawbacks to the new Noah? I am a fan of fold flat seats, which create a cavern of space in a hatchback. The Noah's last row of seats flips sideways and up, leaving lots of floor space, but I am a fold flat kind of fella. It is not a cute car by any stretch of the imagination, but neither does functionality mean flat or even ugly.

Now, how much does all this cost, reverse camera capability (the screen is ready, you can acquire the camera and hook up) and all cost? As briefly tested, $4,896,292 at full duty and, at 20% duty concession, $3,915,358. The higher spec model is a smidgen higher, the extras including a body kit in addition to the dual sunroof mentioned earlier.

In the package is a full tank of gas (the fuel economy on the engine which is shared with the top-selling RAV-4), vehicle tracker and a year's free service, plus a free servicing arrangement up to a stated distance/time point.

Is it worth it? Ultimately, that is for the buyer to decide. But in this case, said buyer has the used-car market to turn to for cheaper, but far less equipped models. The bells, whistles, buttons and, of course, wallets, will have a lot of say in the final choice.