A drive for outstanding sprinter 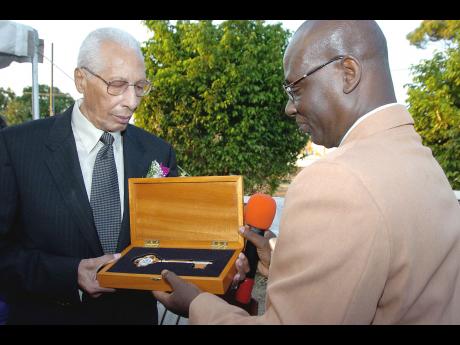 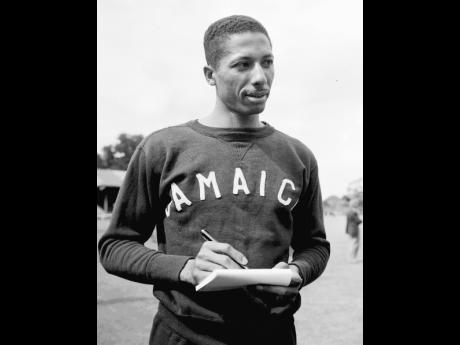 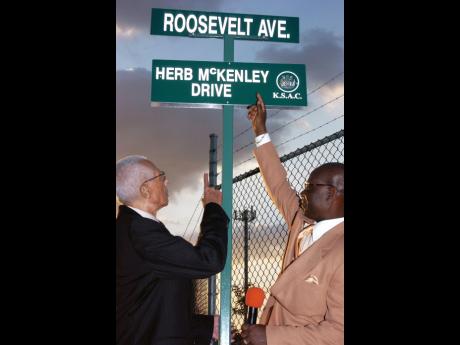 Herb Mckenley (left) and Desmond McKenzie look up at the street sign with McKenley's name in 2004.Ian Allen /Staff PhotographerHerb McKenley was honoured with the Key to the City and the renaming of Roosevelt Avenue to Herb McKenley Drive. 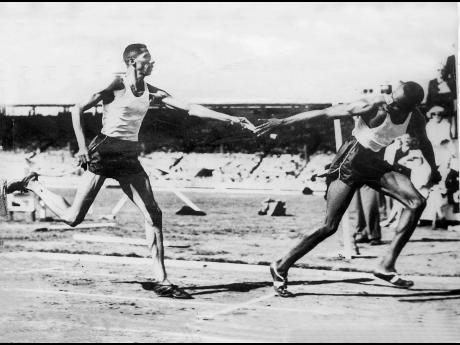 Herb McKenley passing the baton to George Rhoden in the famous relay at the Helsinki Olympic Games in July, 1952, in which the Jamaica team won in World and Olympic record time.
1
2
3
4

Today, Automotives starts a series about some of the persons for whom roads are named in Jamaica. Some may have been forgotten while, in other cases, a reminder about the achievements of the person whose name is on the street sign is appropriate. Befitting the World Championships season, we start with athlete Herb McKenley.

In November 2004, Roosevelt Drive in St Andrew was renamed Herb McKenley Drive, in honour of the outstanding Jamaican track athlete who was on hand to see the sign bearing his name unveiled as well as receive the keys to the city of Kingston. In that same year, McKenley was awarded the Order of Merit.

Appropriately, the road is not only very near to the National Stadium, but also connects at one end to Arthur Wint Drive - reminiscent of how, in Helsinki, Finland in 1952, McKenley and Wint were on the Jamaican men's 4 x 100m team which struck gold in an Olympic and World Record time of 3.03.09. McKenley's leg was timed at a remarkable 44:06. Others on the team were George Rhoden and Les Laing.

His 400m silver was a repeat of the London Olympics of 1948, where McKenley was

second to Wint - although it was Herb who had set a world record of 46.0 shortly before those games. Ironically, Jamaica's 4 x 400m hopes were dashed when Wint pulled a muscle in the final.

McKenley had been a standout for Calabar High, although being beaten often by Leroy Brown of Wolmer's Boys. At the University of Illinois, which he attended in 1945, McKenley won the NCAA and AAU championships, posting world best times at the 100m, 200m and 400m in 1947, a feat yet to be repeated.

He went on to be coach and administrator, heading the Jamaica Amateur Athletic Association (JAAA).

Herb McKenley died on November 26, 2007, almost three years to the day after the road was officially named for him. His significance to Calabar High School was reinforced by his body being carried there as part of his send-off.

McKenley was buried at National Heroes Park, after an official funeral service.