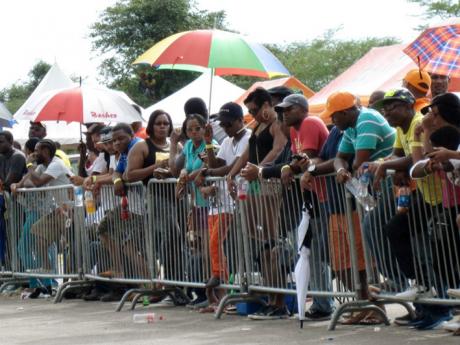 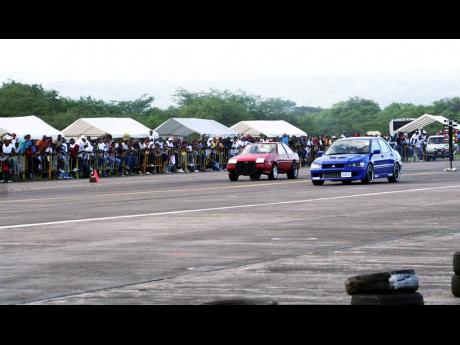 The second-highest-ever number of drag racers - 154 - descended on Vernamfield, Clarendon, last Sunday for the NDRC Drag Challenge #4. Highlights of the meet included the close going of the Super Street 15; pedal to metal action in Pro Street 13 and the duel to the death of Pro Race 9.

In the Street 16 Left Lane, Davin Virgo continued his dominance of the class in his Toyota Hiace bus, winning in 16.336 seconds over Kenroy Richards in his Honda Logo in 16.709 seconds.

Marcelle Coomarsingh in his low-slung Suzuki Samurai won a close race in the Super Street 15 with a time of 15.653 seconds over Damion Spence in his Toyota Levin, who did 15.53 seconds. In the Pro Street 13, there was a pedal to metal, ding-dong battle between Stanley Powell in a Toyota Starlet and Noel Rhone in a Lancer Evolution 3. In the end only, thee-tenths of a second separated the two, Powell winning in 13.434 seconds over Rhone, with 13.724 seconds.

The battle of the Subarus in Pro Modified 11 saw Ian Galbraith (11.796 secs) putting on nearly a full second over Peter Matthews (12.747secs). There was also the battle of the Civics in Pro Modified 10. Kenneth Timoll in an all motor 2.4 L trouncing Xavia Murray in 10.708 seconds, Timoll left Murray dead at the start line, after which Murray could only limp home in 31.416 seconds.

Probably the biggest, most anticipated race of the day was the Pro Race 9. Jody Jervis in his R33 Nissan Skyline had been laying down merciless times all day, decimating all before him. In the process he had set and broken the track record for six-cylinder rear-wheel drive cars twice.

Excitement reached fever pitch as the cars roared and snorted at the start line. Jervis blasted away on the green light, leaving for dead Craig Lue in his much feared Mitsubishi Evolution. At just over the half-way mark the R32 was going full blast when it produced a telltale white cloud of smoke, leaving Craig Lue to hold his nerve for a famous win,

The full results are: