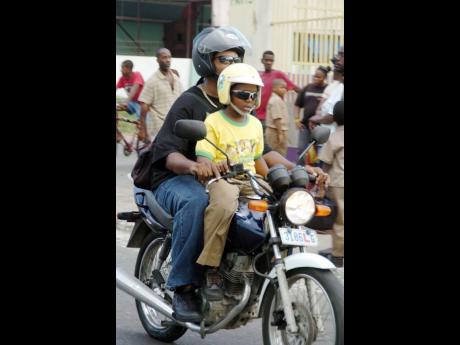 File
A motorcycle helmet being worn with the chin strap in place. 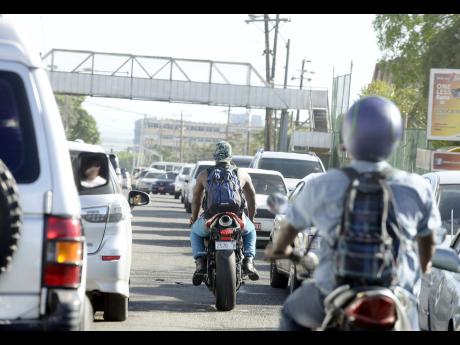 Gladstone Taylor
One motorcyclist is wearing a helmet, while the other is not. 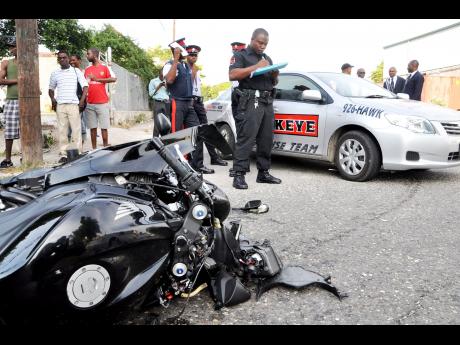 File
Information being gathered at the scene of a crash involving a motorcycle on East Street, Kingston, in January 2015. 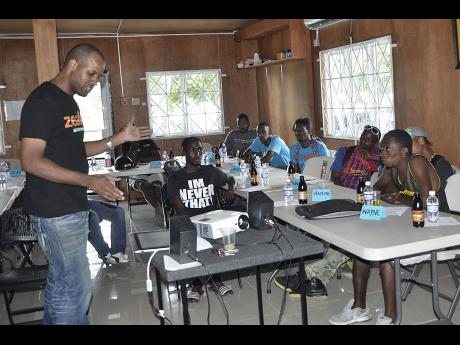 Tarik Kiddoe, who hopes to generate more traction for the Back to Basics Motorcycle Safety Workshop series that he has started, is all too aware of the spike in fatalities from crashes involving motorcyclists. Although Kiddoe can claim no deaths among workshop participants, as well as the Shango Bikers riding group of which he is a part, the National Road Safety Council's (NRSC) figures show a 112 per cent leap in motorcyclists' deaths from 2014 to 2015.

However, Kiddoe believes there was class bias at play in the previous level of attention paid to motorcyclists dying as most are from the lower socio-economic strata. In addition, he points out that there is an inadequate legal framework for motorcyclists.

Kiddoe said, "Motorcyclists are allowed to 'learn to ride' on our roads with absolutely no licensed driver present to offer guidance. By current road-safety standards, that is insane! If any group of people driving trucks, cars, or any other mode of transport was allowed to do this, the result would be mayhem. We should not be surprised to see mayhem as the result for motorcyclists."

With not wearing a helmet or doing so improperly a major problem, Kiddoe recommends that "the new Road Traffic Act should include a specific lesser offence - "helmet not properly affixed". While fines applied may be lower, points deducted should be the "same as not having a helmet at all".

Among his other recommendations is mandatory third-party training for motorcyclists, which would be an improvement on and replacement for the Island Traffic Authority's yard test done at an examination depot.

Kiddoe said about 50 per cent of his biking group members have the appropriate licence and the others are being encouraged to go through the process of getting one. "We ride as big men. We not into the running from police," Kiddoe said.

He concedes that the police will get tired of prosecuting riders for the same offence repeatedly, with no behavioural change.

However, Kiddoe also points out the responsibility of other road users to motorcyclists, asserting that in 80 per cent of crashes involving cars and motorcyclists, "the driver did not see the rider". He describes a 'hook collision', where a car turns into the path of a motorcyclist approaching it from behind.

"The rule of the road is that we should look out for each other," Kiddoe said.