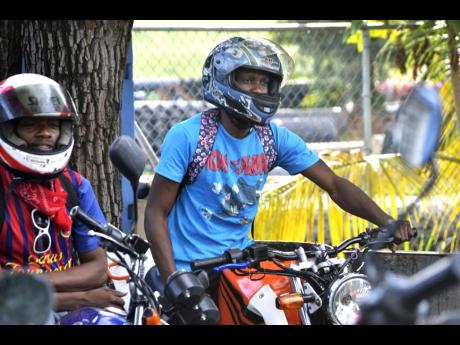 Contributed
A participant in a Back to Basics Motorcycle Safety Workshop. 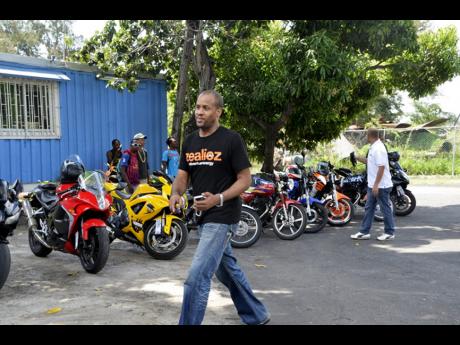 Contributed
Tarik Kiddoe and workshop participants get ready for a hands-on exercise in the Back to Basics Motorcycle Safety Workshop. 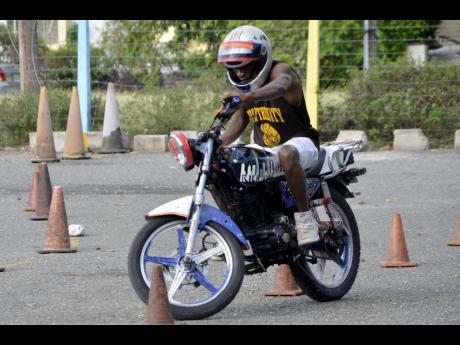 Contrbuted
A motorcyclist navigating the course during the practical segment of a Back to Basics Motorcycle Safety Workshop. 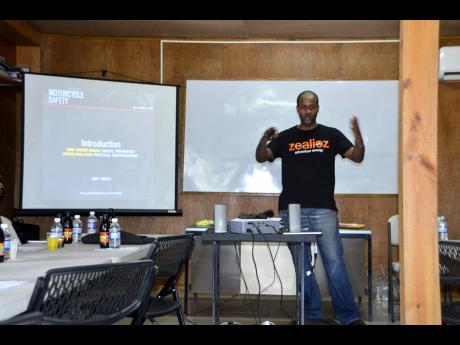 Contributed
Tarik Kiddoe of the Back to Basics Motorcycle Safety Workshop making a presentation during a training session.
1
2
3
4

Tarik Kiddoe, organiser of the Back to Basics Motorcycle Safety Workshop, is happy with the recent expression of support given to the Jamaican programme by US-based motorcycle safety expert Keith Code. "He showed support for the process of where people learn to ride and about the technology behind the motorcycle," Kiddoe said.

Code, author of the book Twist of the Wrist: The Motorcycle Roadracers Handbook and A Twist of the Wrist Vol. 2: The Basics of High-Performance Motorcycle, operator of the California Superbike School, is featured in a video posted on the workshop's Facebook page. In it, Code says, "The days of learning to ride by feel are really quite past. It is time that riders understood the actual technology underneath, the actual true basics, the fundamental skills of riding a motorcycle.... I am here to show support for the Back to Basics Motorcycle Safety Workshops..."

He encouraged all the riders in Jamaica to attend the workshops, as "you are only really truly as safe as much as you understand the core fundamentals of riding a motorcycle.... I hope these workshops are very valuable to you and you will spread the word."

Videos have been a part of connecting Code with the series, as the motorcycle safety expert's audiovisuals have been referenced for Back to Basics workshops for about three years. Now, Kiddoe is hoping that it will be possible to redo some of the videos to have Jamaican content.

"When you are speaking to local people, you want local faces and talent," Kiddoe said.

If the relationship progresses as Kiddoe intends, Code and his team will see the local faces and observe the programme in action.

"We plan to get him into Jamaica," Kiddoe said. We are working on it, to get them to look at the programme. He has seen the curriculum. We want him to see it in action and say how we can adjust it."

With Code involved in motorcycle racing, Kiddoe has another goal, which is to access opportunities for Jamaican riders who want to channel their passion in that direction. However, as much as he hopes for a productive connection with Code, Kiddoe is not losing sight of what he has already done in Jamaica and is committed to developing.

"In the meantime, we are focused on our project, just to teach people the strategies to keep them safe," Kiddoe said.

Still, he said that in speaking with Code, it became clearer that the high level of motorcycle accidents in Jamaica is part of an international problem.

Western Jamaica has become notorious for motorcycle accidents, and the most recent Back to Basics Motorcycle Safety Workshop was held in Negril on September 4. Kiddoe is pleased with the outcome, describing a situation of increasing trust.

"When we started we had about seven people in the room," he said. However, by the time early participants started, calling other riders, letting them know there was nothing to fear from the police (who were present) and that the facilitators were knowledgeable the numbers ballooned.

They ended up with 27 workshop participants. Then after an organised group ride, another 24 were attracted to the programme and signed up for the next Negril workshop. Kiddoe plans to have it before the end of November, ahead of the high traffic Christmas season.

Kiddoe said those who have participated go out and are advocates for Back to Basics. "You can see it in their faces," he said.