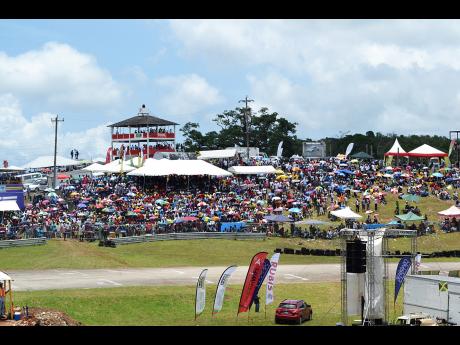 The 2016 lamaica Race Drivers Club (JRDC) race series comes to a close on Heroes Day tomorrow. Meet director Monique Gibbs says the meet "... is one of the biggest meets of the year as the competitors are always eager to secure their championships."

The anticipation is high, especially in the signature Thundersport class. The races have been hot all year, with a tight three-way battle at the top and the other drivers having a lot to say, according to Gibbs.

"The 'Tremor Trio' of Doug, David, and Kyle gave us hot, close racing at the August race meet. This Heroes Monday, it is going to be even more heated as Peter Rae and Charles Chen are coming to dethrone the top three competitors in the class," she said.

All the drivers contacted say they have made changes and will be stepping up their game. Peter 'Zoom Zoom' Rae missed the August meet with his Mazda RX 7 but believes his reliability issues and lack of power are things of the past. "We did a transplant since the last Dover. It's a rebuilt motor with bigger displacement. We've laid down three test sessions and I must tell you I am pleased, and the fans will be," Rae said.

'King' David Summerbell recalls that he had tough luck in the August meet but has made the changes and says that while the other big dogs will be barking he will be looking to silence them. "Everybody has been pushing hard to go faster. For my part, we've put in some better brakes and a brand-new suspension after ditching the one we've had for 10 years," Summerbell said.

"The goal is to go a lot faster. We've been running in the mid 1:17s. We want to take that down to 1:17 lows. We want to go for the track record and we think we can do it because the car has been strong and reliable," he warned.

Kyle Gregg in the #404 Radical RXC is 12 points off the lead for the Thundersport Championship. He says the rear-wheel drive is a little trickier, leaving him with handling issues. All season long, the Radical has been running medium-compound Dunlop tyres; Gregg is going for the soft compound Yokohamas this time around, same as Summerbell; and Doug Gore and he expect to be going a lot faster if he puts a perfect set of races together.

"It's between myself and Doug right now. I really didn't expect to be in this position in my first year with the Radical in Thundersport 2. We're still diagnosing the car in terms of strengths and weaknesses, but if everything comes together on Monday, I'm going to gun for it," Gregg said.

Doug Gore, driving his Audi TT DTM, is flying in a specialist from halfway around the world to extract more power out of the beast he is handling. "We have a tuner coming in from the Czech Republic. He's promising to give us a whole lot more power, plus for the first time in over five years, we put the car on the alignment stand and found some very interesting things. We're very confident about Monday," Gore said

Gibbs says a special place will be on the programme for a former Gleaner journalist. "This race meet we will honour Glenroy Sinclair in the biggest race of the day, the last race event, for his outstanding contribution to motor sport, and specifically, Dover Raceway. He is truly missed," Gibbs said

In between the car races will be the motorcycle racing, with about 20 riders competing. They include show stoppers like Robert McDonald, Linton Martin, Gregg 'Tallman' Cross, Kyle Reynolds, and AndrÈ Rickards.