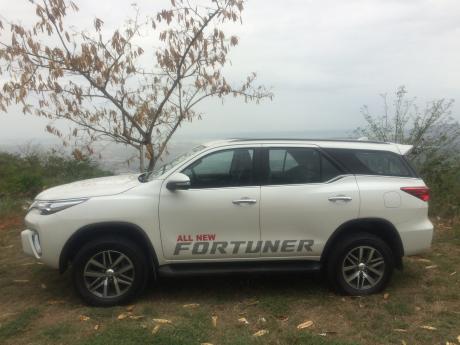 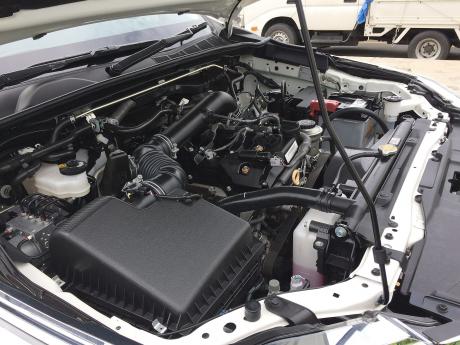 The 2017 Fortuner SRV comes with fresh, sleeker styling, benefiting from a recent generation change in the latest line-up of Toyota SUVs. The front of the SUV is horizontally narrower but with lengthened Bi-Beam LED projector headlights, wrapping around deep into its fenders, with daytime-running LED lights.

The chrome grille blends into the chrome garnish on the top of the headlights and narrows as it reaches the front bumper. The large projector fog lights on the front bumper are also tastefully embellished with chrome.

The wing-like LED rear lights connect to the familiar chrome Fortuner embellishment in the rear centre. The rear cargo side windows also seem to stylishly wrap around the rear tailgate glass and spoiler. The look is completed with 18-inch alloy wheels.

The interior of the Fortuner has been as freshly updated as its exterior with what seems to be a business-luxury theme. It has leather accents on some parts of the dashboard and narrow top-centre air vents that are consistent with some of its exterior features.

The two-tone black vinyl with brown leather pieces stitched in contrasting white thread on the dash complements the wood grain look of the shifter console and leather steering wheel. The door cards also have the two-tone look, surrounding the white-stitched brown leather front and rear seats, which are as attractive as they are comfortable.

Rear passengers have control of their air flow from the air-conditioning system, which gets rather cold in rainy conditions. Behind the back seats in the cargo area are two more folding seats to increase seating capacity from five to seven, which can be accessed through the back seats or the powered tailgate.

The centre console, with radio and air-condition controls, is nicely wrapped between padded brown leather and silver housing. The OEM Toyota radio has a USB and an auxiliary input, in addition to Bluetooth connectivity.

The sound quality and connectivity is good, and the stylish tweeters affixed to the door are functional in delivering their sound. The rear-view camera screen is in the rear-view mirror, as opposed to the centre console, which means that the view area is a bit small.

The gauge cluster has also been revised with a 4.2-inch colour multi-information display bordered with two blue vertical lights between the tachometer and the speedometer, whose needles are also lit up in blue.

The ride in the Fortuner is a little on the firm side, but one can still approach and drive over bumpy terrain and potholes without greatly disturbing passengers. Despite the test model being a two-wheel drive version, driving up and down winding hills in heavy rain did not cause any reason to worry, thanks to traction control and its supportive seats.

In Eco mode, the Fortuner is slower that in its normal mode as it tries its best to conserve fuel, limiting the driver to a more sluggish pace.The multi-information display also has an 'eco indicator' that scores the driver's fuel-conservation efforts in real time as a guide to help achieve better mileage.

However, in Power mode, the engine wakes up and responds nicely to its six-speed automatic transmission under a heavy throttle. Shifting in this mode actually sounds like the smooth changing of gears in a manual transmission rather than a conventional automatic transmission. A paddle shifter is there if you need more control and want to change the gears yourself.

The Fortuner seems to be a good buy for family-oriented professionals in need of more-than-average seating room, while tackling challenging local terrain and roads. Owners won't be left out with its fresh-updated styling inside and out, riding among other modern-styled vehicles on the road with confidence, in addition to having the proven quality and reliability of a Toyota to give peace of mind.