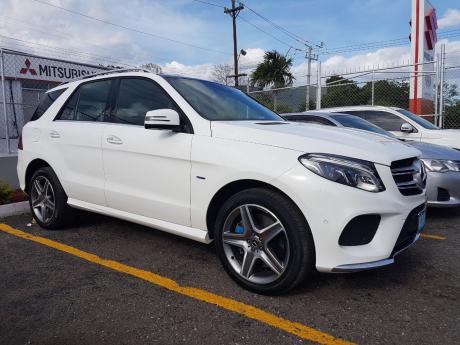 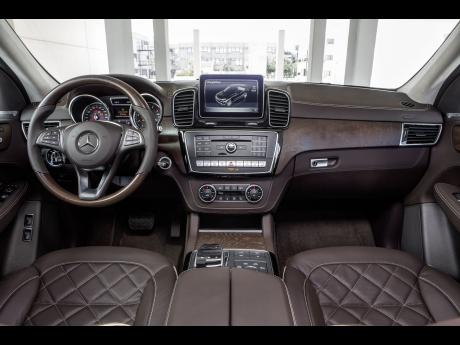 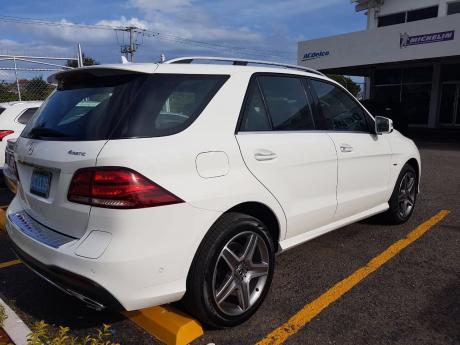 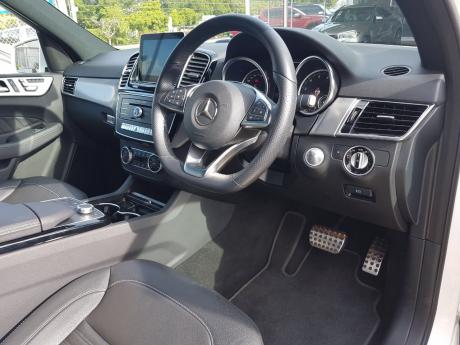 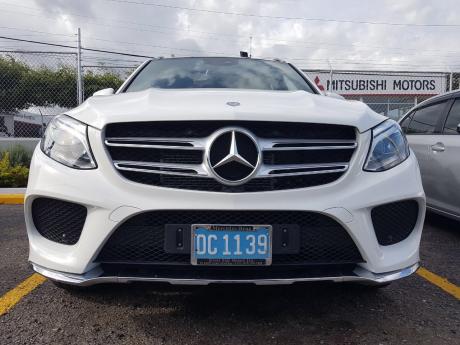 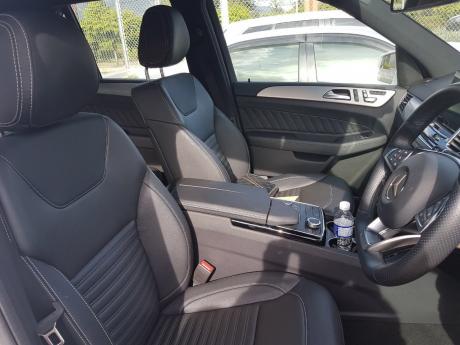 When you think of an older, plug-in hybrid technology vehicle, or an electrical vehicle (EV), you might consider it bland and unexciting.

However, the 2017 Mercedes GLE 500e Plug-in Hybrid, looks more like its performance-oriented AMG siblings rather than most other GLE models you may see on the road, having a similar body kit and AMG wheels.

The attractive blue ‘Plug-in hybrid’ plaque on the fenders, and its charging port in the rear bumper, are the only tell-tale signs of it being a hybrid. When opening the driver’s door you are greeted with a black sports-themed leather interior, stitched in white to match the exterior. It is also complemented by a thick flat-bottomed race-inspired paddle-shifter steering wheel.

At the base are sporty silver metal race-like gas and brake pedals to match the brushed steel accents on the door cards and dashboard.

While the rear of the vehicle is as attractive as the front, the rear hatch or luggage space is less spacious than other GLE models, to accommodate the electric motor’s batteries.

In Comfort mode, when pressing on the accelerator to initiate, you will not hear anything while moving off, as the electric motor works silently. The car will drive on its electric motor for a couple of minutes until the battery starts to go down a bit and soon after, the gas-powered engine turns on and takes over.

The transition between the two engines is very smooth, and can’t really be noticed unless you are looking for it as the gas engine is also quiet. The synergy of the two motors may make for a better alternative to start-stop technology found in conventional engine vehicles, which sometimes have a slight delay on start-up. Also, this can affect the air conditioning performance, causing the cabin to run a little warmer in traffic when the engine switches off.

The ride in the GLE 500e was impressive, as it dampened most of the rough terrain encountered on straights and corners. Its throttle response was very good, with what felt like a lot of instant power on tap.

High-performance manoeuvring can be executed easily, even more so in Sport mode which seems to lower and stiffen the vehicle a bit for more stability and better handling.

The feel of the steering also changed, stiffening and giving more feedback for a more enhanced driving experience. Touching the paddle-shifter puts the vehicle in manual mode where you choose the gears yourself but it will automatically go back to automatic shifting when not utilised after a few seconds.

The seven-speed transmission becomes far more aggressive than in Comfort mode, and propels the vehicle to higher speeds in no time. At this point, the 328hp 3-litre twin turbo gas engine combines with the 114 hp electric engine for a combined power output of 432 hp and 479ft/lbs of torque. The power delivery is linear, with no power surges or lag felt, allowing you to perform complex manoeuvres that may have been thought to be risky in more ordinary SUVs. After feeling the power and speed of the GLE 500e, driving it slowly actually felt awkward.

One also has the option of driving with just the electric motor by itself in E- Drive mode, which has a top speed of around 80 mph and a range of around 18 miles when the batteries are fully charged. If your daily drive is relatively short, one could drive on electric power daily without activating the gas-powered engine at all, by charging overnight.

Those with solar-powered homes in this case would benefit the most from this feature, lowering electric costs significantly, or removing them all together. Powering up the battery can be done via a 110v or 220v connector.

This seems to be a good compromise between performance and economy, pleasing both the most devout motor heads and tree huggers alike, as you can have all this fun knowing that you're leaving a smaller environmental footprint. Apparently this is Mercedes’ first attempt at a ‘plug in’ hybrid SUV, and man what an attempt it is. If this is the future of high performance engineering, the future is looking bright.

for comments or suggestions email us at autodrivegleaner@gmail.com