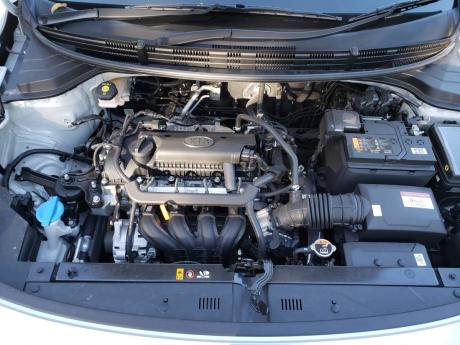 Even though the sedan market is shrinking, there is still hope for the subcompact market, which the Kia Rio is in. Its hatchback design is great, especially when the rear seats are folded down, giving the driver access to over 17.4 cu.ft. of cargo space.

The Rio is no stranger to the automotive market, having been around since 2000. it is now in its fourth generation. This model was first presented in 2016, and Kia made some obvious tweaks to better appeal to its customer base. The hatchback model is 15mm longer, 5mm wider and 5mm shorter in height than its predecessor.

The longer wheelbase gives it a more streamlined line look, which complements the chiselled edges for an overall sporty appearance. Ever since his major contributions at Audi, Kia chief design director Peter Schreyer has been on a mission to make the Korean brand more visually appealing. Subsequently, cars like the Rio have become heavily influenced by its European counterparts where design is concerned

Something subtle on the inside

The interior is simple and sufficient, which is intentional, based on the affordable price tag. This also means that things like steer-mounted multimedia controls and reverse cameras have been omitted. Nonetheless, there are sensors in the rear bumper that provide some consolation.

It’s much more spacious than most of its competitors, with 42.1” of leg room available for front-seat passenger and driver and 33.5” for rear-seat passengers. This means that if you have a six-foot frame and on the bulky side, you won’t feel cramped in this vehicle. The seats are also padded nicely to ensure there is no discomfort, especially on long journeys.

All-round visibility is very good, as the windows are huge, which will help the driver to see objects close to the vehicle. The central lock for the car is located in the centre console and not on the driver’s door, which was a bit awkward at first.

There are also some practical touches like the adjustable armrest and the huge cup holders in the door bins.

As is pertains to connectivity, there are USB and AUX ports to connect to multimedia devices. Once this is done, the info can be controlled on the infotainment system, which is basic but which gets everything done in an instinctive manner.

When I got the call that this car was available for a review, I was apprehensive at first, but then I was told that it was a manual, and I immediately said yes. Getting a manual from a dealer, in this day, is a rarity, regardless of country.

When driving the Kia Rio, think of it more as a domesticated car with an edge to it. The biggest plus about a car like this is its gas mileage as the 1.4-litre engine barely uses petrol, which is ideal for persons who are constantly on the road. The gear throws are a bit long, but very smooth, along with the overall mechanical feel of the vehicle.

It never felt like it was struggling or out of tune as I took it on rugged surfaces as well as up hills.

First gear can be found by moving the lever to the left, and to access reverse, an auxiliary part on the lever must be pulled up. This ensures that the driver does not access reverse by accident, which I think is very useful given that reverse is so close to first gear.

To ensure maximum fuel efficiency, there is an indicator in the dial cluster that shows the ideal gear the vehicle should be in. Not that I obeyed it as it would often come on at low RPMs.

Surprisingly, road noise was at a minimum as the engine trackled quietly, and the only thing I heard was the performance muffler. The same sentiment was shared for the suspension and handling of the vehicle. The low-profile 215mm tyres hugged the corners to ensure that there were no body rolls, and the 17” rims help the car to have a respectable ground clearance of 5.5”.

Regardless of the features it is lacking, this car is definitely bang for its money as it is multi-purpose and fuel efficient, which makes it a great domestic car.