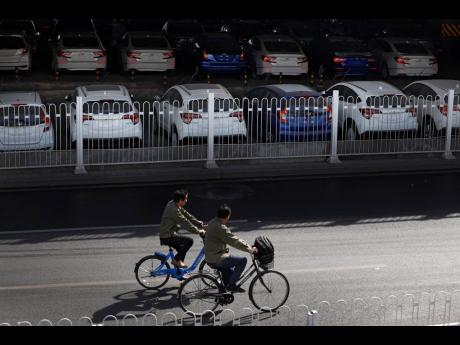 The Associated Press
People ride bicycles past new Honda cars stored underneath an overpass in Beijing on Thursday, March 14.

The downturn in China’s auto market worsened in January and February as an economic slowdown and a tariff fight with Washington chilled demand in the industry’s biggest global market.

The drop in sales of passenger cars in January was 15 per cent.

Economists and industrial analysts often combine the first two months of the year when looking at consumer activity to screen out the effect of the Lunar New Year holiday, when factories close for up to two weeks and commercial activity falls.

Chinese consumers are putting off big purchases amid an economic downturn that saw growth last year fall to a three-decade low of 6.6 per cent. Trade tension with Washington is fuelling consumer jitters.

The auto slump is squeezing revenue for global and Chinese automakers that are spending heavily to meet government targets to develop electric vehicles.

The downturn has prompted suggestions that Beijing will cut sales taxes or offer other incentives.

Sales by Chinese brands fell 23 per cent to 1.3 million units in January and February, according to CAAM. Market share for Chinese brands shrank by 3 per cent compared with the same time last year to 41.8 per cent.

Growth in sales of pure-electric and hybrid vehicles, which Beijing is promoting with subsidies, rose 98.9 per cent over a year ago to 148,000 units.