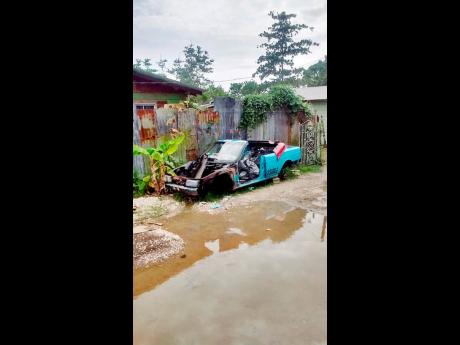 Contributed
The shell of what remains of Steven Thompson&apos;s old 1994 Nissan Sentra called &apos;Nissan Impossible&apos;. The car was destroyed in a fire earlier this year. 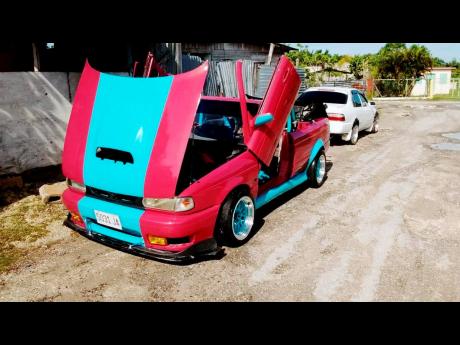 Contributed
The new and improved Nissan Impossible, created by Thompson after the previous customised Nissan Sentra he owned was destroyed by fire. 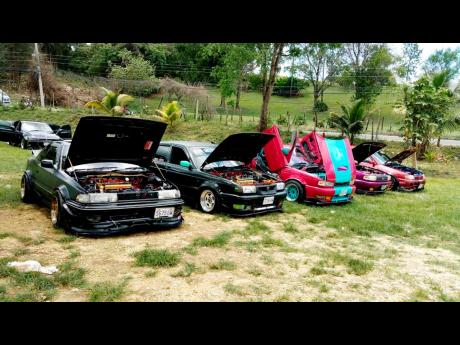 Steven Thompson and his Westmoreland-based car group, the Westside Hooligans are known for doing the seemingly impossible to regular everyday cars seen frequenting the streets of Jamaica. It is what has gained him the moniker ‘Mr Impossible’.

Thompson was last featured in The Sunday Gleaner in July last year for his work on one of his most prized possessions – ‘Nissan Impossible’. This is a 1994 Nissan Sentra (B13 chassis), which was given Lamborghini doors and a convertible top. The car had become a favourite in the local custom car scene by many who attend car shows, as well as on the Internet.

However, Nissan Impossible suffered tragedy earlier this year. One afternoon in February, Thompson was driving home with his mother in the front passenger seat. While passing the bus park in uptown Savannah-la-Mar, his mother said she noticed liquid dripping on her feet. Thompson described the events as unexpected.

“I was saying ‘But afta rain nah fall’,” Thompson told Automotives. “So when I pulled over now fi check it out, the fire just start to blaze. I didn’t have a fire extinguisher at the time. There was a vendor on the road selling snow cones, who had a jug of water. That’s what we used to put out the fire.”

Thompson said that one of the things that disappointed him most about the incident was how many eyewitnesses stood by watching the fire, but instead of offering help, they chose to record it on their cell phones. He said that the incident went viral so quickly that he even saw one of the videos just five minutes after extinguishing the fire.

“Trust me, it felt like all hope was lost because I’m saying ‘My God! The car is on fire and there’s no one to help. Everybody is just videoing’,” he said. “There were lots of people there, but everyone was just videoing. I don’t know how Jamaica got to this point, everybody just wants to video.

“At the moment, I was just too interested in putting the fire out to even think about that. So the first thing I did was to fly the bonnet and disconnect the battery. Then I was trying to figure out where I could get water or anything to help me put out the fire.”

Thompson said that although he felt all hope was lost, it was the words of encouragement from fans of the car on social media that motivated him to build another. The new Nissan Impossible looks very similar to the original one, but Thompson said that, unlike the previous version, built on just a regular B13 body, this version was done with the more powerful GTS Attesa four-wheel drive body.

Thompson is full of gratitude for his friends in Westside Hooligans who helped him rebuild the car.

“Financially, they helped and gave their support,” he said. “It was an expensive venture, but with the help of Westside Hooligans, we actually managed to get some things done very quickly. Some of them are mechanics, too, so everybody reached out and came together and helped.

“For the convertible parts of it, I shipped the top from Louisiana. It was taken off a convertible Toyota Celica. In less than two months, we came back with Nissan Impossible once again. Most people didn’t think it was possible to make this car.”

Now that Thompson has a newer version of the car, he is able to joke about the precautions he is taking to ensure he does not have another scare.

“With this one, I made sure I put two fire extinguishers in it, that’s step one,” he said with a laugh. “All the hoses from front to back, all the gas hoses were changed for genuine hoses.”

Thompson and his friends are hosting a car show today called The Return of the Impossible, where he will fully unveil the new Nissan Impossible to the local automotive fraternity.