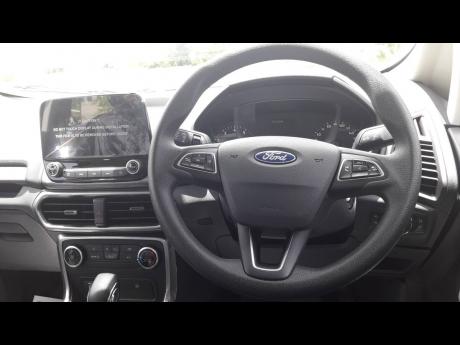 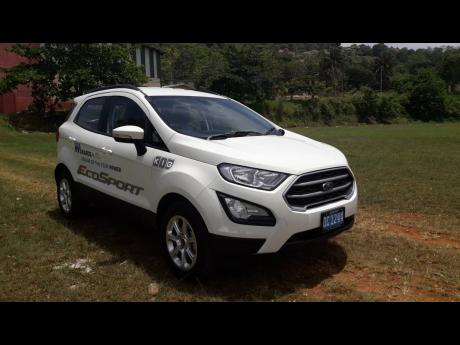 Kareem Latouche
The three-cylinders turbo-charged engine is no slouch. 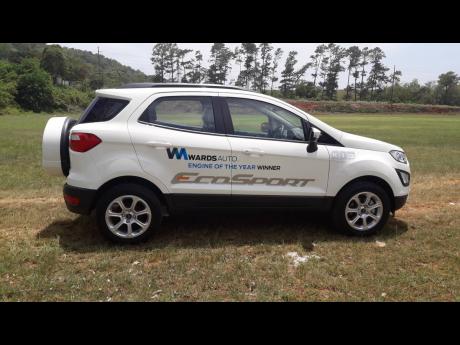 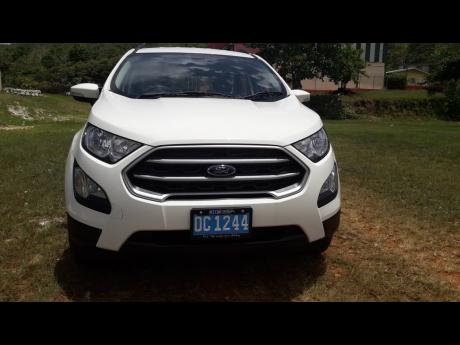 Kareem Latouche
The front of the vehicle share a similar resemblance to the Ford Fiesta and Focus. 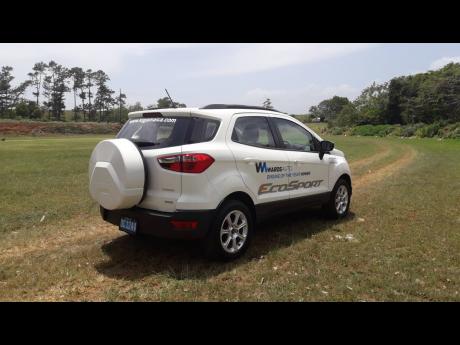 Kareem Latouche
Fortunately this model comes with a spare tyre mounted to the side-open rear door. 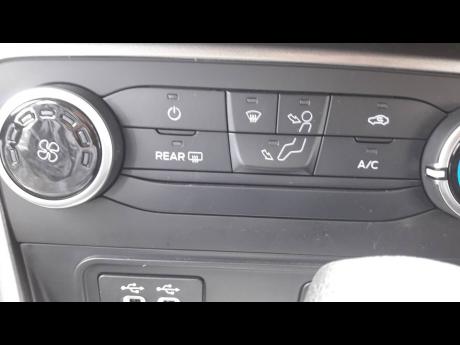 Kareem Latouche
The climate-control options are quite straight forward to use.
1
2
3
4
5
6

The first-generation EcoSport was designed by Ford Brazil Development Centre and went on sale in 2004. Now in its second generation, the EcoSport is based on the 2011 Ford Fiesta B2E platform, which means much of its dimensions are similar to those of a car.

The vehicle comes in three trim levels – Ambiente, Trend and Titanium – with the latter being the most premium version. The one I got to test was the Trend, which is covered in diamond white paint and has a leather-wrapped gear knob and steering wheel.

It’s clear Ford is aiming to stand out in the small SUV market with the EcoSport as they have decided to add some tweaks here and there to give drivers something extra. The most obvious is the ground clearance, which stands at an impressive 8.2” with 17-inch alloy wheels and is certainly much higher than its competitors. There is also the spear tyre on the back, which is a welcomed addition as it is noticeably absent from the American version. Many new cars are being manufactured without spares.

These two things make me know that Ford is thinking about practicality, which should be at the fore of anyone who is purchasing this vehicle. Its aesthetics is in keeping with the Fiesta and Ford Focus, and this is obvious by the custom Ford front grille and headlights that run into the side fenders.

With its already narrow width of six feet, which is good for getting in and out of tight spots, there are also power folding side mirrors, with embedded indicator lights.

What’s most impressive about this vehicle is the fuel economy delivered by Ford’s Ecoboost engine. It’s a1000cc three-cylinder turbo-charged engine, which delivers 170Nm of torque at 1500 - 4500rpm.

Around town, it’s more fuel efficient than the majority of vehicles on the street. While in bumper-to-bumper traffic for an entire day, I got an outstanding 31 mpg (13.158 km/l), which is great for parents or anyone who does heavy commuting.

As for the feel of the engine, it was peppy and responsive for the most part, with a little torque steer in the front wheels. Adding the turbo ensures that the driver can overtake when needed, by making the most of 123 hp the vehicle boast. Also the six-speed automatic transmission feels a lot more engaging than many of its CVT counterparts.

I was surprised with the handling of the vehicle, which shockingly did not show any signs of body roll when going around corners at moderate speeds. This most likely comes from the fact that it’s built on a car’s platform, as well as it has great weight distribution.

As for the suspension, there is adequate travel to absorb most bumps without feeling jerky. In addition, the electronically-assisted steering gives good feedback, especially around corners.

There is also Hill Launch Assist, which allows you to take your foot off the brake pedal and the vehicle will assist by holding the brake for three seconds. The innovative technology is also extended to the wipers, which can be controlled by sensor behind the rear-view mirror that can detect moisture on the windshield and automatically triggering the wipers

A view from the inside

Ford went with a two-toned interior for the EcoSport Trend, which sees chrome matted against a full black interior. The dashboard is slanted away from the windshield, giving a more spacious feel to the cabin. It also houses the eight-inch capacitive touch screen which is easy and intuitive to use.

Setting up Bluetooth connectivity was straightforward and the touch responsiveness is much improved from previous models. I still think that the font style and some of the graphics can be improved, but using it was still a pleasurable experience. The screen also doubles as a monitor for the reverse camera, and fortunately, it shows trajectory lines.

To keep things simple, there are four knobs in the centre concole, two for the Sync3 infotainment system and the others for the climate. They also have a rubber outsole, giving them a nice tactile feel.

The seats are manually adjusted. However, at this price mark, this is expected. As for the back, the second row of seats can fold down almost flat, making room for up to 1178 litres.

This is a very economical vehicle to own, especially for persons who live in heavily congested area or have to commute long distances to get to work.