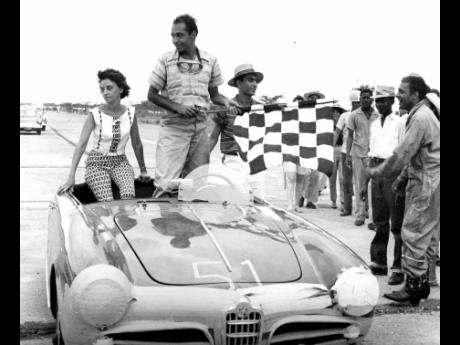 File
In this Gleaner photograph, Richard Sirgany, with the chequered winner’s flag, stands beside his wife Yvonne in the Alfa Romeo he drove to victory in the 55-mile Jamaica Grand Prix at Vernam Field on September 24, 1961. 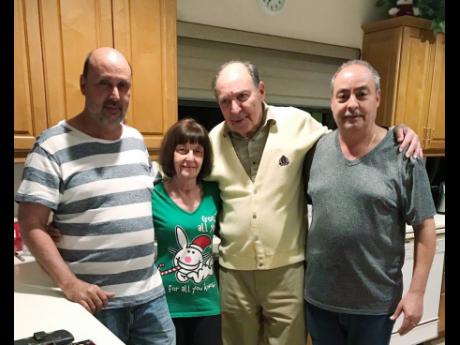 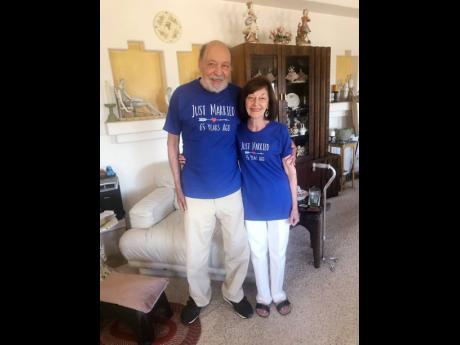 Contributed
As they were in that iconic victory photo in September 1961, Richard and Yvonne Sirgany remain inseparable. Here they celebrate their 65th wedding anniversary on June 24, 2021. 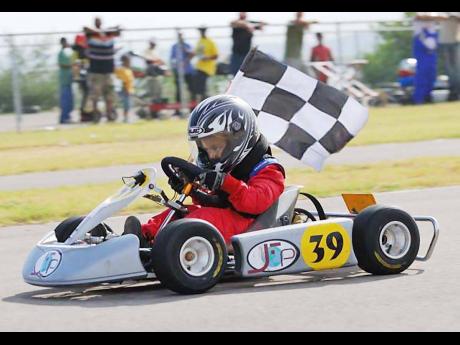 On the diamond anniversary of Richard Sirgany’s victory in the Jamaica Grand Prix at Vernam Field, Clarendon, the 86-year-old national is enjoying life in the slow lane in the southwestern US state, New Mexico.

The red Alfa Romeo he drove to victory in the 55-mile Jamaica Grand Prix on September 24, 1961, belonged to a friend, but it birthed a lifetime of passion for the Alfa and a love affair for racing.

The Daily Gleaner reported that the race was “a thriller from start to finish”, with Sirgany clocking 57 minutes and 6.6 seconds.

Sirgany, who is of Lebanese ancestry, grew up in Kingston and attended Jamaica College.

With a fading memory, he cannot recall the 1961 event or the days leading up to the big race.

“Racing is difficult, but fantastic! Driving is what I loved about it. I had to develop a lot of patience, and racing is a very costly sport,” Sirgany told The Gleaner.

He was a champion in the 1960s, winning many races and medalling in several others.

His wife, Yvonne, accompanied him to every race and ensured that his gears were in check prior to each event.

“I just remember my heart being in my mouth, just very nervous, but once he won the race, they insisted that I jump in the car with him and go around the track, and I did,” she recounted of the race 60 years ago.

“It was really a celebration for us after that. Everybody came to our house and celebrated with us.”

His wife recalled that her husband and a group of young men, including Eddie Nasralla, Sam Haddad, Benny Machado, and Sydney Hassan, thought that the Clarendon site was an ideal location for a race track.

“They cleared the area and started toying around at first, and then it became a serious thing, and they decided to have a race,” Yvonne said.

When Sirgany left Jamaica College, he matriculated to the University of Notre Dame in Indianapolis to study architecture but decided after a year or so that automotives was his line. He enrolled in an automotive school in New York, graduated, and returned to Jamaica and started servicing mostly sports cars and prestige automobiles like Jaguars, Ferraris, and Porsches.

The family left Jamaica in 1966 for the US, where he raced briefly at Watkins Glen, Daytona, Miami Grand Prix, and Sebring.

Sirgany became a partner in Race Incorporated, but when that business closed, he started his own company, Auto Volante Inc, in Miami, which operated for more than 40 years.

There, he serviced exotic cars and built parts for the auto manufacturer Alfa Romeo, repaired Alfas, and prepared several cars that won races.

In the mid-1990s, Alfa Romeo wanted to freshen up the appearance of the GTV6.

Sirgany’s company got the contract to design special body panels that went into production for a limited series of 150 units.

They were marketed only in the US as the GTV6 Maratona.

In March 2009, he closed Auto Volante after a car accident.

Racing has been the lifeblood of the Sirgany family, extending to three generations.

His second son, Stephen Sirgany, competed at Dover Raceway and Rally Jamaica for about two decades and was a champion during the ‘90s.

His grandsons, Justin and Joshua, have also been blazing their own trail, locally and internationally, in go-karting.

Stephen, who is in his early 60s, watched races with his father from a very tender age and got involved in go-kart racing at 16 in Miami.

“When my father almost died in a car accident in Miami, I brought back his car to Jamaica and I refurbished it, and we took it to Dover and he did a lap or two in it. He was quite old, must’ve been when he was 73,” he recalled of the last time his dad went around the wheel of a Phoenix Chasi racecar in May 2009.

Stephen remembers meeting racing personalities with his father and driving a long distance to watch Alfa excel in the World Championships.

And what’s the most important racing lesson he has learnt from his dad? “It can be a brutal sport. You can lead up until the last lap and get a flat tyre,” he told Automotives.

Richard Jr, 62, said that his father was well known throughout the US for his excellent work on Alfa Romeo cars. “He was an Alfa fanatic,” he said.

“It’s always been a racing family, and as children, we were raised around cars. I used to go to school, come home, and go to the shop. He used to take us racing all over the United States,” said Richard.