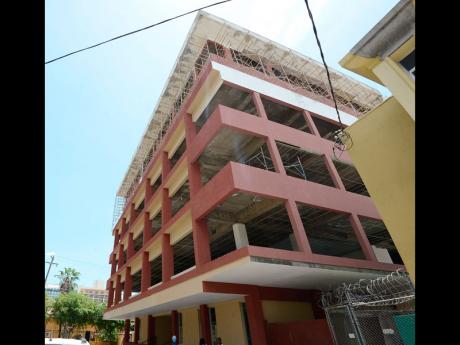 A New Kingston high-rise, whose construction was stalled for more than three decades, is again at the centre of controversy, with a top official on city's building oversight body alleging that the building's current owners, the accounting firm, UHY Dawgen, have resumed work despite a stop order by the Kingston and St Andrew Corporation (KSAC).

But Dawgen's managing partner, Dawkins Brown, was dismissive of the complaint by Christopher Lue, the Jamaica Institute of Architects' representative on the KSAC's building committee, insisting that "we have done what we need to do", although one document remained outstanding.

"We have commissioned an engineering report," Brown said.

While not commenting specially on the reported stop order, Brown added: "I am sure the KSAC is not against development ... . There is no way the KSAC would stand in the way of the renovation of the property."

The building, at the corners of Trinidad Terrace and St Lucia Avenue in the capital's business district, was started in the 1980s by entrepreneur Delbert Perrier, but became embroiled in a long legal battle when the KSAC placed its initial stop order on construction because Perrier, in breach of his building permit, increased its height from four to six floors.

The building subsequently fell into the hands of Perrier's bankers over debt, setting off another set of legal squabbles, which came to an end when Perrier died in the 2000s.

The building was bought by UHY Dawgen in February from Jamaica Redevelopment Foundation Inc, the agency to which the Government sold non-performing assets held by companies it bailed out in the late 1990s. It was formerly referred to as the old Auburn Court building. Brown said his company was spending US$3.7 million both on the purchase and upgrading of the property, each of whose 6,600 square feet floors would be customised for clients. It is to be rebranded St Lucia Towers.

Now, according to Lue, Dawgen has resumed work with all relevant permits and despite a new stop order from the KSAC last month.

In an emailed complaint to Angela Brown-Burke, the city's mayor and KSAC chairman, Lue said: "Construction work continues as a work crew was observed installing aluminium window frames on several levels, this in spite of a cease work notice being served on site on Friday, June 27."

Lue said the issue of the continuing construction was reported and minuted at the July 2, meeting of the building committee and was listed for follow-up at the August 12 meeting of the KSAC. It was not immediately clear what transpired at that session.

Lue conceded that Dawgen had secured approvals from the fire department for their building plan, but explained that a submission to the KSAC was rejected because it did not include an assessment by a qualified engineer.

Additionally, ramps for the disabled were not included in the plans for the main entrance to the building and the entrance identified for underground parking facility was inadequate, and did not provide turning room for motor vehicles, Lue said.