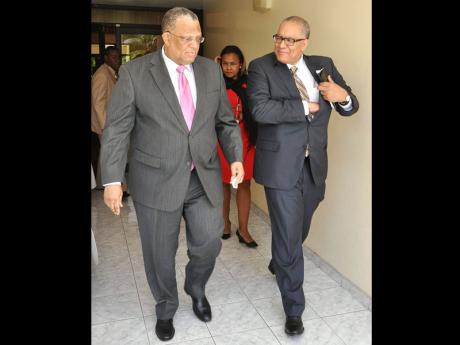 The Government's cash-flow deficits are expected to last until October because of a shortfall in revenues, primarily the result of grants not being drawn from international lending agencies as planned.

The International Monetary Fund (IMF) has recognised that disbursement of funds from other lending agencies will be backloaded. It has, therefore, proposed that money expected to be disbursed this month under Jamaica's economic support programme should now be provided in the form of direct budgetary support.

The arrangement is a departure from the usual provision whereby funds are provided for balance of payments support, which help to restore or create access to support from other creditors and donors.

Disbursement of that tranche, equivalent to US$71 million, however, is predicated on the IMF management and board approving the staff review of the fifth test this month.

In its June 2014 report, the IMF said the programme remained fully financed and staff's assessment of Jamaica's capacity to repay the Fund remained broadly unchanged from the last review.

It added that Jamaica's capacity to repay the Fund will continue to depend on the timely and strong implementation of the ambitious programme. External financing has remained broadly in line with earlier programme assumptions, with international financial institutions disbursements expected to be relatively back-loaded in the current fiscal year.

However, the shift in the outlook for cash flows will create a timing problem for the budget in the first half of fiscal year 2014/15, the Fund said, noting that cash flow deficits were expected until October, including a US$200 million eurobond payment due in October, and cash surpluses expected thereafter.

At the same time, it said, the ability to smooth out the financing need is severely limited by the constraints on domestic borrowing imposed by illiquidity in the government-bond market, alongside the inactive secondary market.

"To handle this temporary near-term cash-flow need, staff proposed that the scheduled June and September 2014 purchases under the extended arrangement should now be provided in the form of direct budget support," the IMF said.

"As a safeguard, the authorities have agreed to establish a separate memorandum of understanding between the central bank and the Government on servicing obligations to the Fund," it added.

The IMF said such budget support would help avoid or limit the need to borrow at expensive rates on international markets or defer budget spending, and help prevent the unwelcome precedent of the central bank offering direct credit to the government, the absence of which has been a critical feature in the Bank of Jamaica's (BOJ) operational independence.

A January 2012 IMF working paper by the Monetary and Capital Markets Department, 'Central Bank Credit to the Government: What Can We Learn from International Practices?', found, among other things, that in a large number of emerging and developing countries, short-term financing is allowed in order to smooth out tax-revenue fluctuations.

The interest in central bank lending to the Government has increased recently during the 'great recession' since a number of governments have turned to central banks for money as government liabilities increased, tax revenues declined, and financing for fiscal imbalances from domestic and international capital markets was expensive or unavailable, the paper said.

It cited, for example, countries such as Bolivia, which approved legislation requiring central banks to temporarily grant credit to the government or public enterprises, or as is the case with Jamaica and Zambia, used extraordinary legal provisions to finance a government's payments of external debt.

Central banks in countries such as Jamaica, Jordan, Mozambique, Syria, Uganda and the United Arab Emirates can provide advances to the government at no cost, the paper said.

Where such advances are not duly repaid, the power of the Bank to grant further advances, in any subsequent financial year, shall not be exercisable unless and until the outstanding advances have been repaid.

It also provides that the bank shall not, in any financial year, purchase or otherwise acquire, on a primary issue, securities issued or guaranteed by the government of a nominal value exceeding 40 per cent of the estimated government expenditure in that financial year, or such other percentage as the House of Representatives may from time to time by resolution approve.