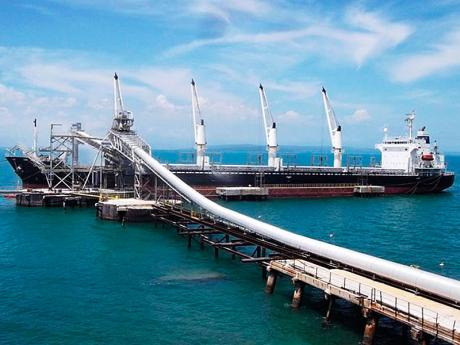 The bulk loader vessel, Cetus Star, docked at Jamalco's Rocky Point Pier in Clarendon as it was being loaded with the first shipment of alumina under the marketing contract between Clarendon Alumina Partners and Noble Resources Ltd in July 2013. Noble Group and CAP are now partners in Jamalco.

Says Noble's acquisition of Jamalco will make the business profitable

Jamaica has formally scrapped the plan to sell its 45 per cent share in the Jamalco alumina refinery now that the London-based Noble Group has acquired Alcoa's majority ownership of the facility, in a deal that Mining Minister Phillip Paulwell says results in Jamalco's "return to profitability" and the clawing back of billions of dollars the Government has lost in the venture.

Paulwell rests much of his optimism on Noble's intention to construct, by 2017, an efficient power plant for the refinery under a BOOT (build, own, operate, transfer) arrangement, which is expected to substantially slash its cost of production and rank Jamalco among the world's more efficient operators, rather than a marginal, or swing producer.

His expectations are also fuelled by an alumina sale agreement, at a higher price, the Government signed with Noble a year ago, as well as Rusal's buy-back, for US$11 million, of the seven per cent stake Jamaica held in its Windalco alumina refinery.

The cash from the Rusal deal was applied to a remaining US$21-million debt Jamaica had to the Russian firm, under an alumina forward sale arrangement with Glencore that turned bad for Kingston when alumina prices plummeted.

"We now stand the real prospect of recouping those losses by the emergence of Nobel in Jamalco," Paulwell said in an interview with the Financial Gleaner.

The Government owns its stake in the 1.45-million tonne capacity plan through a vehicle called Clarendon Alumina Products (CAP), which, at one stage, it was under pressure from the International Monetary Fund (IMF) to divest, to help meet its fiscal targets.

CAP's latest accounts were not immediately available, but in the 2013-14 fiscal year, the company lost J$2 billion, while its accumulated deficits rose to US$250 million (J$28b). Over the past three years, the Government's cash transfer to the company was J$5.5 billion.

The IMF apparently softened its position on CAP's sale on the understanding that the Government would pump no more cash into the venture, a condition Jamaica believes it can meet with Noble seemingly prepared to upfront capital for the plant's modernisation, and without GOJ having to log new debts on its books.

Noble, a commodity trader, had initially said it would buy 80 per cent of Alcoa's holding, which would have translated to 44 per cent of the firm. But in a joint statement this week, the companies announced that Noble, which is listed in Singapore, would take all of Alcoa's 55 per cent, in a deal worth US$140 million.

This will be Noble's first acquisition of a production facility, as opposed to its trade facilitation activities, which perhaps underpinned its decision to enter a three-year deal with Alcoa for the management the refinery at Halse Hall in the south-central Jamaican parish of Clarendon.

For Alcoa, the sale of Jamalco, on which it books a loss of up to US$100 million, continues its strategic shedding of upstream production in favour of products closer to consumer demand.

Mark Hansen, a Noble executive director in charge of its resources operation, is, like Paulwell, upbeat that under the Noble-Jamaica partnership "CAP is on the road to better days".

"We are already a substantial lender and supporter of CAP, and I feel it is in a good improving position that is probably to the benefit of the Government and people of Jamaica to see it through better times," he told the Financial Gleaner.

"We are buying a refinery which we think is positioned best on the island with the best reserves, best workforce, opportunities for modernisation - including energy solution - and we want to become a stewards of that plan and with our partner CAP become a strong, independent local enterprise," Hansen said.

While stressing that Noble was working towards the 2017 deadline for a power plant, Hansen offered no specifics on the size, the fuel it will burn, or the projected investment.

"We are assessing (whether it is) gas or coal," he said "Coal is obviously the cheapest and the fastest option that can be brought to the table."

Noble, Hansen says, "would work closely with CAP and the Jamaican Government to find out how we can effectively and efficiently implement something, because energy is going to be the key part of that business".

Paulwell had separately suggested that the plant would cost between US$150 million and US$200 million to construct which, other sources said, pointed to a facility that would produce between 80 and 100 megawatts of power.

That would mean that Noble would have upwards of 50MW for sale to the national grid and indicates that they are now in talks with the Vin Lawrence-led committee that is now working out the Government's new energy strategy.

Explaining how Noble's BOOT investment in the energy facility would work at the firm level, Paulwell said: "Jamalco will actually be purchasing energy from a plant that has been established, and so that cost would allow Nobel to recoup its investment. And the Government of Jamaica will not be putting a cent in it."

Some analysts, without elaborating on the basis of these projections, argue that a new, cheaper energy to Jamalco, at around US$0.12 per kilowatt hour, would slash the plant's cost of production of a tonne of alumina by around US$50.

Hansen himself did not address the issue of expansion, but provided an analysis of the global economy and the metal markets which hinted that the matter remained in the line of site of Noble executives.

"We believe that the industry is on the upswing. When you look at the economics, we have seen the worst days ... . We have prepared ourselves for the worst and so we know what the conditions are. I think we have seen as bad as conditions can get," said Hansen.

"The oil price is coming down. (That) coincides with bauxite and alumina pieces rising. So I think that there is a chance here that we have seen the worst here in this business cycle."

Hansen also pointed to an increasing consumption of alumina and aluminum, especially in the world's new growth markets.

"There is tremendous growth in emerging markets like China for aluminum products," he said. "At the same time, it is becoming more and more difficult to extract bauxite in certain places. You have countries like Indonesia which have banned raw material exports ... . You have the closure of refineries in places like Australia. When you look at all that, the supply and demand balance is shifting in favour of the producer."

He added: "I think there is a realisation that if you are a major producer of alumina you have to have some security of supply. I think there will be more and more efforts made to do long-term contracts in this business, and Jamaica is an important location globally. It is in a strategically important logistics position and it has excellent resources of bauxite."

Noble Group is a US$98-billion company by revenue. In 2013, the group made operating profit of US$1.4 billion, and net profit of US$243 million.