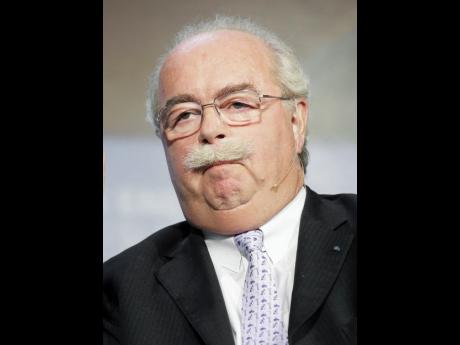 The driver of the snowplough that apparently caused the plane carrying the Total CEO to crash at a Moscow airport says he neither saw nor heard the private jet as it sped towards him down the runway in the dark.

The driver is the only person to have been detained in the deaths of Total's Chief Executive Christophe de Margerie, and three French crew members, who were killed when the Dassault Falcon 50 clipped the snowplow on take-off late Monday and crashed, bursting into flames.

But Russian investigators said Wednesday they now believe that much of the blame lies with the managers of Vnukovo airport, which is used by Russian officials, including President Vladimir Putin, and visiting official delegations.

Investigators accused the snowplough driver, Vladimir Martynenko, of drinking on the job. His lawyer has denied this.

In footage of his questioning shown on Wednesday on Channel One state television, Martynenko, 60, says he didn't notice that he had strayed on to the runway and didn't hear the plane over the noise of the snowplough or see any lights.

"The plane was taking off, and I practically didn't see it or hear it because the equipment was operating," Martynenko, still wearing the blue coveralls that appear to be his work uniform, tells investigators. "There were not even any headlights, or at least I didn't see them. And then there was the hit."

His lawyer, Alexander Karabanov, said his client does not drink and any smell of alcohol could have come from drops that he takes for a heart condition. Martynenko, who has worked at Vnukovo for about 10 years, was not injured in the accident.

Speaking on Ekho Moskvy radio, the lawyer provided a possible explanation for how the snowplough ended up on the runway. He said Martynenko's snowplow was one of several operating together at the time, but he heard a scraping noise, stopped his vehicle and got out to make sure nothing was wrong. When he started up again, he could no longer see the other vehicles because of poor visibility, the lawyer said.

Investigators on Tuesday were quick to pin the blame on Martynenko, while noting that they also were looking into the role of the air traffic controllers. On Wednesday, they took aim at the airport managers.

Investigators were working to get some airport employees suspended to prevent them from interfering in the criminal case and do not exclude further arrests, said Vladimir Markin, spokesman for the Investigative Committee, Russia's main investigative agency.

"It is already clear that the reason for what happened was not at all a horrible, tragic concurrence of circumstances, as representatives of the airport try to portray it, but the criminal connivance of officials who were unable to ensure the coordinated work of airport employees," Markin said in a statement.

The last fatal crash at Vnukovo was in December 2012, when a Russian-made Tupolev careered off the runway, rolled across a snowy field and slammed into the slope of a highway, killing five of its crew of eight who were on board.

Industry experts have blamed some of the recent plane crashes in Russia on a cost-cutting mentality. Insufficient pilot training and lax government controls over the industry also have been named among factors affecting flight safety.

A 2011 crash of a Russian-made Yakovlev in Yaroslavl that killed 44 people, most of them members of a professional hockey team, was blamed on pilot error.

In April 2010, Polish President Lech Kaczynski was among 96 people killed when a Tupolev flown by the Polish Air Force crashed near Smolensk in heavy fog.

Meanwhile, Total's board held an emergency meeting on Wednesday at which they named Patrick Pouyanne as the new CEO.

Prior to his nomination, Pouyanne, 51, had led Total's refining and chemicals division since 2012. He has been with Total since 1997, starting off as head of exploration and production in Angola.